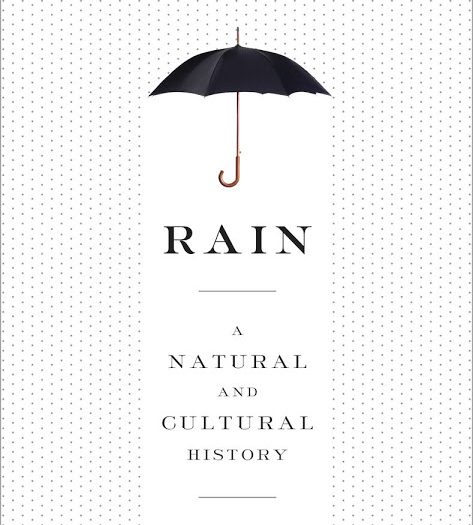 Cynthia Barnett is an environmental journalist and the author of three books on water, including Rain: A Natural and Cultural History, longlisted for the National Book Award and named among the best nonfiction books of 2015 by NPR’s Science Friday, the Miami Herald, Tampa Bay Times, Boston Globe, Kirkus Reviews and others. She has written on the environment for National Geographic, the New York Times, Los Angeles Times, Wall Street Journal, The Atlantic, Salon, Politico, Discover and others. Her other books are Mirage: Florida and the Vanishing Water of the Eastern U.S. and Blue Revolution, which calls for a new water ethic for the nation. She is also environmental journalist in residence at the UF College of Journalism and Communications.

She was interviewed by Eva Liu, a journalist and UF graduate student from China working on her master’s in communications.

EL:  The Boston Globe described your author persona as “part journalist, part mom, part historian, and part optimist”. With several identities in your life, how do you describe yourself?

CB: I like that description from the Globe, because I do identify first as a journalist. But my identity as a mother is also important to me. I didn’t start covering the environment until I was a mother. Sometimes I wonder if, subconsciously, motherhood helped lead me to this field, because I feel even when I’m writing or speaking about something like climate change and I run into someone who denies climate change, I can often have a conversation with them as a parent, or in their case a grandparent, that I might not otherwise have been able to have. So I think it’s part of who I am for sure. And the history is also very important to me, especially in environmental issues. We do tend to forget the past and we tend to repeat the mistakes of the past. So I guess, I, too, would identify myself as a journalist and author, as a mother and someone who is very interested in history.

EL: You mentioned that you had not covering environment until you were a mother. What did you do before that?

CB: Before that I was a traditional journalist. So I started working for newspapers as a general assignment reporter, and I was on many different beats over the years. I covered prisons, I covered high education, I covered business.

EL: For how long?

CB: For around 15 years. And after 15 years, it seemed that every story I wrote kept coming back to water, whether I would be writing about development or working on an investigative story. Many, many paths seemed to be leading me to water, so I applied for a Knight-Wallace Fellowship at the University of Michigan to learn more about water, to try to become more informed. And I ended up becoming very obsessed with water and ultimately leaving mainstream journalism to specialize in the environment and books.

EL: What do you think cultivated your interest in the environment? Was there any special experience that inspired you?

CB: I think I always felt close to nature, and I always felt close to water. But part of this was the journalistic instinct that people don’t know the whole story of what’s happening with water. I would cover meetings and hear things happening that didn’t seem right. Like a company that made its money building desalination plants was advising the local government on building a desalination plant and insisting that this was the only answer, which didn’t seem right, and I wanted to learn more. So part of it was my natural interest in the environment and my affinity for nature, but part of it was a journalistic instinct that this was a really important story that was not told in the right way.

EL: Your three books are all about water. Why are you especially interested in water?

CB: For me, every story comes back to water and every part of life comes back to water. I grew up in Florida and I always loved the beach, rivers, springs, but I even love the swimming pool, and I even love the rain. So yes I always loved water, but I think again, the journalistic piece of it is that every story seems ultimately involve water in some way, especially when you are writing about business or the way your community works, you ultimately will confront water and how we live with water, how we get water and how we clean water. So I guess it was part of natural affinity, and part of a professional obsession that this was a story needed to be better told.

EL: How can you still stay optimistic on environmental issues after you knew there were many problems as you have mentioned?

CB: The way to stay optimistic, say you are covering a terrible case of pollution, like the one in the Indian River, with algae blooms and millions of dead fish, dead manatees, dead dolphins, that is an extremely depressing story – is to remember we have overcome similar challenges in the past. In the United States in the 1960s, many rivers in the industrial Northeast were terribly polluted. Some were so polluted they would catch fire if you threw a match into the river and today we’ve cleaned up those rivers. There are great stories of clean up, for example, of the Hudson River. Here in Florida, our Biscayne Bay, Tampa Bay and Escambia Bay in Pensacola were all some of the worst polluted bays in the entire country, and those are now very much cleaned up, very much success stories. So as you write about pollution today, you have to remember that this is the problem we’ve tackled in the past and that if we worked together, we will be able to do so again.

It’s the same with air pollution, which I know you deal with in China. There was a time when the skies over Los Angeles were very black and air pollution was a chronic problem in this country, and also in England. And people did not want to put up with it anymore and people in America came together and passed the Clean Air Act, which really did clean the skies over Los Angeles and other cities. So we have to remember that we can do these things and we can make changes.

EL: I really like your idea about embracing the water ethic in your books and speeches. What do you think we can do specifically to build this ethic? Can you give us some suggestions?

CB: The idea of a water ethic is just a way to communicate about water. The two problems are that we use too much and pollute too much. So the idea of a water ethic is that we come together to use less and pollute less. We have to use water today in a way that doesn’t jeopardize water for the next generation. And there are positive examples all over the world of people who have come together to use a lot less water and to pollute less. In my book Blue Revolution, for example, I travelled all over the world to tell stories of cultures that used to be quite wasteful and now use far less water than they used to. And this was not painful in any way. It’s just a matter of living differently and I think it’s important to focus on those optimistic stories and show people who have actually done this, so that we can be inspired.

It’s almost like a democratization of water. Water has too often been in the hands of water managers, water lawyers, environmentalists and engineers, but really, water needs all of us.

EL: You work as a teacher, a journalist and you also write for National Geographic and other websites, how do you manage your time?

CB: Ha, not very well. It’s very hard. It’s hard to juggle freelance journalism, writing books, teaching and motherhood. It’s probably too much. But I care very much about all of it. And the teaching has been nice, because when I was only working on books, it was very isolating and I was often alone writing in my office and I would go many days without seeing anyone or talking to anyone. It is hard to concentrate on my books when I’m teaching. So what I’ve worked out for the future is that I will teach one class a year and that would be in the fall. So from January to July, I will work on my books. And every fall, I will have this nice experience of teaching and being around young people.

EL: So you also plan to write new books?

CB: Yes, I plan to write another book. My new book idea involves seashells and climate change. I want to tell a story about the human relationship with the shell, and ultimately it will be a story of climate change. Just like Rain, the idea is that by writing about a topic with which people are intimately familiar and fascinated with, like seashells or like the weather, we can draw them into a larger conversation.