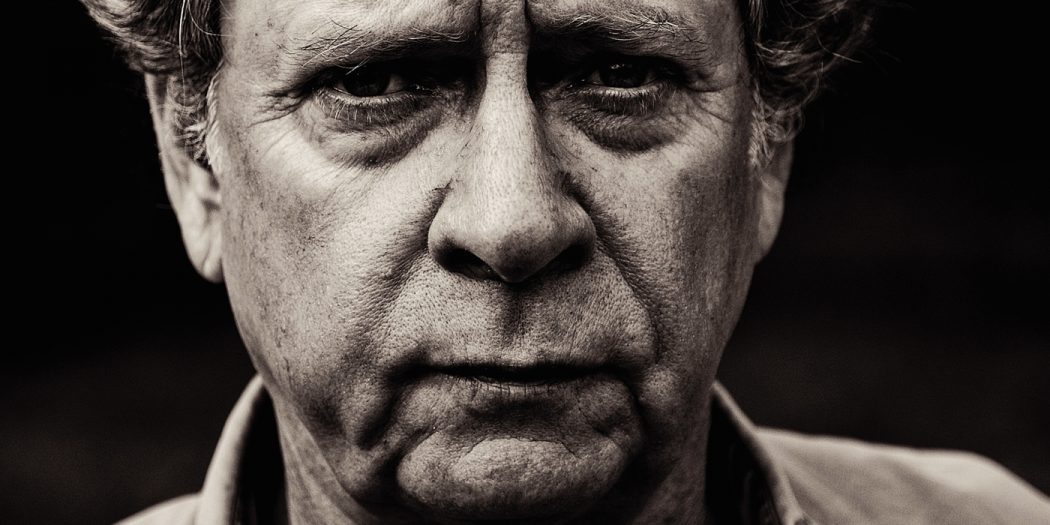 Padgett Powell is the author of The Interrogative Mood.

Padgett Powell is the author of six novels, including Edisto, which was a finalist for the National Book Award, and two collections of stories. His writing has appeared in the New Yorker, Harper’s, and the Paris Review, as well as in The Best American Short Stories and The Best American Sports Writing. He has received a Whiting Writers’ Award, the Rome Fellowship in Literature from the American Academy of Arts and Letters, and the James Tait Black Memorial Prize. He lives in Gainesville, where he co-directs and teaches at MFA@FLA, the University of Florida’s creative writing program.

Powell was interviewed by Elliot Reed, an MFA@FLA student, during a walk through Barr Hammock, a wet prairie outside Gainesville, on the lookout for cottonmouths.

ER: What story will take up the next fifty years?

PP: I’ll write the second chapter of the indigo book.

ER: What is the second chapter?

PP: An indigo I captured died in captivity. She was to have laid eggs for propagation of the species. I had a foreboding when I captured her and in fact had a night alone with four gravid females to be sent the following day to Auburn. I made a movie of the snake I captured, the one who died in the lab, for her posterity. Then she died and for a goodly while they did not tell me. When I heard, I was distraught.  She had been named Padgette, for me, her captor. They said, “Hey, man, it’s okay, this happens in nature too.” I said: “This did not happen in nature. This happened at Auburn University.”

ER: What will be the third chapter?

PP: I won’t ever complete Chapter 2, “Padgett killed Padgette.” You think you could write that?

How did you come to the indigo story?

You read that in the indigo piece, which we are now perversely calling Chapter 1.

PP: You’re standing on a stump. You’re not trying.

PP: He won’t be if we can make a moccasin sandwich of him.  What is your favorite sandwich?

ER: I think it would be pate and fusilli and anchovie, but good pate is not–

PP: A moccasin sandwich is better than pate and fusilli and anchovie.  Hard to prepare though.  Easily the best sandwich I have ever had, close second the whole-bream sandwich with soft white bread.

ER: I heard they did a study where they took a fake boot on a stick and stepped on cottonmouths with it and the snake only struck around one out of three times that a boot stepped directly on it.

PP: You are supposed to fry the moccasin live, as crabs and lobsters are boiled live. They are harder to handle than the crab. Also, they tend to curl up when they hit the oil.  Moccasins are rather benign-acting, really. The vipers in general are, because of the firepower.

ER: What’s that making all that commotion in the duckweed?

PP: Sounds like a snake with a frog. Nope. It’s baby alligators. They’re striped when they’re young. Hear that? That little oinking?  That’s a baby alligator.

ER: Does that mean there’s a mama nearby?

ER: There was a bird there a second ago and now there’s not a bird there.  The bird is in the death roll. It’s been taken under by the gator.

PP: There’s your bird. Got free of the death roll. (Points to heron flying in to land.)

ER: Talk a little about a formative nature experience you’ve had.

PP: I once took a live grill in a canoe through the Okefenokee swamp. Kept it hot in the boat for a week. Baking a cake. After a week it was still gooey.  When the moccasin curls up and stiffens from the cooking you can’t get him straight again to lie nicely in the bread.  A good long Italian loaf or baguette is what you want.  Matched to the snake–you know, three-foot snake, three-foot bread.  The snake must be cooked very hard to dissolve the bones some and make sure the organs are fixed.

ER: You don’t gut it?
PP: You can’t if you are cooking him live. Would you want to try to gut one alive?  Didn’t you tell me your uncle let you get bit by a copperhead?  A moccasin is a copperhead to the third power.

ER: Why do you have a trebuchet in your yard?

PP: My daughter was running with a handy Lake City boy and she got him to build me one.  If you ever get access to one, throw a milk jug filled with gasoline.  Tie a rag wick about a foot from the jug, something that won’t blow out.  The mushroom cloud from the explosion will be perfect, black, and the size of a two-story house.  Environmentalists who see this will drive to go get more gas.  People will pee in their pants a little and laugh with each explosion.  They will make suggestions for loading the trebuchet faster.