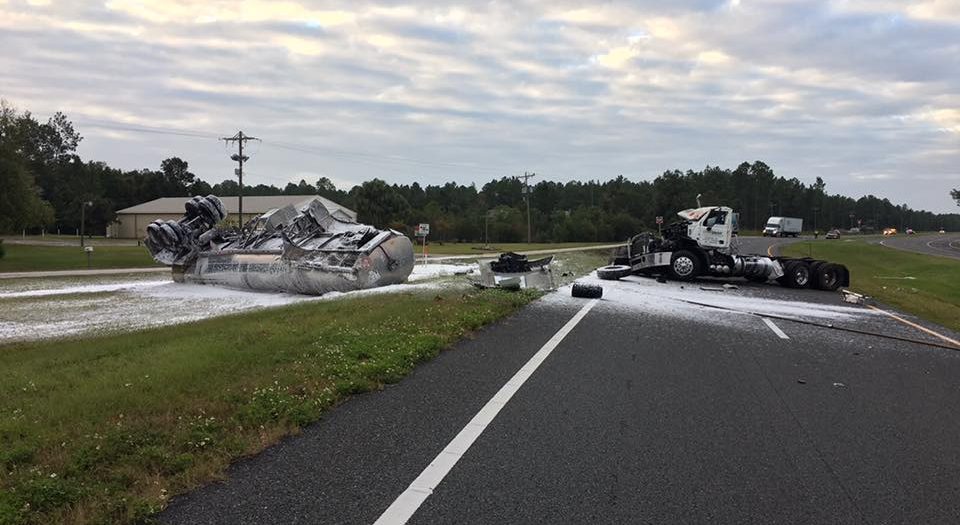 By Briana Erickson and Laura Cardona

In October, a man died when his truck flipped, spilling 8,000 gallons of jet fuel near Waldo in North Central Florida.

In November, two trains collided in Marion County, sending thousands of gallons of hazardous material into the soil, including 77 gallons of sulfuric acid.

These two accidents reflect an unfortunate reality in Florida: Hazardous materials spills have changed very little in the past 15 years, when compared to population.

As with all hazardous materials, spills could have significant environmental and health effects; such spills can infiltrate drinking water and lead to increased incidents of cancer and other diseases.

On the other hand, accidents are inevitable any time hazardous materials are transported on highways and train tracks.

An analysis of hazardous materials reported by the U.S. Department of Transportation and compared with state population data show that incidents fluctuate within a fairly narrow range.

While these accidents persist, the Florida Highway Patrol enforces action on whether or not trucks carrying hazardous materials are permitted to be transporting them by the Commercial Vehicle Enforcement Bureau, said Lt. Patrick Riordan, FHP spokesman.

Most of what is regulated happens after an accident occurs, said Gus Olmos, water resources manager for the Alachua County Environmental Protection Department. The severity of a spill depends on the type of material and where the incident happened.

In the case of October’s jet fuel spill, Olmos said his department was able to quickly work with clean-up teams to minimize the damage. This kind of spill can leave detrimental impacts on the environment and on human health.

“Eventually, it would get to the groundwater and somebody’s well, because of the rain,” he said. “That’s why we concentrate on getting there fast — making sure all the contaminated soils are removed.”

When an accident happens, a report is usually made by the responsible party. The freight trains from the November derailment in Marion County were owned by CSX Transportation.

As per an incident report from CSX Transportation, the derailment caused the release of about 1,346 tons of coal, 1,150 tons of phosphate (fertilizer), 7,400 gallons of diesel fuel, 77 gallons of sulfuric acid from locomotive batteries and 10 gallons of locomotive lubrication oil.

The report also stated that neither train was carrying hazardous cargo, and the spill did not affect a local waterway or drinkable water source.

According to CSX Incident Prevention and Response Protocols, moving hazardous materials by rail is the safest surface transportation method and is preferred to highway travel.

The Florida Department of Environmental Protection was on scene when the 8,000 gallons of jet fuel spilled near Waldo, said Russell Simpson, spokesman for the department’s Northeast district.

Soil was excavated from the scene and will be followed up on to make sure it doesn’t infiltrate the groundwater, he said. The incident report from the responsible party is still pending.

While there aren’t efforts being made by the department to reduce these accidents, the emergency response staff is engaged in role playing and drill processes to stay up to speed if a larger-scale emergency takes place, Simpson said.

Simpson, who has worked for the department for 30 years, said that accidents involving hazardous materials occur roughly five to 10 time times a month in the Northeast district, which includes Alachua, Duval, Bradford and Clay counties.

“Fortunately, for this incident, all of the discharge was contained in a drainage ditch and recovered,” Simpson said. “This has a good ending.”

Briana is a reporter for WUFT News and can be contacted by calling 352-392-6397 or emailing bri.rose561@gmail.com.
@brianarerick
Previous Florida May Let Some Death Row Inmates Avoid Executions
Next Exiting Justice Rails On “Discriminatory” Death Penalty