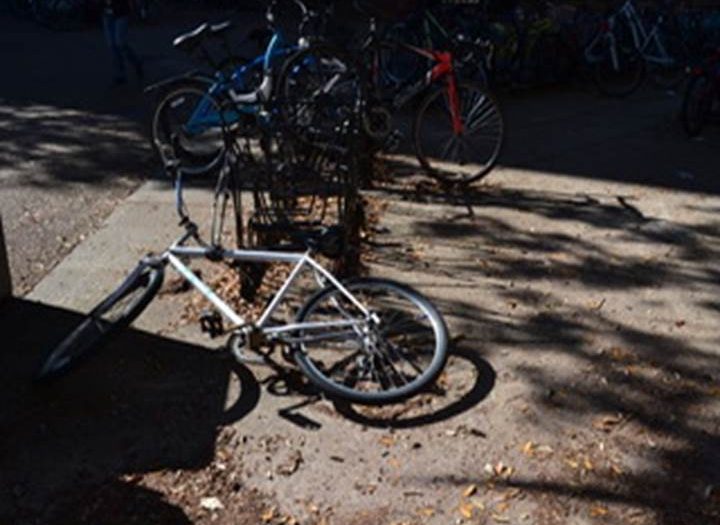 At the beginning of each school year, some students lock up their bike in what seems to be the most convenient space. Many never return to retrieve the bike. (Monica Humphries/WUFT News)
Home / Getting around / Gator Gears’ Swamp Rompers Take Campus By Storm

Manuela Escobar locks her bike onto a ramp railing leading up to Turlington Hall, one of the busiest areas on the University of Florida campus.

She’s heading to her 4:05 p.m. class in forensics, and by the time she reaches the ramp, three other bikes have been tethered to both sides of the railing.

Escobar and the three other cyclists likely don’t think of the repercussions of using ramps as bicycle racks. Students with disabilities use these ramps daily to get to class, and bikes can often prohibit or hinder students from getting to class.

Part of the reason is the number of abandoned bikes at UF, said Jacob Adams, officer manager at the Office of Sustainability.  At the beginning of each school year, some students lock up their bike in what seems to be the most convenient space. Many never return to retrieve the bike.

Escobar sometimes locks her bike in the wrong place, but she is also part of the solution. She won’t be abandoning her bike when she no longer needs it. That’s because she’s renting the bike through UF’s Gator Gears program, initiated in fall 2015 to give UF students another option for sustainable transportation while reducing the number of abandoned bikes clogging campus bike racks.

Although UF’s Office of Sustainability does not yet have the data to show that Gator Gears is reducing bike abandonment, the program was so popular during its first year, 2015-2016, that UF doubled the number of bikes available for 2016-2017.

Some students discover locking, unlocking and looking for a rack is too much of a hassle. Some bikes break and students don’t have the knowledge or desire to fix them. Some students prefer to take the bus, car or scooter, and some have family members who bought their student a bike when he or she didn’t want one.

When students discover that they won’t use their bike, they don’t know what to do with it, he said. So they leave that bike on a rack that regular bike commuters could be using.

“Outside of dorms and outside of popular buildings on campus, if you have half the space taken, it can be a real hindrance to people,” Adams said.  “It will keep them from riding their bikes in the first place because it is inconvenient to park a bike.”

Each semester, a group of staff spends an average of two days removing the unwanted bikes, said Officer John Savona from the Community Services Division of the University of Florida Police Department.

The bikes that look worn down or unused are tagged with a neon orange band. If the owner does not remove the band in five days, the bike is relocated to a holding lot where it sits for 30 days.

Savona said the bike survey usually involves three officers from the community division, the captain, and seven to eight members from the UF Physical Plant Division, and they try to tag bikes two or three times a year.

“We’re talking about many, many hours we’re paying police officers who could be doing other things in the time that bikes are waiting on the racks,” Savona said.

After that, the bikes posted on the UF surplus page, www.surplus.ufl.edu, and auctioned off in groups of 10 to 15 bikes. Local bike shops often buy the abandoned bikes for parts. 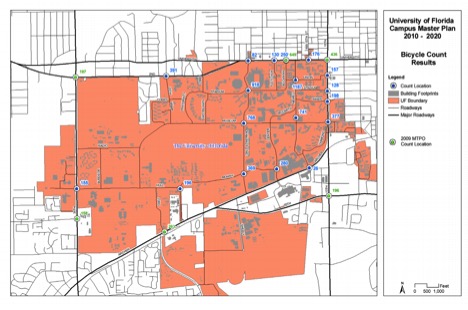 Escobar agreed that there aren’t many transportation options. She said a scooter or car can take you to the outskirts of campus, but once you’re on campus, the only option is to walk.

That’s why she got a Gator Gears bike.

The Office of Sustainability considered several options for providing students sustainable transportation and decreasing the number of abandoned bikes. Like a number of college campuses nationwide, the solution UF chose was to provide the bikes.

Beyond these two systems, colleges can make the decision to use an established business to provide bikes or provide the bikes themselves.

The Office of Sustainability at the University of Georgia partnered with its campus libraries to provide students a bike-share program. About 50 bikes are stationed at the two campus libraries for students to check out for the day. A group of interns comes out every other day to do maintenance and check on bikes.

“I’ve stopped so many students using the Bulldog Bikes to see if they like them,” said Jason Perry, the program coordinator at UGA. “The response has been incredible.”

The fact that IWU is a school of about 2,000 students made the program a lot more manageable, said Michael Gorman, the IWU’s bike committee chairman.

The program started with six abandoned bikes refurbished for student use.

All six bikes were checked out every day, Gorman said, so the university decided to expand the program. It added 10 Schwinn bikes, each costing about $2,500.

Gorman said the response has been great. This fall semester there have been 1,062 bike checkouts.

The UF Gator Gears system was based on research from an Ohio State University bike-sharing study. It found that 38 percent of students said they would use a bike daily or multiple times a week, and 35 percent would use it a few times a month.

Based on how frequently students would use a bicycle and other factors at UF, like campus size and budget, the Office of Sustainability decided on a bike-rental program.

The positives of having a rental bike long-term is the ability to take it on and off campus, less maintenance time because the system is based on a request system, and the office owns the bikes, which allows for the potential to break even or make a profit.

Each bike cost the office $208. Compared to working with a company that provides the bikes and maintenance, UF is saving quite a bit of money, Adams said. An outside company, like Zagster or B-Cycle, can charge about $2,500 a bike and $1,500 year for maintenance, Adams said.

One of the challenges of starting your own bike-rental program is finding the right people. Adams has a background in bicycles, and he found two interns with similar knowledge.

“It ended up being a perfect storm,” he said.

The office designed the bikes, and they were imported from China and put together by staff. Putting together 200 bikes may seem like a daunting task, but Adams said it wasn’t bad, which isn’t surprising considering the two bike gears tattooed on his thigh.

Adams said it isn’t likely that he’ll be assembling any more bikes in the near future. The office has decided to keep the number of bikes at 200.

“Maybe some day we could get to 500 bikes.” But for now the office wants to see continued student response and the durability of the bikes after a few years.

The bikes are called Swamp Rompers, and they feature a brown leather seat, brown handlebars, a light-blue frame and a basket. Renting a bike costs $40 a semester and $30 for each additional semester.

The style was one of the many aspects that attracted Matthew Douglas, a freshman at UF.

He saw the Gator Gears tent set up in Plaza of the Americas and later that week signed up for one online.

“I was going to rely on walking and busing because a bike was too bulky to bring,” he said.

His handlebars have faded from riding, and he’s gotten a flat too many times, but overall he’s enjoyed having the bike, he said.

He also said he likes how affordable it is.

Adams said it costs a lot less for a student to rent a quality bike than buy a cheaper bike from Walmart or Target. And he’s hopeful the program will decrease the number of abandoned bikes.

The numbers change depending on the locations from which the bikes are removed, said Savona. If a facility or staff member notices abandoned bikes in one area, they can call UFPD to come do a sweep for abandoned bikes. If no one requests an area, UFPD checks highly trafficked areas once a semester or twice a year.

This past May, UFPD gathered 263 bikes across campus. The previous May, 210 bikes were picked up.

“On a good bike pickup day, you could have three to four hundred bikes,” he said.

Although the Office of Sustainability cannot provide definitive numbers to prove that the rental bikes have decreased the number of abandoned bikes on campus, representatives of similar programs from other college campuses agree that bike-share programs can reduce bike abandonment.

Clark University, with a student population of just more than 2,000, has seen a decrease in abandoned bikes since its bike-share program launched in 2014, said Taylor Miller, the lead mechanic for CU’s Cycles of Change.

“We really market our bike-share program to new students,” Miller said. “It does effect people, whether they bring one or not.”

The University of Virginia, which has a bike-share system with 21 stations and about 120 bikes, also has seen positive effects from the bike-share program, said Jonathan Monceaux, assistant director for Transportation Services.

“Our volume of abandoned bikes is so high, we can’t get rid of them fast enough,” he said.

But the bike-share system has the potential to curtail those numbers, he said. UVA has similar numbers compared to UF, about 200 bikes every semester, Monceaux said.

“It hasn’t made a huge impact just because the system hasn’t been in place for a while,” he said. “But I can see it having an impact in the future.”

Megan du Treil, a senior at the University of Florida, abandoned her purple Schwinn bike after she purchased a newer bike, better fit for Gainesville.

“I lugged my purple bike all the way from Sarasota to Gainesville,” she said. “And it just wasn’t what I needed.”

After her first semester, she decided to purchase a higher quality bike, leaving the old one outside her dorm.

“I locked it to a rack and never looked back.”

Douglas said he likely would’ve left his bike after graduation if he hadn’t rented one.

Escobar, mentioned at the beginning of the story, agreed. She rented a Gator Gears bike after a friend referred her to the program.

“At home I just used my car, so I didn’t have a bike to bring,” she said. “But if I did, I doubt I would’ve brought it back home.”

She said she plans to use Gator Gears for the next four years.

In September of 2009, a study done by Renaissance Planning Group found that 32 percent of people get to UF in a single occupancy vehicle, 23 percent use a transit system, 21 percent walk, 10 percent carpool, 8 percent bike and 6 percent scoot, motorcycle or moped to campus.

About half, 48 percent, are driving to campus compared to the 6 percent biking.

Although many diving distances are too far to ride a bike, some of the drivers could be biking, Adams said.

Escobar said she had considered buying a scooter for UF, but once she got to campus, she realized that a bike could get her to all the same places and closer.

“It’ll take me to class in five minutes, when it might take someone 15 to walk,” she said. “I get to spend a lot more time sleeping in.”

Monica Humphries is a reporter for WUFT News and can be reached at 407-256-6899 or monicamh@ufl.edu.
@https://twitter.com/MonHumphries
Previous State Awards Another Marijuana License
Next Florida May Let Some Death Row Inmates Avoid Executions

Ocala’s International Airport plans to formally open its new general aviation terminal to the public on Feb. 28, marking a period of growth for the facility. Despite this, the return of passenger flight to Ocala is not on the radar.