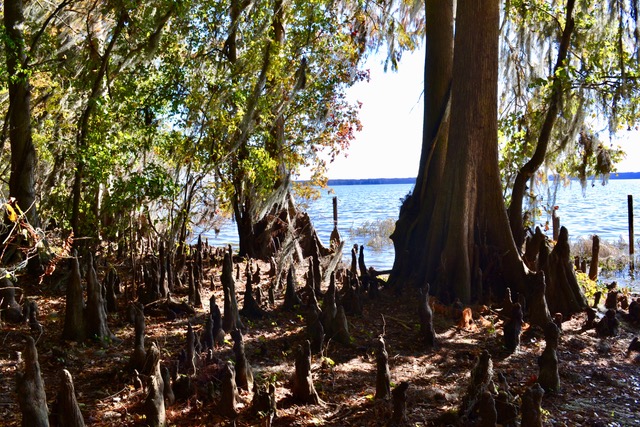 For the Love of Cypress

Cypress forests are some of the most iconic landscapes in natural Florida, with thick-bottomed trees soaring skyward to a gorgeous green canopy that turns deep red as the seasons change.

People think this red beautifies a front lawn or parking lot. But the real beauty of cypress is found in the forest.

These whimsical trees are iconic to the Southeast. But as they are cut down and ground up for mulch, many scientists and tree-lovers worry about a crucial ecosystem being lost to landscaping tastes.

Cypress trees are a critical habitat for migratory birds and native wildlife. They also have a direct impact on humans.

When cypress surround coastlines, they protect these areas from the effects of storms. Cypress forests act as buffers, weakening a hurricane or other surge. That protection is crucial as the Southeast experiences stronger storms in an age of climate change, said Jack Putz, a biology professor at the University of Florida. Yet, the forests are disappearing as Southeastern hurricanes are reappearing. Cypress mulch is one of the culprits.

In Florida, 129,000 tons of cypress mulch are produced a year. Immature cypress trees are targeted for mulching to avoid felling the largest trees, but that can have lifelong impacts on an ecosystem, Putz said.

Yet each day, more trees are felled and ground up and mulch is packed in trucks, stacked in aisles and sold at cash registers. Putz said many people simply don’t make the connection between the product and the stately tree. For about $3 a bag, it’s not surprising that homeowners keep using it.

Part of the problem is that consumers have misperceptions about cypress mulch and its suitability, said Hollie Dutcher, an environmental science senior at UF who did a research project on mulch. Originally, cypress mulch was a byproduct that came from the century-old trees. When the trees were turned into furniture and lumber, unused portions were sold as mulch. This mulch was mature and had different characteristics than the young trees harvested for mulch today. The original mulch earned a reputation for lasting a long time and not attracting insects. But research shows that the cypress mulch on the market today is not so resilient.

Wal-Mart, Home Depot and Lowe’s are the three main sellers of cypress mulch.

Each company has sustainability initiatives, such as Home Depot’s “Ethical Sourcing” policy that ensures its wood is not sourced from endangered rainforests. Instead, Home Depot sources products from “plentiful North American forests,” according to its website. But the sale of cypress mulch runs counter to the goals of sustainable forestry, Putz said.

While Wal-Mart announced it would stop selling cypress mulch from Louisiana swamps a decade ago, cypress-lovers and scientists in other parts of the southeast have not been able to raise similar attention in Florida and neighboring states. Demonstrations and thousands of postcards sent to the big-box stores have not made a difference, Putz said. Likewise, the three companies didn’t return numerous emails or calls for this story.

However, homeowners and business owners who want to landscape more sustainably have plenty of alternatives – and they’re cheaper than a trip to Lowe’s.

Gainesville Regional Utilities also offers free wood chips, byproducts of routine trimming around powerlines.  Residents who fill out a woodchip recycling application can have an entire load delivered right to the front yard.

Another alternative is melaleuca mulch.

Melaleuca is an invasive tree introduced from Australia that’s taken over many wetland ecosystems across Florida.

“There’s a much better tree for mulching and that’s the melaleuca tree,” said Mark Brown, a UF professor in environmental engineering sciences.

The melaleuca tree is generally seen as a harmful species across Florida, and foresting these trees for mulch encourages action, Brown said.

“It’s exotic and invasive, and we need to get rid of it,” Putz said.

A bag of pine bark is just a few pennies more than a bag of cypress mulch. And all options are relatively similar in price, Putz said.

But the best option isn’t in a store – it’s using no mulch at all, said Catherine Bowman, president of the Florida Native Plant Society.

FNPS encourages Floridians to plant and grow native plants. “Many are surprised to learn that you don’t want mulch,” she said. “You want the plants to re-seed and grow.”

The FNPS is working to inform the public that mulch isn’t necessary, and that cypress mulch is particularly unsuitable.

Cypress mulch is not preferred when FNPS hands out landscape awards, and the unsustainable practice is discussed during events and meetings.

“With the native plants, we’re trying to add back plants that you don’t have to force to grow and that don’t need mulch,” Bowman said.

These native species are part of what makes Florida’s nature so unusual and so beautiful – along with iconic cypress.

The birds that fill the sky and Florida’s aquatic life simply wouldn’t flourish without these 500-year-old trees.

Monica Humphries is a reporter for WUFT News and can be reached at 407-256-6899 or monicamh@ufl.edu.
@https://twitter.com/MonHumphries
Previous Scott Taps Conservative Lawson For Supreme Court
Next Student’s Stress Puts Strain On College Mental Health Centers

Avoiding A Florida On Fire: The Importance Of Prescribed Burns

When you visit Gainesville’s creeks, it’s easy to hear the chorus of rushing water running …