Circling The Answer: How A Roundabout Might Save Your Life

Sydney Sokolsky had no time to react.

She and a friend were headed southbound on Southwest 34th Street at about 4 p.m. on a Wednesday afternoon in mid-February 2015. Sokolsky had the right lane to herself as she sped south toward Target on her recently purchased red scooter. Then a Chevy Cobalt, whose driver couldn’t see the scooter in the heavy traffic, suddenly turned left in front of her.

“I just remember being on the ground and not able to move,” she said.

The crash launched her friend off the scooter. Sokolsky’s head smashed through the windshield of the Cobalt.

Seeing her own blood on the asphalt distracted Sokolsky from the head trauma, shattered jaw and broken femur.

“I guess I kind of compare it to when you touch something so hot, its cold,” Sokolsky said. “It was so painful that I couldn’t really feel it.”

For a while, she was lucid enough to answer the questions of bystanders who tried to evaluate her brain injuries while the ambulance was in route.

But on her way to the hospital, Sokolsky slipped into a coma. She was in the ICU for five days, forced to drop her college classes.

She’s been out of the hospital for more than a year now, but despite her brain trauma, she remembers what she believes caused the accident: the combination of rush-hour traffic and the poorly designed intersection at Southwest 19th Avenue and Southwest 34th Street in Gainesville. The intersection design gave the Cobalt driver, a rushed UF student on her way to an internship interview, the impression that traffic had stopped, leading her to believe she had time to turn left.

But one similarly sized city has taken a unique approach to curbing the number of crashes at intersections: replacing traditional intersections with roundabouts.

Since the first roundabout was built in Carmel, IN, in 1997, city officials say the roundabouts have reduced crashes at intersections — by 80 percent for injury-producing accidents and by 40 percent for accidents overall.

The Indianapolis suburb has about 86,000 residents, roughly the same as Gainesville’s (128,000) after adjusting for the University of Florida’s enrollment of about 52,000.

David Huffman is the street commissioner for Carmel. He said one reason so many drivers have trouble traversing intersections is that they create what engineers call conflict points, a space within the intersection where two vehicles might cross paths. 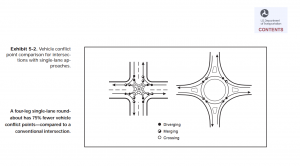 “In a regular four-way intersection,” Huffman said, “there are 32 points of conflict where you could potentially have an accident.”

That means 32 points in the intersection where two cars would have to cross the same area and possibly come into contact. Roundabouts have only eight conflict points, 25 percent of the number in a standard intersection.

Huffman said intersections with traffic lights are also dangerous because drivers fly through them at high speeds, which limits reaction time for both drivers and pedestrians. An average intersection also carries 16 conflict points at which pedestrians could cross paths with a vehicle, compared to eight at a roundabout.

Problem intersections combine conflict points with high-density areas, like Southwest 34th Street between West University Avenue and Southwest 2nd Avenue, which Gainesville police say was the location for 41 accidents between mid-July and mid-August.

Skinner said left turners are particularly vulnerable. More than half of cross-path accidents occur when left turners try to move into and across lanes at intersections, according to U.S. Department of Transportation data. That’s what the driver of the Cobalt was doing when her car struck Sokolsky.

Five intersections were the site of 21.6 percent of all collisions from July 20 – Aug. 17, 2016, Gainesville Police Sergeant Mike West wrote in an email.

How Gainesville can learn from Carmel

After growing up in Indiana and graduating from college, future Carmel, IN, Mayor Jim Brainard had the opportunity to visit England during law school. It was 1981 at the Magdalen College of Oxford University, and the expatriate noticed something profoundly different about the way people got around across the pond.

He realized many of the roads he was riding on had no traffic lights. Instead, the medieval city’s timeworn roadways convened and coiled around traffic islands garnished with greenery. Brainard was struck by how much better these roundabouts kept traffic flowing, softly sweeping cars into their circular grooves and sending them smoothly on their way.

Brainard said he realized then that traditional intersections in the United States ought to be replaced.

Thirty-five years later, he’s doing just that as mayor of an Indianapolis suburb that is systematically replacing typical intersections in favor of roundabouts.

After he was elected mayor in 1995, Brainard said, the idea wasn’t an easy sell.

“Initially, (the reaction) wasn’t good,” Brainard said. “But we did the research. We had our facts together. We were building a new road along the east side of Carmel, just away from the settled area a bit. We put roundabouts on that street, and people loved it.”

In November, Carmel celebrated the installation of its 100th roundabout, more than any city in the United States.

And the city has actually saved money by phasing out traditional intersections. The city’s engineering department reports that building a roundabout costs about $125,000 less than a signaled intersection, with long-term savings due to less maintenance.

But it’s not only the city government that is saving money. Carmel citizens now pay some of the lowest car insurance rates in the state, with their average annual premium the eighth lowest of Indiana’s 50 largest cities, according to a 2014 study by consumer finance website ValuePenguin.

The same study shows that Carmel’s $718 average premium trounces Gainesville’s $961. Carmel’s average is lower than averages in any of Florida’s 75 most populous cities.

“The Insurance Institute for Highway Safety has done studies on this and found that there is a reduction in ‘injury crashes’ between 70 to 80 percent with intersections that utilize roundabouts,” Quinn said.

But roundabouts aren’t a magical solution to all intersection issues.

“You wouldn’t use a roundabout on an arterial (road), let’s say Archer Road,” Posadas said. “The whole purpose of Archer Road is to move traffic east and west. You would use a traffic signal there.”

Posadas said small intersection roundabouts aren’t practical either because a large vehicle like a bus or fire truck might have too large a turning radius and could get stuck.

To install a roundabout in a smaller intersection, you’d have to widen the circle, which could mean tearing up sidewalks or the city having to purchase private property, Posadas said.

The construction process for a roundabout also can cause trouble for residents. In 2012, a transportation study by Kansas State University researchers noted that Carmel business owners’ chief complaint about roundabouts was disruption during construction.

But despite the disruption, the same study also found that 71.4 percent of survey respondents in Carmel like the roundabouts, while 7.1 percent don’t like them and 21.5 percent are neutral.

Mayor Brainard said he can tell that the public has responded positively to the sweeping safety measures.

“The only fights we have, now that we have 97 roundabouts, is who’s gonna get the next one,” Brainard said in September.

Gainesville currently has 16 roundabouts, and while it doesn’t measure how they affect accident figures as Carmel does, city officials are optimistic about their benefits. Gainesville police officer Cory Martin has been a member of the unit’s traffic safety team for 18 months.

“Based off of what I’ve seen at certain intersections (that) have been outfitted with roundabouts since I’ve been with the city, there’s been a decrease in crashes at those intersections, such as Southwest Depot Avenue and South Main Street,” Martin said.

“Whether there’s a green or yellow (light), people speed up to make certain that they get through the light,” he said. “If somebody makes a mistake and hits a blind person at 50 miles per hour, gunning through a stoplight, they’re dead.”

The stop-and-go of intersection traffic also annoys Brainard, who noted that intersections can reduce fuel efficiency and increase the odds of distracted drivers taking their focus off the road.

“Many times a civil engineer’s answer to capacity or congestion issues is ‘Let’s add more lanes.’ That works for a while,” Brainard said, “but all you’re really doing is creating a bigger parking lot to get more cars through the green cycle of the light.”

By forcing drivers to come to a complete stop and then resume driving speed over and over, intersections lower fuel efficiency and even have the potential to create gridlock, Brainard said.

Gridlock is what Sokolsky said caused the driver of the Cobalt not to see her scooter during 4 p.m. traffic in February 2015.

“With all the traffic that there is on 34th, where there have already been so many other scooter accidents, having cars try to see all lanes of traffic when it’s that busy is just impossible for everyone,” Sokolsky said.

She still has glass shards in her jaw to remind her. 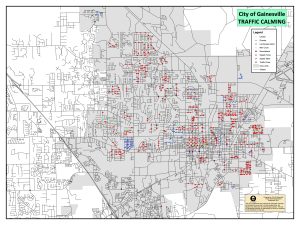 Matthew is a reporter who can be contacted by calling 727-492-1319 or emailing mattbrannon35@gmail.com.
@@MattB_727
Previous Alachua County Moves Forward With Legal Action Against City Of Gainesville
Next Ethics Commission Finds Probable Cause In six allegations against former Gainesville Mayor Ed Braddy.

At 3:15 a.m. the morning after Thanksgiving Day, ArchAngel Gunsmithing and Outfitters was broken into. …