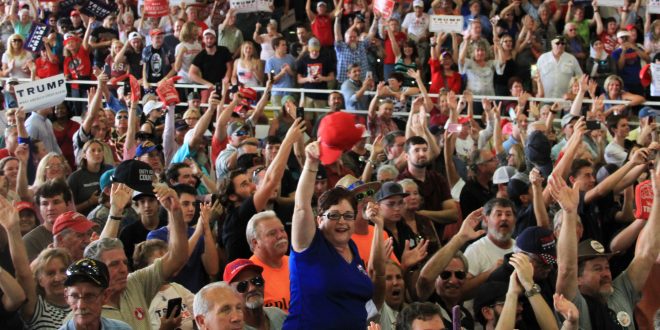 Donald Trump supporters cheer during a rally in Ocala in October. Turnout from Florida voters in this year's presidential race exceeded some predictions that said turnout would drop because of dissatisfaction with both Trump and his main opponent, Hillary Clinton. (Alex Sargent/WUFT News)

By Jocelyn Flores and Alex Sargent

The two campaigns attacked each other for a year and a half, and with both considered as unfavorable candidates by many, some observers were left to wonder whether people would actually vote.

However, as the dust begins to settle from what has been described as “the dirtiest presidential race since ’72,” it is becoming clearer that voter turnout generally increased across the state of Florida as compared to 2012.

About 74 percent of registered voters cast ballots in the 2016 general election, according to a WUFT News analysis of the election results from each of Florida’s 67 county supervisors of elections. In 2012, it was 72 percent, according to the Florida Department of State.

Thirteen of 14 North Central Florida counties — including Alachua, Hernando and Marion, the three largest in the area in terms of population — saw an increase in voter turnout from their 2012 levels, according to the analysis. The only exception was Putnam County, which declined by 1.8 percent.

One talking point since the election has been the role that voters in rural counties played in deciding swing states nationwide. But urban counties still had a marginally higher turnout rate in the Sunshine State.

Rural counties — which the Florida Department of Health defines as having fewer than 100 residents per square mile — had an average turnout rate of 74.3 percent, compared to the 75 percent rate for urban counties.

Rural Union County, which borders Alachua to the north, saw a 2.9 percent increase in voter turnout compared to the 2012. Trump won the county with 80.2 percent of the vote, even though there are 460 more registered Democrats within the county limits.

Deborah Osborne, Union County’s supervisor of elections, said she has never seen so many people be interested in a presidential race in the almost three decades she has been working at the office.

“We’ve had people come in and register to vote for the first time at 50 and 60 years old,” she said.

Osborne said that while she wasn’t sure why voter turnout was higher than it was in 2012, it could have been because Union County residents either didn’t really want Clinton to be elected or that they were impressed by Trump’s campaign and message.

“This presidential race had so much publicity and so much ugliness, bitterness back and forth and all that,” she said. “People really got into it.”

Increased public attention surrounding this year’s presidential race had a role in increasing turnout for North Central Florida and elsewhere in Florida, according to Michael Martinez, a political science professor at the University of Florida.

While some experts were concerned that the perceived unpopularity of the two presidential candidates would decrease the number of people who decided to vote, the opposite appears to be true, he added.

Instead of being discouraged, “voters may have been mobilized by concerns about the other party’s candidate,” Martinez said.

In addition to fears of the opposing candidate, Martinez also highlighted Florida’s status as a swing state as a motivating factor for increased turnout.

Also, mobilization efforts coordinated by each campaign were “extraordinarily good,” he said, even if Democrats were unable to capitalize on their sizable advantages in certain key demographics, including African-American voters.

Martinez said he believes that each campaign’s efforts were an extension of the strategies that helped President Barack Obama win Florida in 2008, demonstrating that focusing on increasing voter turnout in the state is a necessary part of any successful presidential campaign.

Jocelyn is a reporter for WUFT News. She can be reached at news@wuft.org or 352-392-6397.
Previous Protests Continue Over Sabal Trail Pipeline Construction
Next Pearl Harbor: 75 Years Later