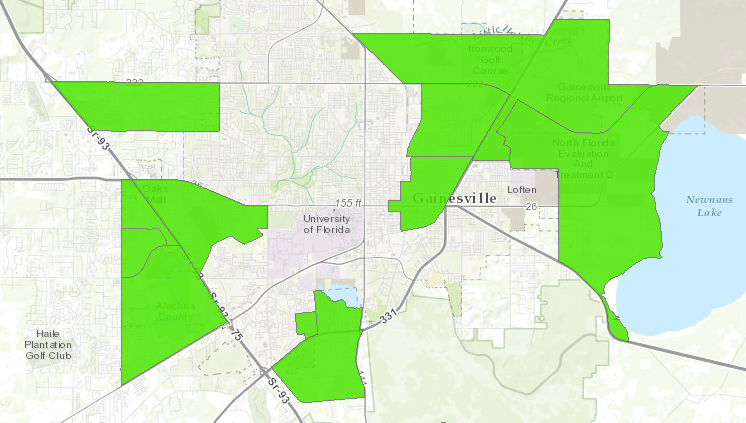 This image, taken of the USDA Food Access Research Atlas, shows the areas of Gainesville that have low income residents with little access to quality food. (Courtesy of USDA.gov)

Alachua County students look forward to winter break almost as soon as the school year starts. From Dec. 17 until Jan. 2, they won’t have to wake up early, do school work or worry about exams.

But for some students and their families, winter break means a two-week period without access to free and reduced-cost lunches.

Alachua County Public Schools is holding a food drive to collect and distribute food boxes to families in need during the holiday break.

Each box of food costs approximately $60 and includes items like mac-and-cheese, instant potatoes and soup.

The food drive ends Friday, and volunteers will prepare boxes of food over the weekend so they can be delivered to schools on Monday.

People wishing to donate food or checks can drop them off at Myra Terwilliger Elementary School, Lawton M. Chiles Elementary School or Abraham Lincoln Middle School. Online donations can be made on The Education Foundation of Alachua County website by designating food basket as their special purpose.

“It is the season of giving, so other people are thinking about how can I help others with their basic needs,” Kostamo said. “Food is an easy way to give.”

After each box is completed, schools distribute them to families, either by having them picked up, or in cases where the family doesn’t have access to a vehicle or is unable to show up in person, by delivering them.

Last year, the drive fed 840 families. This year they are attempting to give at least 800 boxes of food, Kostamo said.

However, one issue this program faces is that the number of families in need often outweighs the amount of food donated. Of the 2013-2014 Alachua County students, 52.9% were eligible to receive either free or reduced cost lunch, according to Florida Kids Count. In some instances, an entire school is on free or reduced-cost lunch. In those cases, schools decide how to distribute food so those most in need receive it.

Large portions of the outskirts of Gainesville are locations known as food deserts, where low income families live a considerable distance from healthy food sources like supermarkets and farmers’ markets. In cases where families don’t have access to a vehicle, some are forced to take long trips to get food — sometimes by foot.

Six hundred and sixty-two families in the Waldo Road area live at least a half mile from a supermarket and don’t have a vehicle, according to USDA statistics.

“The east side of town is some of our biggest free and reduced areas. We do provide a lot of items to those schools,” Kostamo said. “They request more than schools in other places.”

Alachua falls into a category of poverty called persistent poverty, an area that has had at least 20 percent of its population in poverty over the last 30 years, as defined by the USDA. As of the 2010 census, 21.6 percent of Alachua County residents are living in poverty.

The organization works as a supplementary food source for those in need to come in to get three days worth of food, once a month. It also helps supply the local Weekend Hunger Backpack Program and Rural Mobile Outreach Program. These programs bring food, school supplies, personal care items and holiday baskets during this time of year to rural, low-income areas with little transportation.

“When choosing between food and things like notebook paper and pencils, you are going to choose food,” Porter said.

Over the holiday season, Catholic Charities continues to participate in the Backpack program, sending additional food home with the 700 students in 17 Alachua County schools for the long break.

“During the holidays, families especially come under an extra constraint,” Porter said. “Those extra things can throw you into a tailspin. No parent wants to have their child wake up Christmas morning and not have something under their tree.”

Porter said many of the people they help are employed, but during the holidays every dollar counts, especially for those with children.

“They, too, can have the magic of Christmas,” she said. “When you are making $8 an hour, that is not always an easy task.”

Ty is a reporter for WUFT News who may be contacted by calling 352-392-6397 or emailing news @wuft.org
@tyschildts
Previous DACA Students Feel Uncertain About Their Future After Election
Next Department Of Defense Opens Biomedical Countermeasure Facility In Alachua