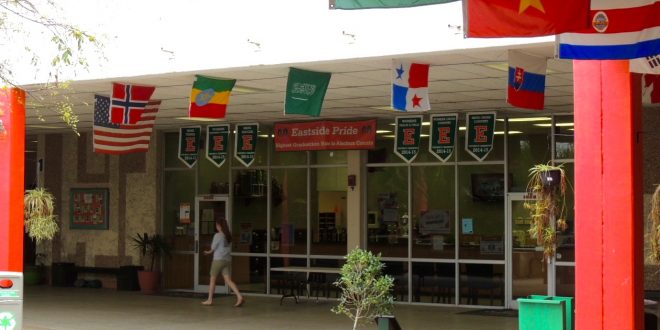 Noting that most students don’t have cars, Crutchfield said their best snack options after lunch are limited to bags of low-fat Cheetos and flavored water.

“There’s nothing that I would call a meal,” the 30-year-old said.

So in early September, Crutchfield began efforts to improve the school’s food offerings.

It was then he spoke to the school’s food and nutrition manager, Amy Keller, about the issue, and the two applied for a program called the Afterschool Meals Program.

Funded by the U.S Department of Agriculture and administered in Florida by the Florida Department of Health, the program provides reimbursement for nutritious meals and snacks served at eligible schools.

Eastside was approved, and when the program starts there on Jan. 3, the school will become Alachua County’s third high school, joining Santa Fe and Newberry, and 27th school overall to partake.

He said athletes stay at the school as late as 9:30 p.m. if there is a game, and an athlete’s nutrition impacts their performance. He said he drew motivation to apply for the program from the athletic food programs colleges typically offer.

“High school athletics is taking the shape more and more of college athletics as far as the time commitment, nutrition and weight training,” Crutchfield said.

For the first few weeks, the meal program will provide only cold meals, such as ham-and-cheese sandwiches, which are easier to transport and don’t require extra staffing. However, Crutchfield said that hot foods, such as stuffed-crust pizza, will be available in following weeks depending on participation.

With the football, track, baseball and basketball teams expected to participate in the program, Crutchfield said it will feed about 150 athletes daily. Meals will also be offered on game days.

“I think the kids will see a difference in their bodies and the way that they’re able to recover from workouts by adding the additional calories,” he said.

Though inspired by student-athletes, the program is planned to extend beyond sports.

All Eastside programs and clubs can partake as long as a roster is provided and there is an educational aspect of the program, said Caron Rowe, marketing and promotion specialist for the Alachua County School Board Food and Nutrition Services.

When such snack and after-school meal programs first began in Alachua County, they were aimed mainly toward elementary schools.

“Once word got out about it, and we knew these sports programs were going on in the high schools, our managers approached them,” Rowe said. “We all work together in deciding if it’s logistically a good school for it to happen at.”

Jessica Gonzalez is a reporter at WUFT News. She can be contacted at 352-392-5551. Her Twitter handle is @JessicaGville.
@JessicaGville
Previous ‘My Mind Is At Ease’: Gainesville Homeless Center Offers Free Yoga
Next 3 More Butler Plaza North Businesses Open Doors