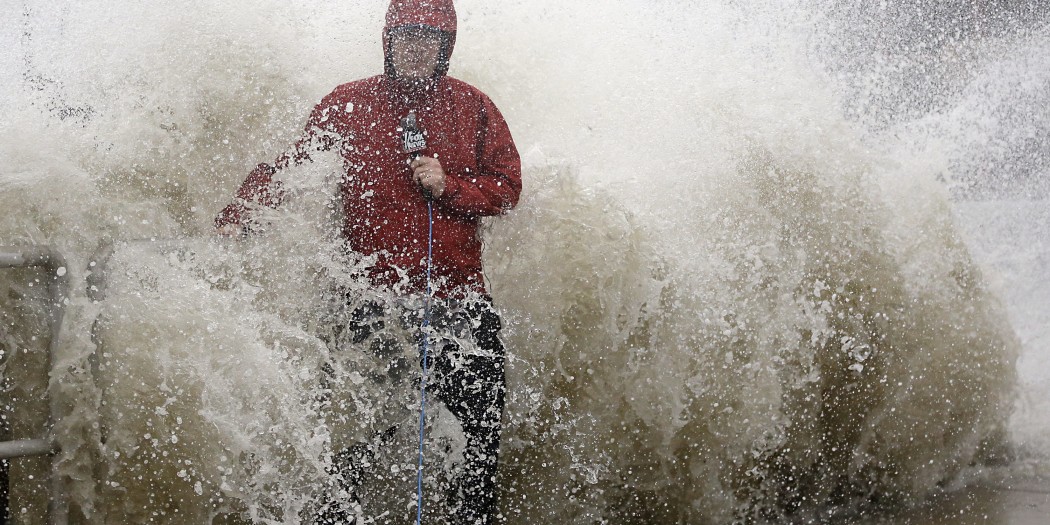 A news reporter doing a stand up near a sea wall in Cedar Key, Fla., is covered by an unexpected wave as Hurricane Hermine nears the Florida coast, Thursday, Sept. 1, 2016. (AP Photo/John Raoux)

Florida ended its 2016 hurricane season Wednesday, marking the first time in more than a decade that the Sunshine State was hit by a hurricane.

When Hurricane Hermine came on shore near St. Marks, a coastal community south of Tallahassee, in the early morning hours of Sept. 2, it ended a record string of 3,966 days, or 10.87 years, without a hurricane making landfall in the state most prone to being hit by tropical storms, according to a new analysis by Colorado State University.

Prior to Hermine, a Category 1 storm, Florida was last hit by Hurricane Wilma, a 120-mph, Category 3 storm, which struck Southwest Florida on Oct. 24, 2005.

Florida also came close this year to a direct hit by a major hurricane, as Hurricane Matthew, which was the first Category 5 storm in the Atlantic basin since 2007, came within 50 miles of Florida’s East Coast, raking the state Oct. 6 and Oct. 7 before making landfall Oct. 8in South Carolina as a 75 mph Category 1 hurricane.

Matthew’s near miss extended the United States’ streak of avoiding a landfall by a major hurricane, defined as a Category 3 storm with winds of 111 mph or higher, for 11 consecutive years, the longest streak based on records dating to 1851, according to Philip Klotzbach, the Colorado State University researcher who wrote the analysis. The last major landfall was with Wilma in 2005.

Although Matthew was a “close call” for Florida, the powerful storm caused extensive damage in coastal counties including Brevard, Volusia, St. Johns, Flagler and Duval. It knocked electrical power out for more than 1 million Florida homes and businesses.

Gov. Rick Scott, who faced his first hurricanes since taking office in 2011, said several lessons were learned from the storms. From Hermine, which plowed through Tallahassee and blacked out 80 percent of the electric power in the state capital, Scott said it underscored the need to better coordinate utility resources to restore power.

From Hurricane Matthew, which forced a number of counties to close schools for several days, Scott said the state “can work better at getting our schools opened faster.”

In terms of storm damage, the 2016 hurricane season fell far short of some of Florida’s worst seasons, including 1992’s Hurricane Andrew, which caused an estimated $24 billion in insured damages in Florida and Louisiana, according to the Insurance Information Institute.

With data reflected through October, the Florida Office of Insurance Regulation said Hermine resulted in $95 million in property-damage claims, with Leon County accounting for about 3,500 of the 18,222 claims.

Updated damage claim reports will be filed in December, according to state insurance regulators.

Citizens Property Insurance, the state-backed insurer, said it has paid out $10.7 million in claims related to Hermine and Matthew, with 84 percent of the 4,000 claims closed.

The impact was relatively light for the insurer, which has more than 472,000 policies representing $128 billion in exposure. But Barry Gilway, the Citizens president and CEO, said the 2016 storm season tested the insurer’s ability to handle hurricane claims.

“We clearly showed that Citizens is ready as we received excellent feedback for our claims handling from our customers,” Gilway said. “That said, we will continue to look for ways to improve.”

In a new analysis of the national property-insurance industry, Fitch Ratings said damage from Matthew, which also impacted other states, including Georgia and South Carolina, is likely to fall at the “low end” of estimates in the range of $2 billion to $8 billion.

The six-month hurricane season was in line with an August estimate from Colorado State University, which had predicted 15 named storms in the Atlantic basin. There were 15 storms, although the three major hurricanes and seven overall hurricanes each exceeded the estimate by one storm each.

The season began with Hurricane Alex, a rare powerful January storm that remained far out in the Atlantic. The season ended with Hurricane Otto, the latest calendar year Atlantic hurricane on record to make landfall. It hit southern Nicaragua as a Category 2 storm last Thursday.

The News Service of Florida is a wire service to which WUFT News subscribes.
Previous Undocumented Immigrant Tuition Issue Re-Emerges
Next Dec. 1, 2016: Afternoon News in 90