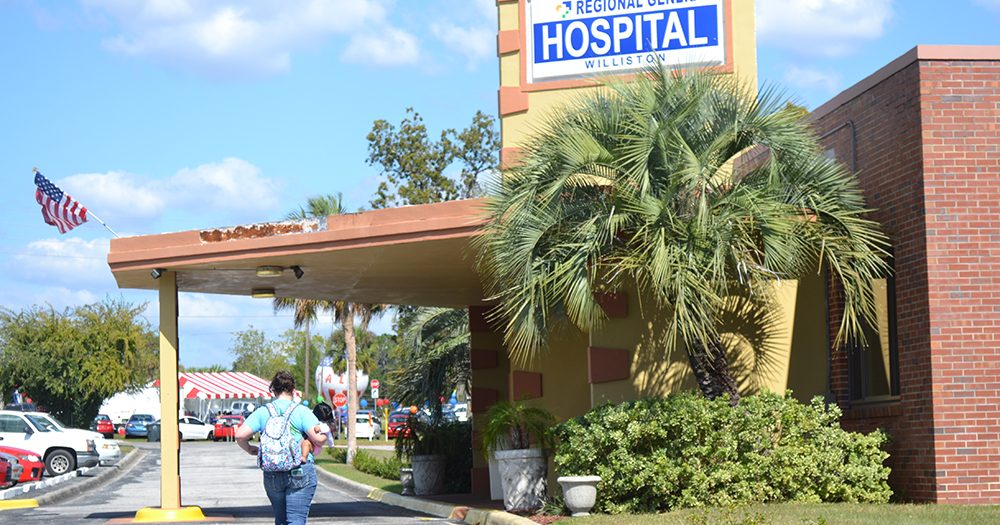 New Ownership Helped To Save Williston’s Only Hospital

Months after Regional General Hospital Williston was on the verge of closing its doors due to a huge debt, the hospital was able to make a comeback with the help of new owners.

LifeBrite Hospital Group is a for-profit hospital management organization that focuses on saving distressed hospitals in rural areas just as they’re about to close.

“We identify which hospitals need our help, and then we come in with a management team,” said Jorge Perez, director of LifeBrite and current owner of the hospital. “We take the risk of investing our money into these hospitals with the hope of turning them around using what I like to call our ‘secret sauce.’”

That secret sauce: a different management style, new business concepts, thinking outside the box, and getting rid of the big executives, Perez said.

Perez, who has saved distressed hospitals for more than 30 years, said about 35 hospitals close every year in the country, and it’s become more than an issue; it’s an epidemic.

“It’s really hard when you’re losing hundreds and thousands of dollars every month, and an employee comes in asking for a raise, or someone says we need new equipment to provide better patient care,” he said. “When you know you’re losing so much money, it stops the hospital from growing.”

In 2015, 7,000 people visited the Williston Emergency Room, but 35 percent of those patients were uninsured or could not afford their medical care, according to JT Lander, vice president of business development for LifeBrite.

Since June, the Human Resources Department has hired a full medical staff to work in the ER, the management bought new technology and state-of-the-art lab equipment for all departments, and the entire hospital was retrofitted with LED lights just to brighten things up and give it a positive feeling, Perez said.

The clinics, which used to be located in trailers outside of the hospital, are now inside, giving the hospital a dual-purpose so patients can get everything done in one visit.

Perez did not wish to disclose how much capital was invested into the hospital.

“We want to be a big city hospital in a small town,” he said. “We want people to say ‘Why do I need to go to Gainesville or Ocala when these guys are just as good?’”

These changes have created a positive work environment within the hospital, too.

Just the Diagnostic Department alone went from having six employees in June to 26 employees in October, and Perez is still looking to hire more people in the months to come, he said.

“Our employees went through a period of not getting paid, to making payroll but fearing the hospital might shut down, to this,” Lander said. “People’s shoulders are relaxed, and they’re happy because they know that next week they’ll still have a job.”

The hospital’s new conditions have also helped with its reputation and success.

Financially, the hospital’s revenue has doubled since August, and it plans to pay off the debt it owes to the city by November, Perez said.

Perez said patients have started taking to Facebook to write excellent reviews about the hospital and their personal experiences. This year, the Florida Hospital Association awarded the hospital an award for being one of the hospitals with the fewest incidents and prioritizing patient safety and care in the state.

LifeBrite also applied for a certificate of need with the Florida Agency for Health Care Administration to open a new hospital about 35 miles away from Williston and north of Chiefland.

The critical access hospital would be a fully functional hospital that carries 25 beds or less.  If the state approves the project in mid- to late December, Perez thinks the hospital will open in six to nine months.

Perez believes hospitals play an integral part in the community, and because people want to live somewhere with good hospitals, it’ll help the community grow.

“I’ve lived here for about 20 years, and I’ve seen firsthand the improvements the hospital has made,” said Raymond Barcinas, a local resident. “I’ve had to take my grandmother to the hospital a couple of times, and with everything they’ve done to fix the place, I trust that they’ll take good care of us.”

Perez said he’s optimistic about the hospital’s future and hopes to make the community proud.

“It’s gratifying for me to come in and see people fighting for a place they know if they’ll lose, they’ll lose everything,” Perez said. “My job is to help patients and build futures, and if I do my job right, this hospital will be here for years to come.”

Elayza is a reporter for WUFT News and can be reached by calling 305-877-5852 or emailing egonzalez14@ufl.edu.
Previous After USB Votes Swing Putnam Sheriff’s Race, Kinney Files Complaint
Next Tying Ties And Building Resumes: UF Students Get Career Tips