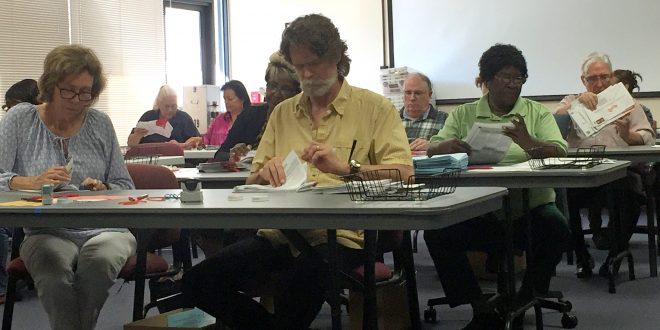 Alachua County Supervisor of Elections staff count and sort ballots during a canvassing meeting on Nov. 1. Thanks to a new Florida law, the several hundred Alachua County voters who would have previously had their ballots not counted because of mismatched signatures had the chance to fix the signatures in the elections earlier this month. (File/WUFT News)

Under a new law, a few North Central Florida residents whose ballots previously would have discarded had them counted in the elections earlier this month.

The law, which comes thanks to a federal judge’s October ruling, says that elections officials are now required to mail affidavits to vote-by-mail voters whose signatures do not match what’s on record with their supervisor of elections. Voters are then given the chance to fix the problem by 5 p.m. the day before the election.

Previously, vote-by-mail ballot signatures that did not match weren’t counted, and the voter was not notified until after the election.

In the 2012 general election, Alachua and Seminole counties were 10 times more likely than Hillsborough, Leon and Sarasota counties to reject a vote-by-mail ballot for signature mismatches, according to court documents involved in the ruling. That year, about 23,000 vote-by-mail ballots were rejected statewide, the documents say.

About a week before Election Day this year, outgoing Alachua County Supervisor of Elections Pam Carpenter said “several hundred” county voters had been flagged for mismatched signatures. But it’s unclear how many corrected the signatures after being mailed affidavits because repeated attempts by WUFT News to reach Carpenter were unsuccessful.

In Marion County, which has 50,000 or so more active registered voters than Alachua County, 65 vote-by-mail ballots were initially rejected for signature mismatches, and those voters were mailed affidavits, Supervisor of Elections Wesley Wilcox said.

Of the 65, 38 didn’t work to correct their signatures, Wilcox said. But the remaining 27 voters did resubmit theirs, and all 27 were approved.

“Usually, they were pretty quick to return the affidavit, within five to seven days,” he said. “As soon as we received an unmatched-signature ballot, we would mail out the affidavit, and they would get it back to us.”

In Putnam County, which has roughly 130,000 fewer voters than Alachua, there were about 30 cases of mismatched signatures, said Charles Overturf, the county’s supervisor of elections. Of the 30, 12 were returned by voters after the affidavits were sent out, and six of those were approved.

The remaining six were denied a second time because “the canvassing board did not feel like the affidavit did anything to help as far as questioning the signature of the ballot,” he said.

To avoid mail-in ballots from being discounted in the future, the Putnam County Supervisor of Elections Office will be sending out new voter-registration applications or asking for updated signatures from all registered voters, Overturf said.

“We’ve got some [voters] that haven’t updated their signatures in 20 or 30 years, and let’s be honest, it all changes as people get older,” he said. “Students of 15 years ago sign totally different now than they did when they were in school.

“That’s why we try to stress over and over again every few years for people to update their signatures: so there won’t be a question about it.”

Carolina is a reporter for WUFT News. She can be reached at news@wuft.org or 352-392-6397.
Previous Gainesville Charities See Increase In Donations During Holiday Months
Next The Latest: Real Madrid, Barcelona Honor Crash Victims

What Is The Purpose Of A Groundwater Recharge Wetland Park? Alachua County’s Planning Agency Just Approved One

The Alachua County Local Planning Agency and Planning Commission on Wednesday voted in favor of a proposed development for a 75-acre groundwater recharge wetland park in the western part of the county.