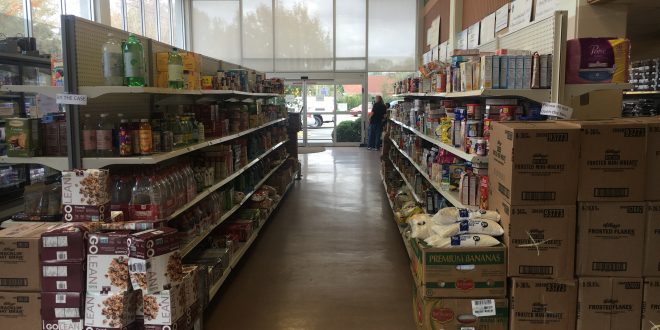 Some Gainesville charities say they are seeing some good charity giving during the holiday months, and for 2016 as a whole, two say they’ve had noticeable spikes as compared to last year.

“The economy has improved in the last couple of years, and unemployment is way down in Alachua County,” said John Barli, regional director at Catholic Charities Gainesville, which provides food, shelter and Christmas gifts to those in need, among other things. “When people are working and they’re having more money in their paycheck, there’s more possibility of giving.”

Increases in donations come as the organization is giving more: During thanksgiving in 2015, the nonprofit gave food to about 364 people, but it had already exceeded that number two days before the holiday this year.

Barli said he doesn’t have any other specific totals, but “we’ve seen an increase in volunteers and donations definitely in the last year.”

This trend of more holiday giving fits in nationally, according to the Blackbaud Index, which notes that there is typically an increase in online and overall giving between the months of November and January.

Climbs in giving around the holidays happen for three reasons, said Jennifer Jones, an assistant professor of nonprofit management and leadership at the University of Florida. They are: tax incentives, nonprofits being more vocal about asking for donations, and simply the fact that giving goes with the holiday months.

But despite holiday giving, “most of the needs exist year-round,” Jones said. “They don’t just exist at the holidays.”

Gainesville food bank Bread of the Mighty, which serves Alachua County and surrounding counties, provided 51,942 meals between Oct. 1 and Dec. 30, 2015, and they were able to purchase 35,301 more through cash donations — a total of more than 87,000 around the 2015 holidays.

Though the nonprofit hasn’t seen as many holiday donations this year when compared with 2015, donations for the year overall are up, said Loretta Griffis, the director of community outreach at Bread of the Mighty.

“People are thankful for what they have, and they want to share with others,” she said.

Bread of the Mighty does a holiday food drive from October through December, Griffis said, but most of the holiday donations come from people walking in and dropping off food.

The food bank typically sees a slight drop in donations after Thanksgiving because the shift toward Christmas becomes more about gift-giving than food, she said.

However, Catholic Charities Gainesville sees a constant increase in donations because the nonprofit offers more than just food, Barli said.

“November is a busier month as far as food donations go,” he said, “but those donations for us switch to toys, gifts and monetary donations as we get toward Christmas.”

Mary Kate is a reporter for WUFT News. She can be reached at mkc1083@ufl.edu or 352-392-6397.
Previous UF To Start Plaza Of The Americas Renovations This Week
Next New Fla. Law Gets A Few More Mail-In Ballots Counted

Betty Gray and her husband worked to bring her idea to fruition at Stirrups ‘n Strides with a mixture of determination and manual labor.