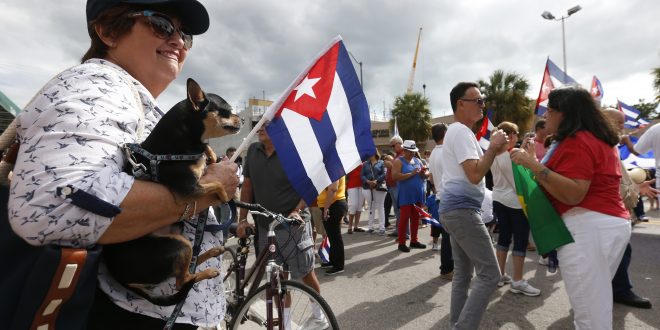 When Castro’s death was announced last year on Sep. 25, 2016, some people had mixed emotions about it. While some celebrated, other people were saying Castro was still a human being. The crowd celebrating in the Little Havana area in Miami on November 26, 2016. (AP Photo/Wilfredo Lee)

Within Days Of Castro’s Death, First Fla.-Cuba Flight Takes Off

MIAMI — Just three days after the death of Fidel Castro, the first regularly scheduled flight in more than half a century left Miami International Airport bound for Havana.

Monday morning’s flight was the first of the new Havana-bound service and the first of four daily flights American Airlines plans out of Miami International. Several airlines began routes to other Cuban cities earlier this year.

The flights are part of the Obama administration’s opening toward Cuba.

The Associated Press is a wire service to which WUFT News subscribes.
Previous Nov. 28, 2016: Morning News In 90
Next Gator Basketball Bounces Back To Defeat Rival Miami