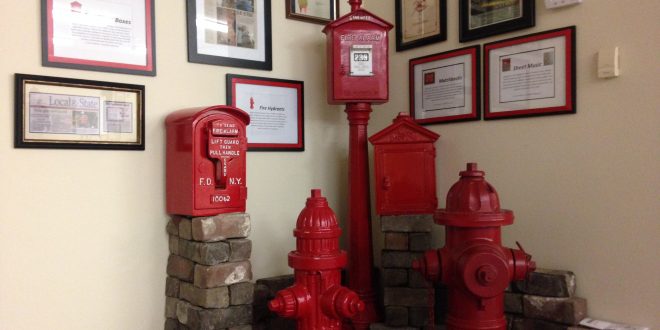 Fire hydrants from different time periods stand atop the brick cornerstone from the Ocala fire station that was built in 1894. A museum presenting these and other items is set to open Monday in Ocala. (Jessica Gonzalez/WUFT News)

Brian Stoothoff first thought of opening a fire museum when he became an Ocala firefighter 32 years ago. One of his first assignments: removing items from a storage area.

There, he found old filing cabinets that contained logbooks and other records dating back to the 1920s.

“That really peaked my interest and at that time,” he said. “I thought, ‘Wow I need to find out more information, and we certainly need to preserve some of this stuff.’”

Stoothoff said he kept some of the items in his garage until he persuaded Ocala Fire Rescue to keep them in storage. Now a retired assistant chief, his plan to save items of historical value are coming to fruition in the form of a new fire museum.

The fire museum, located within the Ocala Fire Rescue administration building on Northeast 21st Street, will have its opening night Monday from 5:30 to 7 p.m.

The museum spans throughout the entire building and serves as a visual timeline of firefighter history: The earliest items are displayed at the front and gradually become more modern.

Olivia Ortiz — a volunteer who helped put the museum together and the wife of the current assistant fire chief, Anthony Ortiz — said her involvement with the museum was unplanned.

“I found out [Stoothoff] had been stashing away all of this great stuff, and I was like, ‘Brian, why isn’t this on display?’” she said.

Shortly after, Stoothoff asked Olivia Ortiz if she would help create displays for the items, which she agreed to and regularly used Pinterest for inspiration.

“We work together really well as a team,” Stoothoff said, “because I have the history and the artifacts, and she has the ability to put it all together.”

Some of the museum’s displays are dedicated to the fire-rescue history in Ocala, such as a piece of brick cornerstone from one of the city’s original fire stations, while other pieces document the history of firefighter practices, such as a life net that was used to help people escape from burning buildings.

While he was assistant fire chief, Stoothoff requested the beam from the Port Authority of New York and New Jersey.

At 131 years old, Ocala Fire Rescue is one of the oldest fire departments in Florida, so Stoothoff said he believes the department should be celebrated.

“It’s just a phenomenal thing for us and Ocala that we get to display now,” he said, noting there are similar museums in Jacksonville and Orlando.

Following opening night, the museum will be open from 8 a.m. to 5 p.m. on weekdays, and maps will be provided for self-guided tours.

Ortiz said she hopes the museum becomes available for school tours and that retirees stop by to share their stories at the museum.

Stoothoff said he hopes to soon get a larger space and showcase more of his collection.

Although Stoothoff provided more than half of the items in the museum from his personal memorabilia, the department provided various fire hydrants from different time periods, including one dating back to 1869.

Ocala Fire Rescue spokeswoman Ashley Lopez said the administration office received about 25 phone calls to reserve spots for opening night within the first day it was announced to the public.

Lopez said the museum is taking RSVPs for opening night and is also accepting donations or loaned items. Those interested should contact Lopez at alopez@ocalafl.org.

Corrections: Because of editing errors, this article originally said Stootoff worked as an Ocala firefighter for 30 years instead of 32, and that removing items from a storage area was his first assignment instead of one of the firsts.

Jessica Gonzalez is a reporter at WUFT News. She can be contacted at 352-392-5551. Her Twitter handle is @JessicaGville.
@JessicaGville
Previous Nov. 22, 2016: Afternoon News In 90
Next Alachua County Emergency Responders Need New Radio System, Officials Say