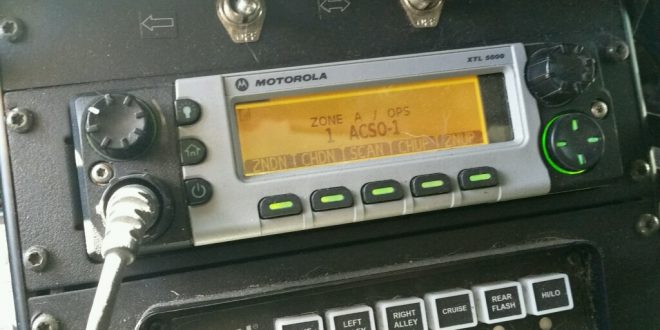 Alachua County officials say emergency responders are in need of upgrades to their radio system. The problem isn't with devices in the vehicles, like the one pictured in a police car, but with handheld devices used on scene. (Photo courtesy Alachua County Sheriff's Office)

Alachua County is considering either upgrading or replacing its current emergency-response radio system for police and firefighters.

The current system is an older Motorola model. Lanier said it either needs to be upgraded or replaced, and the county is looking to hire a consultant to address these issues, which is the next step before any decisions are made.

“What’s our sustainability right now? What are some of the challenges we face? And how do we build and scale this system from a technological, funding coverage perspective?” Lanier said of the unknowns a consultant could help clear up.

A system upgrade would cost between $8 million and $10 million, Lanier said, while a new system would cost more than $10 million.

The problem isn’t with the radio systems in the first responders’ vehicles, he added, but with their handheld communication.

For the best communication, responders must return to their in-vehicle radios rather than being able to use their handheld devices at the scene, he said. Areas where communication is most difficult is in the southeastern and southwestern parts of the county.

The spotty communication is rooted in development that’s popped up over the years, mainly in the construction of taller buildings, which sometimes interfere with radio signals, said Harold Theus, deputy chief for Alachua County Fire Rescue.

“The needs of Alachua County, the population growth and the number of buildings has increased,” Theus said. “It has decreased the amount of radio coverage we’ve been able to have county-wide.”

This has been an on-going issue for the county, and commissioners hope to have it resolved soon, Commissioner Mike Byerly said.

“We need to jointly move forward with this,” he said. “It’s not a new issue.”