By Cecilia Mazanec and Daniel Smithson

Some North Central Florida residents have experienced forms of vandalism and violence following November’s elections. WUFT News is compiling the reported incidents and will update this list if and when more occur.

Swastikas and other messages were spray-painted on a fence in front of the University of Florida’s Delta Tau Delta fraternity house early Nov. 20. There were also reports of a broken window.

Photo of vandalism to @UF chapter of Delta Tau Delta house between Saturday night and Sunday morning before being repainted. @TheAlligator pic.twitter.com/SvsGc7BEIY

As 1,000 anti-Trump protestors marched in front of the house Nov. 19, one fraternity member waved a Trump flag.

#Trump supporters at fraternity house across from University of Florida as #NotMyPresident protestors walk by. #TrumpProtest pic.twitter.com/xmRszC0odl

The anti-Trump event attracted about 1,000 protesters, who marched from the Stephen C. O’Connell Center on UF’s campus to Bo Diddley Plaza in downtown Gainesville to express their dissatisfaction with the election results.

A photo from the earlier scuffle between #Trump and #NotMyPresident protestors during the Freedom From Fear March in #Gainesville. @WUFTNews pic.twitter.com/QEOxGZZ0qt

Someone wrote a racist message on a door in UF’s Beaty Towers dorm on Nov. 17 or 18, but the message has since been painted over.

Fliers reading “Tired of Anti-White Propaganda in college? You aren’t alone” were placed on car windshields on the second floor of the O’Connell Center’s parking garage during the UF’s home football game against South Carolina on Nov. 12.

Swastikas were spray-painted on a Gainesville resident’s yard, house and Trump sign on Oct. 26. At that time, Gainesville police spokesperson Ben Tobias said similar incidents were under investigation. 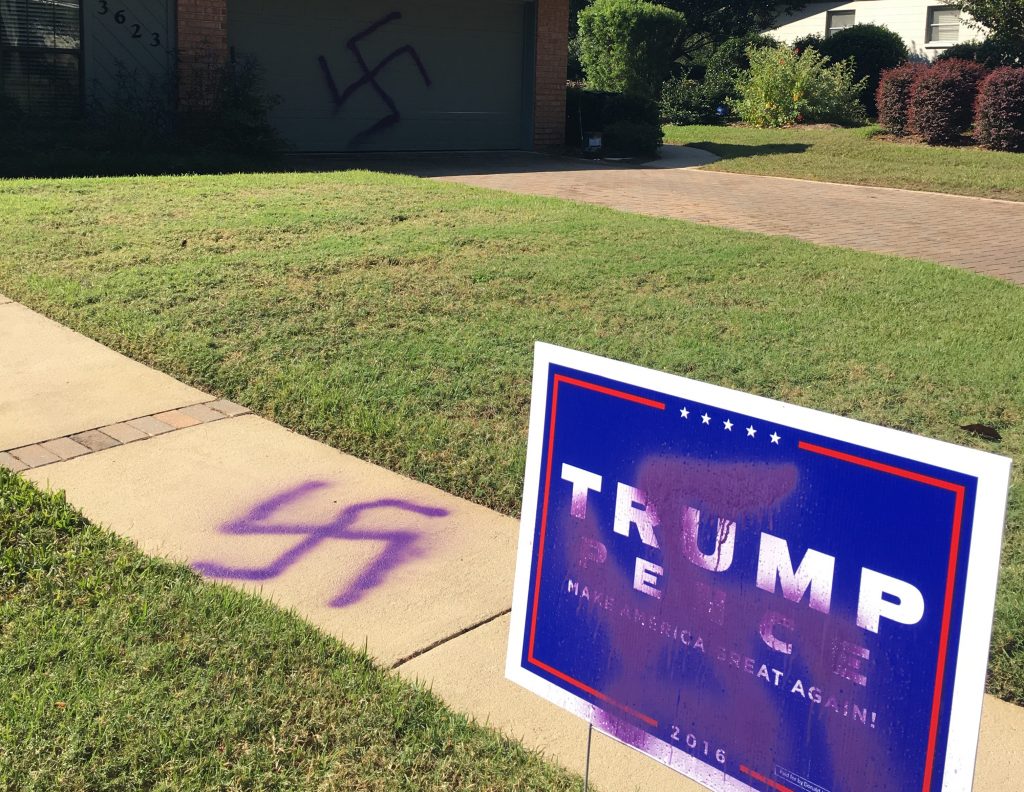 Cecilia is a reporter for WUFT News and can be contacted by emailing mazanecc@ufl.edu.
@@CeciliaMazanec
Previous Nov. 21, 2016: Afternoon News In 90
Next In Photos: Gainesville’s Thornebrook Village Hosts Quilt And Bluegrass Festival