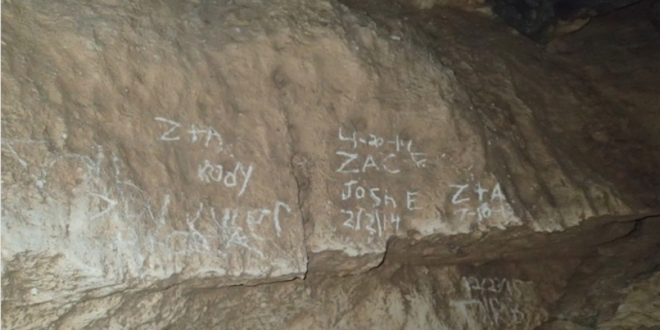 Names drawn inside a cave in Withlacoochee State Forest are part of what officials say has been increased human activity in the caves. To protect two species of bat that depend on the forest's caves, the Florida Fish and Wildlife Conservation Commission has designated six of them as a Critical Wildlife Area, which brings extra protections, including restrictions to human access. (Photo courtesy Florida Fish and Wildlife Conservation Commission)

More than footprints have been left recently in the caves at Withlacoochee State Forest in Central Florida.

Graffiti, garbage and erosion are also being seen in them, said Colleen Werner, a biological scientist for the forest.

Meanwhile, bats that use the caves to raise their young and survive during the winter have been abandoning the area, worrying wildlife officials.

So to protect the bats, Florida Fish and Wildlife Conservation Commission officials designated six Withlacoochee caves in Citrus County last week as one of 13 new Critical Wildlife Areas, or CWAs.

At a meeting Wednesday, the commission approved the new CWAs, which protect areas where animals are concentrated and where they typically breed or roost. The additions bring Florida’s CWA total to 33, said Melissa Tucker, the commission’s assistant section leader for species conservation planning.

The decision — which the commission had been working on since the summer — will result in the six caves being closed off to visitors seasonally. The closures will go from Dec. 15 through March 15 for hibernation and April 15 through Aug. 15 for maternity season, Tucker said.

Other caves in the forest will still be open to the public during the times those six are closed.

The six caves — all in a roughly 3-acre area — are home to two species of bats: the Southeastern myotis and the tricolored bat.

Female Southeastern myotis bats congregate in large colonies to raise their young and are sensitive to human disturbances, Werner said.

“For them to be able to raise their young successfully and not abandon the cave, or possibly the pups, they need to have a refuge,” she said.

“When a bat is woken up by, let’s say, illegal caving activity … they’re using up precious fat reserves that they need to get through the winter,” she said.

Vincent Morris, Withlacoochee’s resource administrator, said adventurous people sometimes enter the caves without a permit, making them difficult to patrol and monitor. But the commission’s new CWA designation will help with enforcing the rules.

“This would provide fencing and signage and a better ability for our law enforcement to be able to cite them for going into the caves illegally,” he said.

Werner said she has no way of knowing how many people are illegally entering the caves, but signs of increased human activity have coincided with bats abandoning the caves.

“We can’t say for sure without a shadow of a doubt if that’s from human activity,” he said, “but it’s very well possible.”

Because there are other caves open to the public for caving and research, Tucker said she doesn’t see any downside to the decision.

“I actually think it’s a great balance,” she said.

Though neither of the affected bat species are endangered, Tucker said she’s still concerned about their well-being.

“Both of them are species that people have some concern about because, at least for the tricolored bat, there’s been declines due to a disease called white-nose syndrome,” she said.

The disease creates fungus that covers the wings of hibernating bats, according to the Florida Fish and Wildlife Conservation Commission’s website. Since the syndrome was found in 2006, it has killed more than 5 million bats, the commission estimates.

The disease is in Georgia, making Florida’s caves a refuge for tricolored bats, Tucker said.

“We don’t know when or if it will come to Florida,” she said, “but we should start to prepare.”

Cecilia is a reporter for WUFT News and can be contacted by emailing mazanecc@ufl.edu.
@@CeciliaMazanec
Previous New Fla. Lawmakers Bring Wealth Drops In House, Senate
Next Eastside High Student To Perform At Army All-American Bowl