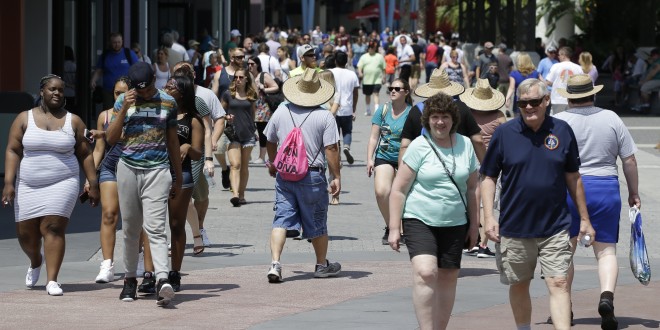 Visitors stroll by shops and restaurants at Disney Springs in Lake Buena Vista in 2016. Despite hurricanes, Zika and the Pulse Nightclub shooting, the state saw a record number of tourists during 2016.(File/AP)

Tourists are visiting Florida in record numbers despite a year that saw two hurricanes hit the state and federal officials warn away pregnant women from Miami due to the Zika virus.

Scott said in a written statement that the record numbers show how well Visit Florida, the state’s tourism marketing arm, is doing its job. Incoming House Speaker Richard Corcoran has questioned continued funding of the organization.

The governor noted that record numbers of tourists visited the state despite the Zika virus outbreak, hurricanes and the tragic attack at the Pulse Nightclub in Orlando that left 49 dead.

The Associated Press is a wire service to which WUFT News subscribes.
Previous Nov. 21, 2016: Morning News in 90
Next 1,000 Anti-Trump Protestors March In Gainesville