By Alex Sargent and Evyn Moon

The freight trains are owned by CSX Transportation, and according to their spokesperson, Laura Phelps, the two CSX trains collided at around 4:15 Wednesday morning outside of the unincorporated community of Citra, Florida.

Each train was over 100 cars long, with one carrying a load of coal south to Tampa, Florida, and the other carrying phosphate rocks north to Chicago, Illinois.

Phelps also stated that the crash damaged one of the train’s diesel fuel tanks, which has an estimated capacity of 4,500 gallons, and that an unknown amount of fuel leaked out of the tank. However, Phelps said that the spill does not currently present any immediate danger to the local community.

“There is no hazardous material danger to any public at this time,” Phelps said. “We’re working onsite with our HAZMAT managers here, and with the Department of Environmental Protection to identify how much fuel has spilled, and develop a containment plan for that.”

Phelps also stated that there were no major injuries reported from the crew of either train as a result of the crash.

Local residents and members of the media were being kept away from the actual wreckage as of Wednesday afternoon as local authorities and CSX employees began the cleanup process.

Most of the specific circumstances surrounding the crash are still under investigation, which Phelps said would likely be a “lengthy” process.

“We’re working to find out what happened, and we’re going to use that information to try to prevent this from happening again,” Phelps said. “All of the details are under investigation and we don’t have a timeline for when we’re going to know conclusively.”

The accident left part of NE 175th St blocked for most of the morning, but normal traffic flow has now resumed in the area. 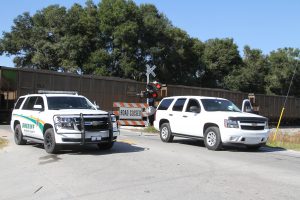 Debbie James, whose house overlooks the railroad, said that this is the first time that there has been an issue on the railroad for the 34 years that she has lived in the area.

“I did hear the train come to a screeching halt. It was early. I don’t even know what time it was,” James said. “And I didn’t think nothing about it, cause it happens often. So I right back to sleep. And I looked out the window and saw that the train was sitting on the tracks.”

But despite the emergency services and HAZMAT teams working less than a half a mile from her house, James says that she’s not worried about the collision.

Alex is a reporter for WUFT News and can be contacted by calling 407-902-8783 or emailing asargent@ufl.edu.
@AlexHSargent
Previous Nov. 15, 2016: Afternoon News In 90
Next UF-Developed Voting Machine For Disabled Used On Election Day