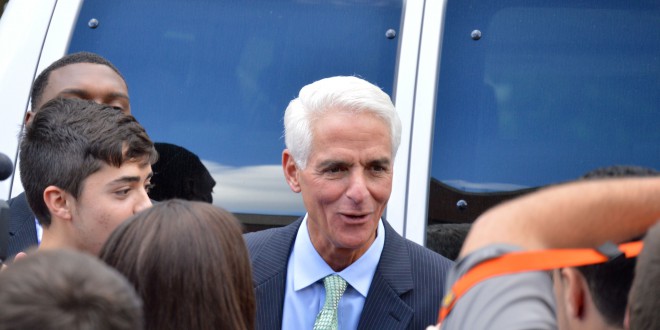 After Election Losses, Fla. Democrats Look For Answers — And A Leader

TALLAHASSEE — After losing the state’s presidential and U.S. Senate races and failing to make major gains in the Legislature, Florida Democrats are groping for a way forward as the 2018 elections loom with battles for governor and all three state Cabinet seats.

The immediate issue is who will lead the Florida Democratic Party and its 4.87 million voters, with the announcement Friday that Allison Tant, who has chaired the party since 2013, is stepping down in January.

Tant, a former Tallahassee lobbyist who was known for her ability to raise money for Democrats, led the party through two difficult election cycles as Democratic presidential candidate Hillary Clinton lost last week in the state and gubernatorial candidate Charlie Crist lost in 2014 to Republican incumbent Rick Scott.

U.S. Sen. Bill Nelson, who could face a challenge from Scott in 2018, defended Tant’s leadership Monday.

Nelson, who is the only Democrat holding a statewide office in Florida, called her “a strong and dedicated leader.”

“I hope the energy she brought to our party will stay with us for years to come,” Nelson said in a statement.

“I think we will hear more names. I don’t think you’ve heard all the names you’re going to hear,” said former state Sen. Steve Geller, who was just elected to the Broward County Commission.

As for the election outcome, Geller said: “When you’re on the losing side, the question is always the same.”

In Clinton’s case, Geller said the Democrats relied too heavily on the Obama “coalition,” which was weaker without the incumbent president on the ticket, and the Democrats were hurt by outside factors, including the FBI reopening an investigation of Clinton-related emails shortly before the election.

Geller said it was too early to speculate on how this year’s defeats, including U.S. Rep. Patrick Murphy’s loss in the U.S. Senate race, will impact the 2018 elections, including the race for governor, a post the Democrats have not won since 1994.

“This week, people are still in shock,” Geller said.

The Florida Democrats will regroup in county-level elections next month, where the 67 party organizations will select county chairs, vice chairs and state committeewomen and committeemen.

Out of that group of local Democratic leaders, the state party will meet sometime in January to select Tant’s replacement, who would serve as the state chair for the next four years, including the 2018 elections as well as the 2020 presidential race.

Clendenin, who was narrowly defeated by Tant in the last party leadership election in 2013, said he is seriously considering running for the party chair again, but has not made a final decision.

“It’s a long road we’re facing,” said Clendenin, who lost a bid for a seat on the Hillsborough County School Board this fall. “And I think everybody in this party is doing some soul searching right now.”

If he runs, Clendenin said he would emphasize the theme he used in his previous leadership bids that the Democrats have to refocus their organization on a “grassroots” approach rather than “top-down driven” effort.

He said that was one of the lessons of this year’s elections, where the Democrats managed to turn out large numbers of voters in major urban areas but were overwhelmed in other areas of the state.

“You can’t possibly get enough votes out of our heavily Democratic areas if we completely ignore two-thirds of the state,” Clendenin said.

Although he was longtime Clinton supporter, Clendenin said he favored the shared approach of Bernie Sanders and Donald Trump who both had “a bottom-driven movement that percolated up from social media and then was implemented into a grassroots movement that was real and in the field.”

With many names circulating as possible party chairs, Clendenin questioned whether some of the candidates will be eligible since they must first be elected as a county precinct committeeman or committeewoman to be eligible for a county leadership post and then the state chair.

Clendenin said it was possible for some of those candidates to maneuver their way into eligibility, but it would likely draw more controversy after the clash between the Sanders campaign and the national Democratic Party in this year’s presidential primary.

“I don’t think they’re going to be able to withstand that type of scrutiny this time around,” he said.

Bullard, who was defeated in his re-election bid last week by state Rep. Frank Artiles, R-Miami, said he is interested in the party leadership position.

Bullard said he would emphasize “a recommitment to our grassroots political ideology, putting everyday working families before special interests.”

“People want to know there is a party out there working for them and that it represents their voices,” Bullard said, pointing to issues like protecting Social Security, raising the minimum wage and protecting individual rights “regardless of sexual orientation.”

Bullard said Trump was more successful with voters based on a campaign strategy of “fear.”

“I would say the antithesis of that would be an atmosphere of positivity,” Bullard said, saying the party needs a message that appeals across the racial and economic spectrums.

The News Service of Florida is a wire service to which WUFT News subscribes.
Previous To ‘Strike Out Hunger,’ Groups Organize Alachua County Food Drive
Next Gainesville ‘Open To All,’ Mayor Says After Elections