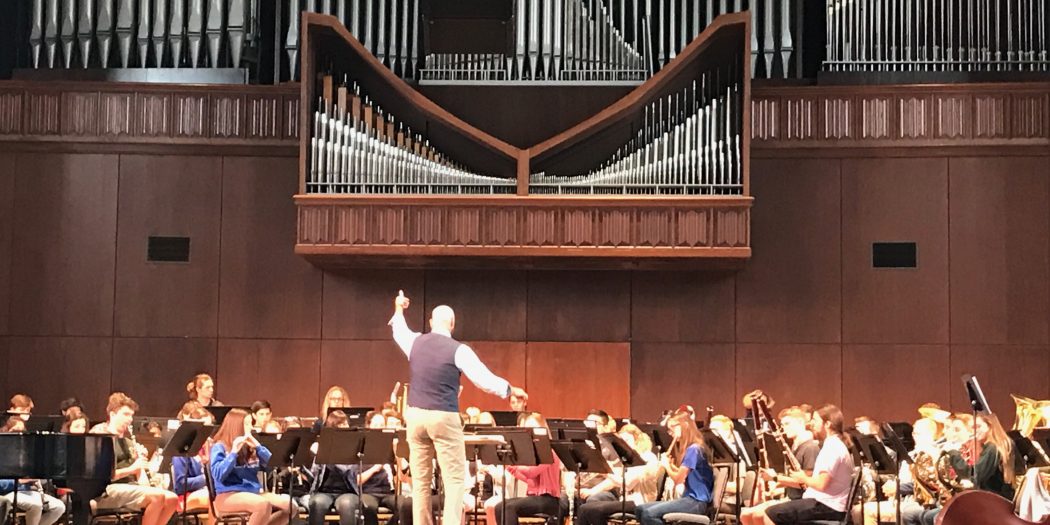 The University Of Florida Wind Symphony Hosts A Concert In Gainesville

The University of Florida Wind Symphony will host a concert tonight featuring a guest conductor from Vienna as well as a piece honoring all military veterans.

The concert – Old World : New World – starts at 7:30 p.m. in University Auditorium and is free and open to the public.

Andrew Bajorek, a euphonium player with the Wind Symphony and a doctoral teaching assistant with the bands and the music education degree program, said the concert is not part of an annual homage to veterans but will feature Morton Gould’s “Marches” from Symphony for Band, West Point.

“We’ve honored veterans in the past at various concerts,” he said. “This one, being close to Veterans Day, seemed an appropriate venue to honor military veterans.”

David Waybright, the director of bands and a trumpet player, said the concept of the concert is the collision and collaboration of the old and new worlds of music.

Waybright said the UF School of Music is trying to form a relationship with the Wagner Conservatory in Vienna and is facilitating exchanges, which brought guest conductor Christian Schulz to UF.

Although it is Schulz’s first time conducting a band instead of an orchestra –there’s no strings section in a band– he said he’s looking forward to the experience.

Instead of strings, he said, “I have a piccolo next to me.” “It’s a nice shock.”

Schulz, a native of Vienna, started as a cellist. Schulz has over 20 years experience as a member of the Vienna Symphony, two years experience being the managing director of the Vienna Symphony, composes music and has conducted for over 20 years for different orchestras, festivals and chambers in Vienna. He’s also guest conducted in other countries including Japan and the United States.

He said he began his conducting career as a fill-in for another conductor.

“I started because a conductor got sick,” he said.

He said he started conducting first and then studied to be a conductor, an approach he referred to as “learning by doing.”

He said he thinks the concept of the old and new worlds of music colliding is appropriate because many famous conductors from Europe used to do tours in America.

“It fits perfectly,” he said.

There will be a pre-concert lecture at 6:45 p.m. in the Friends of Music room. More information can be found at ufbands.com or by contacting mpearce@arts.ufl.edu or 352-273-3146.

Nicole Kocian is a reporter for WUFT news. She can be reached at 352-262-9272, or follow her at @nicole_kocian on Twitter.
@@nicole_kocian
Previous Medical Marijuana Legalized in Florida
Next Oct. 27, 2016: Afternoon News in 90

The Show Must Go On: Gainesville’s Hippodrome Theatre Prepares For ‘Hybrid Season’