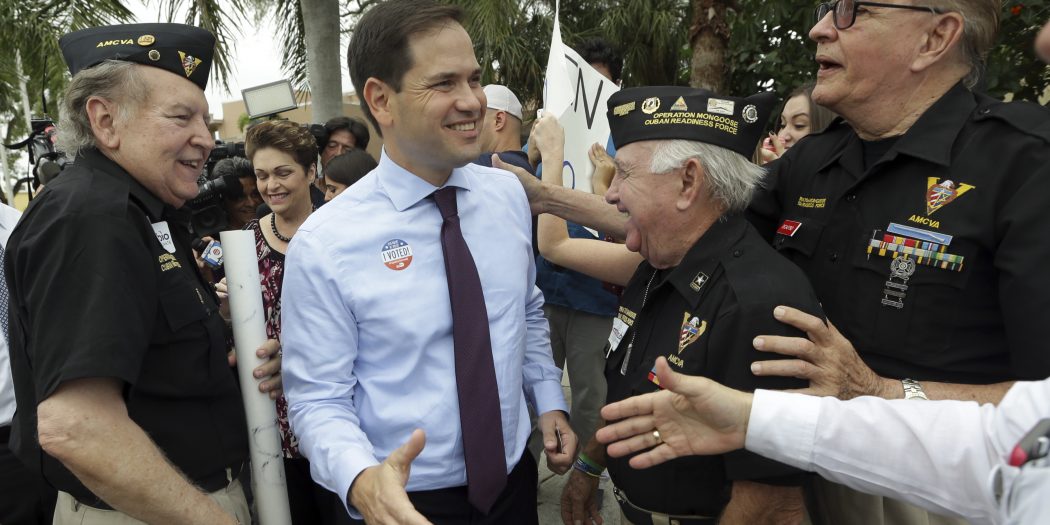 Florida voters were deciding Tuesday whether Republican Sen. Marco Rubio deserves a second term in an election that also will send at least eight new members to Congress, play a critical role in the presidential race and decide whether to broaden access to medical marijuana.

Rubio is being challenged by Democratic U.S. Rep. Patrick Murphy, a second-term congressmen who has repeatedly attacked Rubio for missing votes while running for president and supporting Republican presidential nominee Donald Trump despite condemning his words and behavior.

The race has been surprisingly tight. Republican leaders strongly urged Rubio to seek a second term after Rubio, by his own count, said 10,000 times he wouldn’t. He was seen as a lock to retain the seat as the major parties struggled for a Senate majority, but Murphy has remained competitive, despite being largely unknown to voters. Millions of dollars has been spent in attack ads claiming he lied about his education and professional experience.

Murphy’s rise could be a sign that some Florida voters lost their love for Rubio after he ran for president and that Rubio is being dragged down by Trump, a candidate who has turned off voters with comments about women and minorities and unsubstantiated claims that the election was rigged in favor of Democratic nominee Hillary Clinton.

For 74-year-old Republican Sharon Van Wart of Pinellas Park, the overall tone of the Senate race was a turnoff. She didn’t vote for Rubio or Murphy.

“I’m not sure I like either one of them,” said the retired social worker, who cast a vote for Trump in the presidential race. “Just from the ads, the issues weren’t talked about, but the name calling was.”

Florida is the largest swing state, with 29 electoral votes, and there’s little chance Trump can win the presidency without it. That’s why Trump and Clinton spent a ton of time in Florida during the final weeks of the campaign. And when they weren’t here, their running mates, President Barack Obama, first lady Michelle Obama or Vice President Joe Biden were. Polls have shown a close race.

Florida has nearly 12.9 million voters. They break down like this: nearly 4.9 million Democrats, nearly 4.6 million Republicans and more than 3.4 million voters not registered with either major party.

Heading into Election Day, a record number of Floridians voted early. Republicans had already cast 2.5 million ballots by mail or at early-voting sites, compared with 2.59 million by Democrats. That means independents, who cast 1.25 million early votes, will have a strong sway in the election.

“This was a long campaign season, a divisive campaign season. It felt incredible to finally get voting out of the way,” said Republican law student Michael Beato, 22, who voted early in the Gainesville area. “I’m happy that I voted on the issues that matter, on the constitutional amendments. Happy that I voted for my senator, Marco Rubio.”

He declined, however, to say whom he chose for president. He said he found Clinton deeply flawed but said the possibility of the country’s first woman president is “a sign of how far things have come in this country.”

In South Florida, Democrat Gary Ansley, a 66-year-old contractor from Wilton Manors, said he voted for Murphy because Rubio has shown he doesn’t want to be a senator, just president, and wants to privatize or cut many social programs.

“He has voted against the people, not for the people,” said Ansley, who also cast a vote for Trump.

Florida voters will also decide whether to amend the state constitution to legalize medical marijuana, which would broaden access to pot beyond the limited therapeutic uses approved by the legislature two years ago. The ballot question needs 60 percent support to pass. Two years ago a similar measure received only 57.6 percent support.

The Associated Press is a wire service to which WUFT News subscribes.
Previous 5 Exit Poll Numbers To Watch On Election Night
Next At The Polls, Perry, Smith Campaigning Until The Last