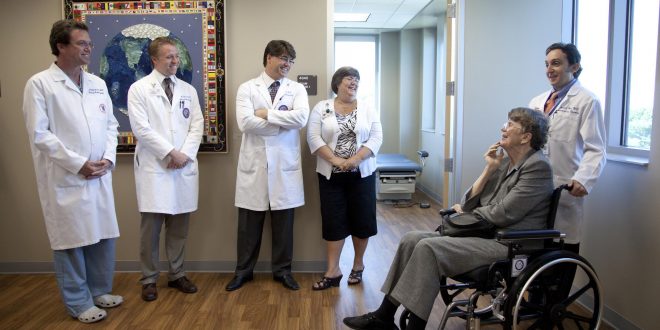 The first woman to serve as U.S. attorney general, Janet Reno, gets a tour of the University of Florida's Center for Movement Disorders and Neurorestoration at the grand opening of its new facility in 2011. Reno, who had Parkinson's, “brought up the spirits of a lot of Parkinson’s patients around the world,” said center co-director Dr. Michael Okun (far right). “I can tell you that she never regretted her life.” (Photo courtesy UF Health)

‘End Of An Era’: Reno’s Gainesville Connections Reflect On Her Life

The first woman to serve as U.S. attorney general, Janet Reno, who died Monday at 78, had ties to Gainesville through her work in law and with Parkinson’s disease.

“She was always positive, no matter what challenges she had in her life,” said Dr. Michael Okun, chairman of the University of Florida’s Department of Neurology and national medical director of the National Parkinson Foundation.

Reno — who once ran for governor in Florida and who had Parkinson’s — was the first patient to ever be seen at UF’s Center for Movement Disorders and Neurorestoration when the facility moved to a new space in 2011, said Okun, who serves as the center’s administrative director and co-director.

The center provides several different types of caretaking for people with Parkinson’s and other movement disorders. Okun said that since Reno was diagnosed with Parkinson’s 20 years ago, the center has seen improvements in care and patients living longer.

Reno “brought up the spirits of a lot of Parkinson’s patients around the world,” he said.

Another Gainesville connection Reno maintained was with Jon Mills, a professor and dean emeritus in UF’s Levin College of Law.

Mills said he knew Reno for 30 to 40 years, ever since she was a state attorney in Miami.

“She’s a remarkably brilliant person but also very human,” he said. “She’s a profile for what we hope people in public service would be.”

One of the things Mills said he admired most about Reno was her humble and simple nature. He said he was sad when he found out Reno had died from Parkinson’s complications.

“That’s an end of an era for someone who is quite a leader for many,” he said. “She’ll be remembered and respected.”

“She wanted to make sure that everyone had a voice, especially children and victims,” he said. “She was a person that lead by her values and principles.”

Ferrer, who worked with Reno for five and a half years, from 1995 to 2000, said he believes she inspired hundreds of thousands of people.

“I admire people who don’t take the easy way out,” he said. “She exemplified that every day.”

Okun said that although Reno has died, she lived a great life.

“I can tell you that she never regretted her life,” he said.

This story has been updated to reflect when Reno actually visited the Center for Movement Disorders and Neurorestoration’s new facility and to include comments from Ferrer.