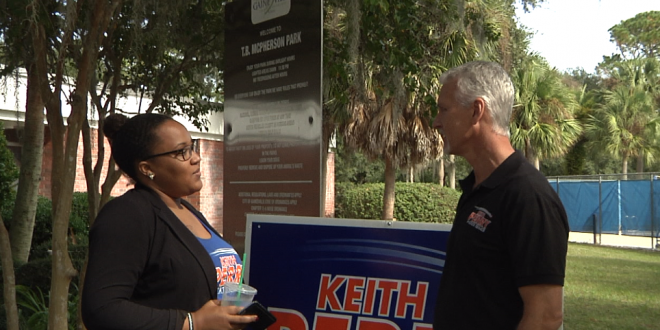 Keith Perry (right) talks with a supporter today at the McPherson Recreation Center precinct on Southeast 15th Street in Gainesville. His race against Rod Smith for the state Senate District 8 seat has been an intense one, with both candidates raising more than $700,000. (Alexa Lightle/WUFT News)

At The Polls, Perry, Smith Campaigning Until The Last

“From 7 a.m. to 7 p.m., I’ll be here for 12 hours,” Perry said today at the McPherson Recreation Center precinct on Southeast 15th Street in Gainesville.

Perry stood as close to the precinct as legally possible, right behind its “No Soliciting” sign. He shook hands with voters, even some wearing Rod Smith shirts.

“I did have one lady who was not sure [who to vote for], and we were able to talk and answer some questions,” he said. “And I thought it was great. … She was smiling and gave me the thumbs up, so I assume our conversation went pretty well.”

Smith, who is hopping among precincts, held his campaign sign outside McPherson and waved to cars passing by. People honked in support.

“You got my vote!” one passerby shouted as she slowed down to wave to Smith.

But Smith doesn’t see precinct campaigning on Election Day as a way to grab last-minute votes.

“I don’t think we’ve changed minds today,” he said. “I think this is the way candidates occupy their minds the last day of a campaign.”

Perry described the District 8 contest as “the most expensive local race of all time, I’m sure.”

Both candidates said they are ready for election season to be over.

The parties are open to the public.

Leah is a reporter who can be contacted by calling 352-392-6397 or emailing news@wuft.org.
@@shieldsleah
Previous Florida To Decide Rubio’s Fate, Influence Presidential Race
Next 7 Scenarios For How Election Night Might Play Out