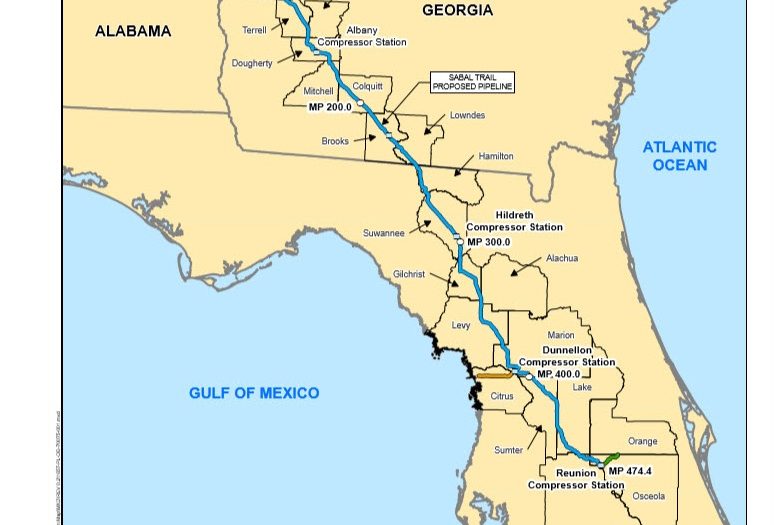 A Facebook event has many Florida residents preparing to use their First Amendment right to protest the Sabal Trail pipeline.

Cindy Noel, whose property is being used for the encampment, said, “It’s nice to know that people are angry. We have to get people together and effect change.”

The Sabal Trail Project is a $3 billion project spanning 515-miles, which will run a pipeline through Alabama, Georgia and Florida in order to transport natural gas. Duke Energy and Florida Power and Light and others will use these resources to run plants that generate electricity for their customers, according to Andrea Grover, a Sabal Trail spokeswoman.

Grover said the natural gas traveling in the pipe would stay in a gaseous form with the help of five compression stations along the pipeline. So, if there were a leak, the natural gas would not contaminate the aquifers. Instead, the gas, being lighter than water and air, would dissolve into the atmosphere.

University of Florida environmental engineering sciences professor Mike Annable, Ph.D., backs up Grover’s statements. However, he said, since it is a gas, any spark on the surface could ignite a fire.

Grover isn’t worried too much about leaks, as the pipeline has many fail-safes. She said people would be watching for pressure changes, temperature changes and the system. If there are any anomalies, the pipeline can be shut with remote control valves and lock down the area that is leaking to isolate it for repairs.

“We want to operate our pipeline safely,” Grover said.

But those opposed to the construction of the pipeline don’t trust that the company executives are telling the full story.

“What if they decided to abandon it and repurpose the pipeline for something else, like crude oil?” asked Noel, one of the creators of the Facebook event. “What are these companies going to do when it’s time to clean up?”

Noel is not alone in her convictions.

Merrillee Malwitz-Jipson, campaign organizer for Sierra Club, even questioned why the pipeline was being built when active compression gas pipelines have not met their full capacity yet.

“It’s a horrible place for the Florida wetlands to be,” said Malwitz-Jipson, another creator of the Facebook event.

Grover said the Sabal Trail Project has taken three years to address environmental impacts of construction and paid geologists to map out a safe pathway for pipeline construction. About 70 percent of the pipeline parallels existing pipelines.

This doesn’t ease Malwitz-Jipson’s mind. She says most of those areas are karst regions, meaning the soil is corrosive and is susceptible to sinkholes and fissures.

Even Sabal Trail acknowledges that some regions they will go through are karst. According to Grover, most of the karst land already has highways, railroads and cities built upon it. Even if a sinkhole did appear, the pipeline can safely span a distance of about 100 ft.

Malwitz-Jipson said she read the environmental reports that came out of the Sabal Trail project. She said there are more than 3,000 entries of karst conditions along the path of the pipeline. On top of that, the Federal Energy Regulatory Commission and the U.S. Army Corps of Engineers did not do any third party testing, she said.

“This [report] was paid for and developed by the company constructing this [pipeline],” Malwitz-Jipson said.

Yet, the Federal Energy Regulatory Commission (FERC), an agency that regulates U.S. interstate natural gas pipeline projects, signed off on permits to allow the Sabal Trail Project to start construction on February 2, 2016.

Florida Department of Environmental Protection also authorized permits necessary for the construction of the pipeline in Florida.

Dee Ann Miller, spokeswoman for the DEP, said “The department met with Sabal Trail multiple times, and numerous changes were made to adjust the pipeline route […] to ensure water quality and avoid potential spring impacts.”

The Sierra Club, which Malwitz-Jipson is a member of, along with Flint Riverkeeper and Chattahoochee Riverkeeper have filed an emergency motion for stay against the Federal Energy Regulatory Commission.

Lawyer for the plaintiffs, Steven D. Caley said, “We have, on behalf of Sierra Club, filed motion for stay, which is to stop construction [on the pipeline] until the court can decide the matter on the case.”

Next Thursday, both parties will file briefs with the District of Columbia Circuit Court of Appeals. Caley also filed an Emergency Motion for Expedited Consideration on October 24, 2016, to speed up the court’s decision process.

“Usually, it will take a year or more on a decision,” Caley said. “ The pipeline will be completed by then.”

The lawsuit asks for a stay on the grounds of merit, irreversible injury to Florida’s ecosystem and public interest.

The section about Florida’s natural ecosystem says that “The Project would cross and impact 1,958 wetland systems and 699 water bodies. Trees and vegetation would be removed, impacting 877.7 acres of wetlands.”

“I took this case because I think if this pipeline is built it’s going to be part of a series of precedents in this country that tie us to outdated fossil fuels,” Caley said.

Noel, who is opening her home for people to protest the pipeline, agrees.

“We just need help,” Noel said, “and anyone who is feeling that passion should come out and help.”

Danielle is a reporter for WUFT News and can be contacted by calling 352-392-6397 or emailing news@wuft.org.
Previous Two Boaters Hospitalized For Injuries In Black Creek Boating Accident
Next What To Know Before You Go To Vote