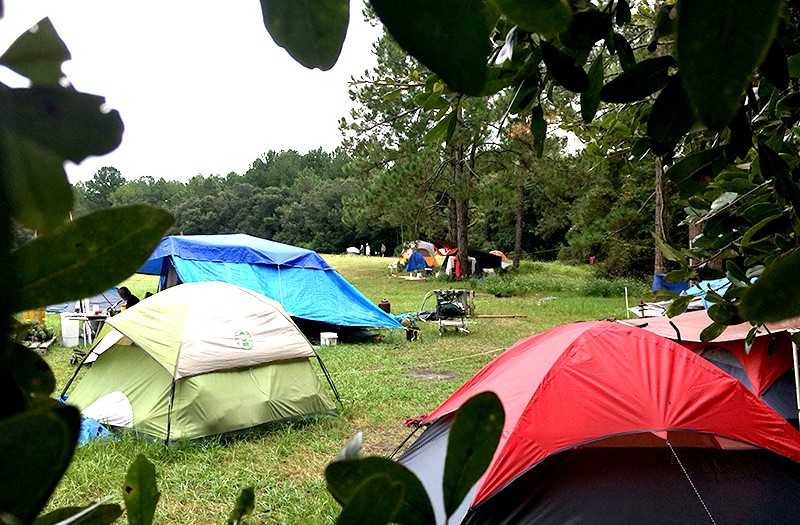 Tents at the Dignity Village homeless camp in 2014. Anthony D. Davis, who is accused of attacking a fellow resident at the camp in 2016, entered a plea of no contest in court today and will serve 12 years in prison, with credit for the year-plus he has already served. (File/WUFT News)

Dignity Village Will Close In Time, The Right Way

Walter Bissette is very proud of his handmade porch.

He may not have a permanent home to put the porch in front of, but he has used any wooden pallets, boards, and plywood that he can find himself or get from friends to construct a small platform in front of one of his three tents at Dignity Village, an informal homeless shelter in northeast Gainesville.

Bissette has lived at the same site for the past year. But over the coming months, he will likely have to either find a new place to set up camp, or move into the Grace Marketplace homeless shelter, which is right across the street from his current site.

Over the past two days, officials from the city of Gainesville and Alachua County have met to work towards implementing their goal of closing Dignity Village in the near future.

The Empowerment Center Oversight Advisory Board, which oversees Dignity Village and the homeless shelter at Grace Marketplace, met Wednesday afternoon to discuss plans surrounding the future of Dignity Village, including a proposal to close and repurpose the area as low-cost housing for the area’s homeless residents.

“Dignity Village will be closed,” said Alachua County Commissioner Robert “Hutch” Hutchinson, adding that “we’re not going to be closing Grace Marketplace or Dignity Village within weeks or months. We are going to take our time and do it right.”

Both Hutchinson and residents of Dignity Village acknowledged that the issues of rampant substance abuse and untreated mental illness present sizeable threats to the community, and have to be addressed.

“Dignity Village is essentially self-governed,” Hutchinson said. “On the one hand, there’s a lot of people who come together and help each other. But on the other hand, in any population there are dysfunctional people who have substance abuse problems or mental illness that’s being untreated.”

Hutchinson stated that the only way to get help to the people who need it would be to ensure that they have stable, permanent housing.

However, residents of Dignity Village expressed concerns about how the implementation of the OrgCode plan would affect them.

One resident, who asked not to be identified by name, said that she was concerned about where she would be forced to live during the planned changes.

“They’ve already shut down a different homeless camp, from what I understand, here in Alachua County,” she said. “Where do they expect us to go?”

“Everybody seems to think, ‘Oh, well they’re just camping out,’” she continued. “No. This is our life. We do this every day, day after day. And this is all we have.”

During the transition, Hutchinson said, as many of the residents of Dignity Village as possible would be moved to Grace Marketplace temporarily. However, he also said that the goal would be to make Grace Marketplace a more temporary facility that would be used to house people while the city searches for more permanent housing options.

“The right solution is for people who are struggling with finding affordable housing to be dispersed in the community in ways that don’t impact anybody negatively,” Hutchinson said. “If people aren’t camping in Dignity Village, there are a number of other camps around the city. So really at some point it almost becomes a definitional issue.”

Some residents are concerned about the limitations that come along with living at Grace Marketplace, including time-restricted access to the building, enforced curfews and limited co-habitation.

“Some people would say that they feel safe inside there, because they’re behind closed doors, Bissette said. “I mean, yes, I understand that. But I’m more comfortable with having my own space, and not somebody breathing down my neck and wondering what I’m doing all day. I want my privacy.”

“It feels like prison inside those fences,” he said. “I’ve been incarcerated before, and that’s bringing back just terrible thoughts that I had back then.”

Bissette said that while he has plans to leave Dignity Village soon, which include starting his own business and re-establishing contact with his two sons, the board’s plan to close the camp won’t help him achieve that goal.

Pamela Davis, a Gainesville resident and executive director of the Gainesville Housing Authority is also on the committee.

Alex is a reporter for WUFT News and can be contacted by calling 407-902-8783 or emailing asargent@ufl.edu.
@AlexHSargent
Previous What To Know Before You Go To Vote
Next Nov. 3, 2016: Morning News In 90