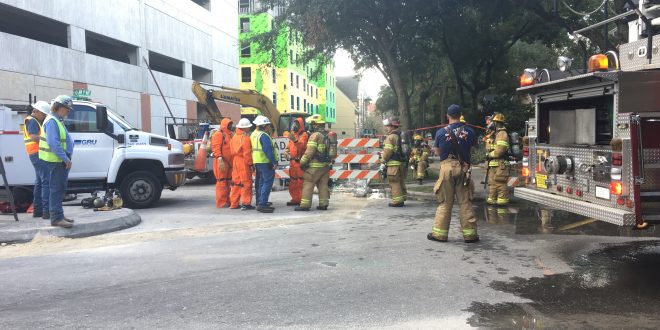 Emergency responders stand at the site of today's gas leak near the University of Florida. The pipe was repaired by 2:30 p.m. (Amalie Batchelder/WUFT News)

By Amalie Batchelder and Gabriela DeAlmeida

Construction workers at The Standard, the towering apartment complex being built next to the University of Florida, and surrounding houses were evacuated for three or so hours today after a GRU-owned underground gas pipe ruptured and sent gas into the air.

The pipe opened up about 11 a.m., and GRU had it fixed by 2:30 p.m. The evacuations were then lifted, said Mike Cowart, operations supervisor for Gainesville Fire Rescue.

GRU representatives couldn’t immediately be reached, so it was unclear what caused the leak.

At first, firefighters were having a hard time fixing the pipeline — which runs under Northwest 14th Street and The Standard — because they didn’t know the location of the valve to shut it off, construction manager Charles Payte said.

Gas could be smelled in a large area around The Standard, prompting officials to close adjacent roads and evacuate homes and the Hare Krishna temple on Northwest 14th Street as a safety precaution.

3 houses across the street were evacuated, the middle house was the only one that didn't have anyone inside @WUFTNews pic.twitter.com/J4ojEWL83w

Construction worker Nick Klein was in The Standard when the leak started.

“I was up there on the eighth floor drilling out some concrete, and one of our workers came running across saying that there was a leak up there, a gas leak,” he said. “So we all gathered as one and come down the stairs, and they told us to evacuate.”

Workers said that they evacuated the building over 20 minutes ago and are still waiting. @WUFTNews pic.twitter.com/e6Cgmunufc

Bada Hari, a member of Hare Krishna temple, typically spends his weekday afternoons serving lunch to UF students at the temple, but because of the gas leak, he had to redirect them to the other lunch site — known as “Krishna lunch” — on UF’s campus.

“I didn’t see [the gas leak start], but I stood on the area over near where they were working,” Hari said. “I could see the men and the gas pouring in. You could smell it.”

Amalie Batchelder is a reporter for WUFT news, and can be reached at 352-392-6397 or amalie.batchelder@gmail.com.
Previous Nov. 1, 2016: Afternoon News in 90
Next Voters Get Second Chance On Mismatched Signatures