Florida’s 2nd Congressional District has changed. Due to the results of the controversial and lengthy redistricting process, this once up-for-grabs seat in the U.S. House of Representatives is now presumed to be safely in Republican hands.

The newly drawn North Florida district is the largest by land mass in the state. It is a considerable swath of the Florida Panhandle, consisting of all or part of 19 counties. 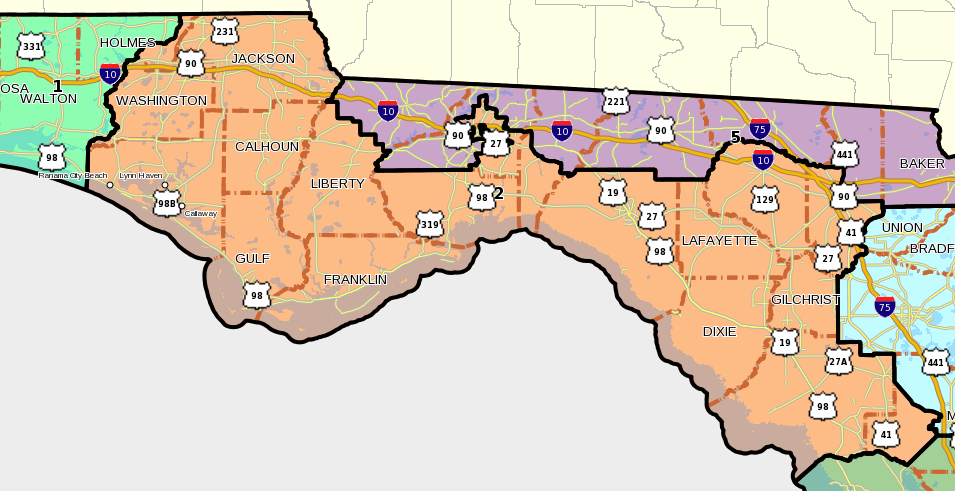 Gwen Graham, the district’s current representative and daughter of former U.S. Senator and Florida Governor Bob Graham, opted to not run for re-election. She is instead considering a gubernatorial campaign of her own in 2018.

Panama City surgeon and businessman Neal Dunn managed to narrowly defeat hard-line Tallahassee attorney Mary Thomas in the Republican primary. Thomas attempted to paint Dunn as an out-of-touch millionaire who has previously engaged in lobbying and donated to Democratic candidates. The campaign was marked by a series of patriotic advertisements in which the candidates proclaimed their conservative bona fides.

Also running is Libertarian Party candidate Rob Lapham, the only Libertarian running for a House seat in one of Florida’s 27 congressional districts.

The 2nd District is rural and largely conservative. Neal Dunn is poised to cruise to a smooth victory by means of his demographic and financial advantages over Dartland and Lapham.

Dunn served in the Army for 10 years before setting up his urology practice in Panama City. He is also a prominent business figure in North Florida, where he opened up a community bank in 2008.

As a Republican, Dunn is a fiscal conservative who believes that government needs to get its nose out of the free market. This involves changes in regulatory and tax policies.

“Everybody thinks there’s too much over-regulation, we all know it’s true,” Dunn said. “We need to lighten the tax burden.”

According to Dunn, these objectives, if accomplished, should revitalize District 2 and the nation at large.

“If we do that, if we turn loose the private sector, they will make the economy grow,” Dunn said.

When asked about the influence of money in politics and the donations he’s made to federal and state candidates over the years, Dunn stood by his past activities.

“You donate to support the candidates you believe in at the time, and certainly a couple of those candidates changed later on, pretty embarrassing, but I won’t say any names,” Dunn said, joking about his contribution to former Governor and Republican-turned-Democrat Charlie Crist. “The vast majority of people I’ve supported, I still support today.”

Dunn is a firm proponent of the effort to repeal and replace the Affordable Care Act, also known as Obamacare, and replace it with House Speaker Paul Ryan’s healthcare plan. Citing his experience as a physician, Dunn sees Obamacare as ineffective, costly and overly bureaucratic.

Dunn is a longtime member of the National Rifle Association and is against any form of gun control, including any type of background checking. He also would work to scrap the federal Common Core education standards, fight against the minimum wage and advocate for building up America’s military capabilities.

Dunn has endorsed and donated to Donald Trump’s campaign for president.

Walter Dartland, the Democratic candidate, admits that he faces an uphill battle but is unfazed by those who say he can’t win the election. It was after learning that no one from the party was running for the seat that Dartland was inspired to enter the race.

“After much discussion with them (the Democratic Party) and my wife, I finally decided that someone has to run even though I know what the odds are,” Dartland said. “No matter what, we should aggressively campaign and we should expect to win.”

Dartland received his law degree from the University of Michigan before serving in the United States Marine Corps. He worked as the Miami-Dade County Consumer Advocate for over a decade before he served as deputy attorney general under the popular Florida Attorney General Bob Butterworth.

Dartland has gotten meager resources from the party for his campaign. He was disappointed by this but understands that there are closer races for both the House and the Senate that the party needs to invest in.

One of the issues that Dartland is most concerned about is campaign finance. If elected, he would fight to overturn the controversial Citizens United Supreme Court ruling that has opened the doors to virtually unlimited campaign spending through super political action committees, or PACs. Dartland does not have a super PAC registered under his name.

In order to tackle the problem of unemployment in District 2, Dartland emphasizes the importance of maintaining the environment and investing in education.

“We have to make sure that our lakes and waters are pristine so that we can attract tourists to this area in Florida,” Dartland said.

Dartland is a proponent of making community colleges and trade schools free in order for low-income individuals to get the skills they need to be competitive in the job market.

His platform also includes gun control reforms such as background checks and waiting periods, as well as raising the minimum wage to $15 an hour.

Also running is Libertarian Party candidate Rob Lapham, the co-founder of a tech company who ran for Congress in Texas before moving to Gulf County.

“With the two old parties, there is sufficient corruption going on in both of them and I think people are pretty disgusted and are looking for an alternative,” Lapham said. “I believe and I’m hoping that the Libertarian Party is that solution.”