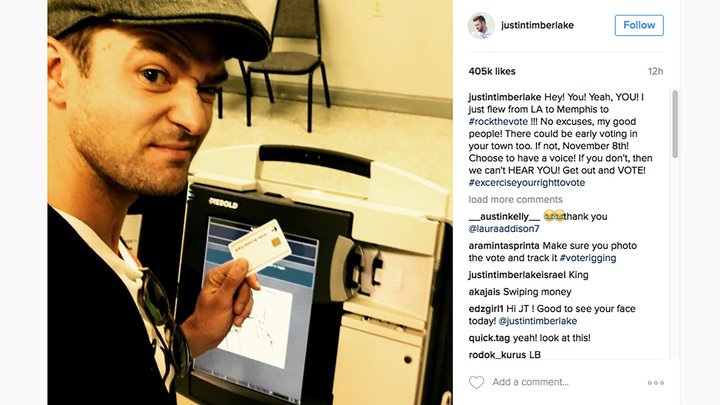 The Ballot Selfie: Illegal in Florida

A selfie might seem harmless, but in some states a selfie taken in front of your voter ballot might cause legal trouble. The “ballot selfie” is illegal in Florida.

Controversy about the “ballot selfie” came after Justin Timberlake posted a picture on Instagram, which went under review by authorities in Tennessee this week. The selfie was taken at a voting booth in Timberlake’s hometown.

He is standing in front of a ballot machine with the caption: “I just flew from LA to Memphis to #rockthevote!!! No excuses, my good people! There could be early voting in your town too. If not, November 8th! Choose to have a voice! If you don’t then we can’t HEAR YOU! Get out and VOTE!”

Taking a photo or recording audio in a voting booth is a crime in Tennessee. So although his message was clear, his actions were illegal.

Authorities in Shelby County, Tennessee, told TMZ that no one in their office is currently investigating this matter. Timberlake deleted the post.

Ballot selfie laws largely differ from state to state, and in Florida, photos are not allowed in polling places or of mailed ballots.

“Inside every polling place, all of my operators are checking in voters and monitoring the tabulation machine and all other activity,” said Marion County supervisor of elections Wesley Wilcox. “If we see someone pulling out their phone, we will remind them that photography in a polling place is illegal in Florida.”

According to a review by the Associated Press, 18 states have laws against sharing any photo of your ballot, while six states don’t allow photographs in polling locations but do allow photos of mail-in ballots. In 19 states and the District of Columbia, ballot selfies are legal.

“I personally have not seen anyone violate this, but we’ve also had 16,000 early voters so far,” said Wilcox. “You put 16,000 people together, I’m sure there are people who have taken out their phone and taken a quick selfie. I’ve seen people post pictures of themselves with their mail-in ballot at home.”

Wilcox says after a ballot leaves his authority and is sent to the voter, he cannot control those who are taking photos with their mail-in ballots and posting them online.

“They really weren’t forceful with the rule. A man who was outside the door said ‘phones off’ and there were signs all over, but when I was voting in my personal cubicle, I could have easily took out my phone and taken a picture,” said Marissa Gavin, an early voter in Alachua County.

Snapchat argues that sharing voting pictures on its social platform is crucial, especially among millennials, to encourage people to vote and support a cause or candidate. States banning the ballot selfies say they’re trying to protect the secrecy of the ballot for a fair election and stop any possibility of buying votes, since those offered money to vote for a candidate could be required to take a ballot photo as evidence before receiving payment.

Another early voter in Alachua County, Andrea Miranda, said her polling place made her turn her phone off before entering a booth.

“I liked that you had to turn off your phone when you walked in because it helps you focus on what you’re there for, which is voting for a president,” Miranda said. “You can still snap a picture after with your sticker or post a status, but I don’t think phones should be allowed in the ballot boxes.”

“I would caution everyone not to take a photo with your ballot, especially in today’s environment. If you take a picture with your voted ballot, know that if you post that anywhere, somebody somewhere has a problem with the way you voted,” said Wilcox.

For now, these laws vary from state to state. In Florida, voters should stick with posting a picture of your “I Voted” sticker because a ballot selfie could land you in legal trouble.

Evyn is a reporter who can be contacted by calling 352-392-6397 or emailing news@wuft.org.
Previous Hurricane Season Does Not Increase Zika Risk For Gainesville, Experts Conclude
Next Watch: Ma Barker House Floats Across Lake Weir To Its New Home