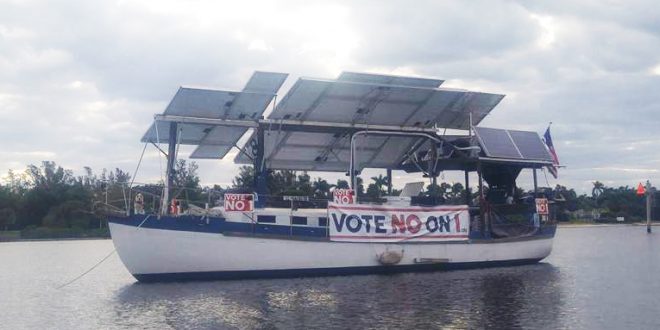 Captain Carter Quillen requires three things when it comes to sailing on his boat: a woman, a dog and a bunch of solar panels.

Seven years ago, Quillen began building The Archimedes, the world’s largest solar-powered concrete boat — though he said it does run on gas when needed.

Quillen said he and his partner, Diane Eggers, and their dog, Radar, stayed on the St. Johns River in eastern Florida as Hurricane Matthew pummeled the East Coast earlier this month.

“If we had a distributed system of energy,” he said, referring to sources like solar and wind, “90 percent of the people would never lose power. We never lost power. We had power all through the hurricane.”

On Oct. 12, once Hurricane Matthew had ended, The Archimedes embarked on its third trip through the Florida Intracoastal Waterway.

But with this trip comes a specific purpose: educating people about Amendment 1, or the solar amendment.

For the trip, Quillen partnered with the Southern Alliance for Clean Energy. He started in Jacksonville and is hugging the Florida coast, and he plans to reach Miami by Thursday. He might wrap around the peninsula and get as far as Tampa, but he doesn’t know for sure yet.

Along the way, he’s stopping at coastal cities and holding press conferences and events to raise awareness about Amendment 1.

Amendment 1 is divided into two sections. The first says Floridians have the right to utilize solar power. The second would allow the government as well as utility companies to charge consumers for switching to solar power and away from the traditional power-grid structure.

But Jennifer Rennicks, a spokeswoman for Southern Alliance for Clean Energy, said that Floridians already have the right to solar power and is encouraging residents to vote no because of the second section.

Among Southeastern states, Florida contains some of the most restrictive barriers when it comes to solar power, Rennicks said. Florida is third in the nation for solar-energy capability but is actually ranked 14th.

In August, 73 percent of Florida voters voted in favor of Amendment 4, which removes the personal property tax for solar installation, Rennicks said. Amendment 4 will go into effect in 2018.

Screven Watson, a board member for Amendment 1 backer Consumers for Smart Solar, said his organization supported the passage of Amendment 4 but that Amendment 1 has benefits, too.

“Government will retain their ability to stay involved in solar energy,” Watson said of Amendment 1. “It doesn’t create any new hurdles, any new powers.”

But for opponents like Quillen, there’s fear the utility companies and lawmakers are attempting to “tax the sun” to discourage Floridians from using solar power.

“There’s more solar [power being used] on Long Island then there is in the whole state of Florida,” Quillen said. “There’s something wrong with that picture.”