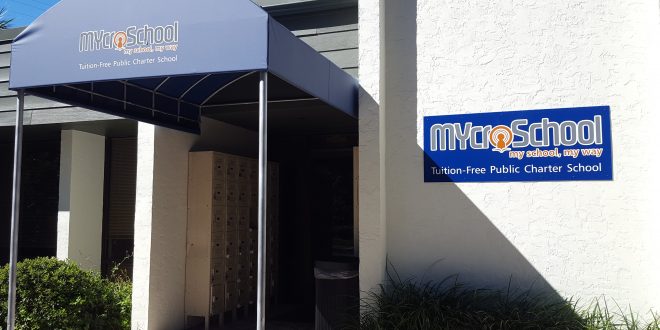 On a small, isolated corner at Northwest 13 Street and Northwest 22 Avenue in Gainesville sits the MYcroSchool, a tuition-free public charter school.

The school is designed to help students in eighth grade to high school who have dropped out of other schools or are not meeting their academic requirements.

The school opened for the 2011-12 school year, and now, its students coming from the cities of Alachua, Hawthorne and Newberry will be able to get there for free on Alachua County school buses.

School buses already go to those areas to pick up magnet students who attend Gainesville High School, Moore said, so no additional buses or routes will be needed.

But pick-ups will be dependent on whether the buses have seats available, and only a few MYcroSchool students will be affected, he said.

Yet the decision could have a greater impact if more students enroll in the school, Moore said.

“There are a few students that might want to attend the MYcroSchool that live in the outlying areas that aren’t served by RTS,” he said. “This would allow them to ride on our buses that are coming into Gainesville.”

There will be no cost increases to the county for the added students riding the buses, Moore said.

But he added that he isn’t sure when MYcroSchool students can start using the buses.

Alachua County Schools’ transportation department, which operates the buses, does not anticipate many students to be affected by the change, said James Speer, director of transportation.

“We don’t anticipate many [MYcroSchool students riding], but it will be a good indicator of the need in those areas on a permanent basis,” he said.

MYcroSchool has a little more than 200 students enrolled, and they’re mostly between ages 18 and 19.

The purpose of the school’s curriculum is to re-acclimate students to the learning environment and allow them the opportunity to go to college, said Daniel Barnett, MYcroSchool’s dean of students.

“The curriculum is designed for students who were not successful in the traditional format,” he said.

The school focuses on core subjects while offering classes in professional and trade careers, according to its website.

Principal Randy Starling said he hopes the bus routes will allow for more students to attend.

Madison Belfour is a reporter for WUFT News and can be reached at 352-392-6397 or mbelfour@ufl.edu.
@@madisonbel4
Previous Florida Votes 2016: Putnam County Commission District 5
Next Solar-Powered Boat Touring Florida To Oppose Amendment 1