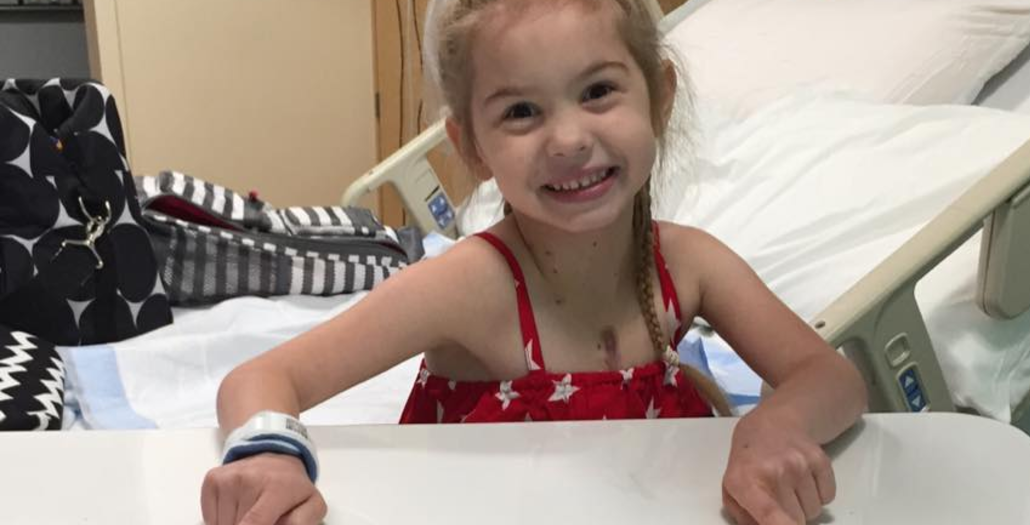 Four-year-old Kendall Lewis has battled VACTERL association since birth. The rare disorder is estimated only to appear in less than 2 per 10,000 live births. (Photo courtesy of Mindy Lewis)

Kendall Lewis’s mother had no idea something was wrong when her daughter was born.

“When (doctors) took the suction down to clear all the secretions in her throat, they knew that they couldn’t pass it all the way down,” Mindy Lewis said. “They went to take a temperature and as you know, they take the temperatures rectally on babies. She didn’t have an opening to her bottom.”

Over the next few days Lewis and her family found out Kendall had VACTERL association, a rare disorder that affects different systems of the human body. The National Organization for Rare Disorders places the incidence of VACTERL association at 1.6 per 10,000 live births. Since she was born, Kendall has undergone seven different surgeries to correct her structural abnormalities.

“I had never heard of it before,” Lewis said. “Knowledge is power and I didn’t have any of it.”

VACTERL is an acronym composed of seven components.

People diagnosed with VACTERL association typically have at least three of these characteristic features, according to the US National Library of Medicine. Kendall, now 5 years old, has six of the seven features.

V: Vertebral Defects. Kendall has half of an L4 vertebrae and a tethered spinal cord, a neurological disorder that restricts the movement of the spinal cord within the spinal column.

C: Cardiac Defects. Kendall has Tetralogy of Fallot, a combination of four heart defects, with pulmonary atresia (where the pulmonary valve does not form properly).

T and E: Tracheo-Esophageal Fistula. Simply stated, Kendall’s esophagus was not attached to her stomach when she was born.

R: Renal Anomalies. On her right kidney she has an extra pole with its own duplicated collection system.

L: Limb Abnormalities. Kendall does not have that component. All of her limbs are intact.

Kendall jokes around and says she is shy. But when asked what one word describes her, she jumps up and yells “Kooky! Crazy!”

Kendall declared herself Miss K as soon as she could speak. People would call her Kendall, and she would demand to be referred to as Miss K.  Now all the doctors, nurses and volunteers at UF Health Shands in Gainesville play along and call her Miss K.

She loves to dance and shows off her moves while singing “House Party” by Sam Hunt. Like any 4 year old, Miss K also loves to talk about herself.

Miss K had her first surgery at 5 days old to fix her esophagus and create an opening in her bottom. She had another at 26 days old. Two heart surgeries and a heart catheter procedure followed.

“You see all these kids and you see everything that they go through and they’re not themselves,” said Erick Esquerete, a UF Health Shands volunteer. “Then you go to Miss K, and she’s more than you can even ask for. She’s super extra. She’s crazy, and that’s all you really want from a child.”

Dr. Renata Shih, a pediatric cardiologist at the Congenital Heart Center at UF Health, has been Kendall’s doctor since 2012. Shih jokes that Kendall will not be an Olympic gold medalist, but she is certainly a winner.

“We do EKGs. We do echoes, invasive procedures, and she always takes it like a champion,” Shih said.

Three days after her last open heart surgery this summer, Miss K was painting nails in her hospital bed. She asked Esquerete if she could paint his nails with different colors and patterns.

“She went ballistic,” said Esquerete. “I was like ‘Yeah, absolutely! You can paint both hands if you really want to.’”

He walked all around the hospital showing off Miss K’s work and telling volunteers about the fun in Miss K’s hospital room.

Shih said Kendall is always full of energy, so it is easy to tell when she is not feeling her best.

“If you look at her with her clothes on, you could never tell that she has anything at all,” Shih said.

Lewis said she believes Kendall has a higher power in her court. Kendall hit all of her developmental milestones ahead of schedule and walked before she was even 1 year old.

“For as much as she has going on, she is a trainwreck on paper, but when you see her in person, she looks like a perfectly normal kiddo,” Lewis said.

Miss K says she wants to be a doctor, a dolphin trainer and a nurse when she grows up.

Lewis tells Miss K that she will be halfway through med school once she finally figures out what is wrong with her.

Editor’s note: This story has been updated. Kendall Lewis has turned five-years-old since her story was first reported.

Alexa is a reporter for WUFT News and can be contacted by calling 352-392-6397 or emailing news@wuft.org.
Previous Oct. 21, 2016: Afternoon News In 90
Next Amendment 1 Language On Florida’s Ballot Is Causing Confusion