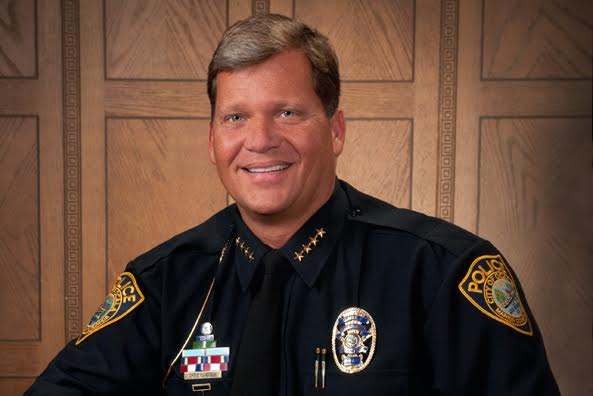 Ocala City Council voted unanimously to reappoint Police Chief Greg Graham on Tuesday, depending on the outcome of his investigation.

This means his contract with the city has been renewed for another two years, according to Ocala Human Resource and Risk Management Director Jared Sorensen. However, his suspension is still in place.

Graham had a grievance filed against him on Sept. 15 by three Ocala Police Department officers who accused Graham of sexual harassment, hostile treatment, retaliation and discrimination.

On Sept. 23, Graham agreed to be placed on paid administrative leave.

Ocala Mayor Kent Guinn said last month that the investigation would be completed by Oct. 20. But as of right now, Police Chief Graham has been reappointed, and the City Council is waiting to hear the verdict of the investigation.

“The charter says to reappoint every two years,” Guinn said after the meeting. “The allegations against Police Chief Graham are not substantiated.”

Before the council voted to reappoint Graham, the public had a chance to speak their thoughts on the matter. One of those people included attorney Bobi Frank, who represents the three police officers who filed the grievance.

“If you appoint Greg Graham as the leader of the police department,” she said, “you are, in effect, giving every single police officer at that department and the community at large the license to sexually harass and discriminate against police officers without fear of reprisal.”

Frank’s strong words were met with quiet murmurs of agreement throughout the audience.  And after her speech, attorney Edward McClellan, who represents Graham, urged council members to remember the years Graham has given the city.

“I think it would be a travesty now, with the investigation in process … to toss a 33-year career in law enforcement away,” McClellan said. “To do that would be unfair and unjust, and it would not be appropriate for the city or for Chief Graham.”

But some citizens believed that the handling of this case has been unfair to the victims and witnesses in the investigation.

Whitfield Jenkins, 76, told the council they should have recused themselves if they were too close to the problem.

“Are you too close to Greg Graham?” he asked of each member.

Jenkins, president of Liberation Ocala African American Council, Inc., said he doesn’t think the council looked at all sides of the situation when they reappointed Graham.

He said it could be an expensive process to terminate him if the results of the investigation aren’t in Graham’s favor.

“How much money will this cost us?” Jenkins asked.

For attorney Frank, the decision to reappoint Graham was disappointing, but expected. She said the council hasn’t made the right decision the entire time. But this grievance battle could turn into a lawsuit against the city.

“If they continue to violate my clients rights, I don’t have any options,” Frank said. “(My clients are) beat up, tired already, but my job is to continue to pursue their interests in the community they have served and protected for a long time.”

Attorney McClellan said, for Graham, the results of the meeting were the best he could have received.

“She can do whatever she wants to do,” McClellan said. “I don’t think this complaint was properly investigated before it was filed.”

He said it would have been careless to not go through the process of reappointing the Police Chief. The results of the investigation can be settled after all the facts have come out.

“Chief Graham has been tried in the media without hearing his side,” McClellan said, “which people will hear when the results come out.”

Danielle is a reporter for WUFT News and can be contacted by calling 352-392-6397 or emailing news@wuft.org.
Previous Robbers Hold 9-Year-Old Girl, Mother At Gunpoint In Ocala Store
Next Oct. 19, 2016: Afternoon News In 90