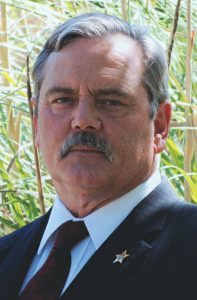 Dixie County is one of the ten smallest counties in Florida.

There are 15 times the amount of people in Alachua County compared to Dixie. It’s small enough for people to know or recognize each other. Incumbent Sheriff Dewey Hatcher has spent his whole life in Dixie, minus a couple stray years. His inspiration for taking office was his mother who had been tax collector for 12 years, as well as his family members who have taken office in Dixie through the years.

Hatcher has been sheriff for 16 years, and he’s planning on adding another 4. But unlike in past elections, his opponent this time, Christopher Cambron, rubs him the wrong way.

“I’ll openly talk about Cambron, because he’s just not right. He’s the only opponent I’ve ever had that I’d say anything bad about,” he said.

Cambron did not respond to an interview request, but his YouTube videos demonstrate his stance toward politics and local law enforcement. Cambron announced his run for sheriff on YouTube.

Hatcher says Cambron won’t get elected. Since Dixie is a small area, Hatcher says they just avoid each other.

Chase is a reporter for WUFT who can be reached by calling 352-392-6397 or emailing news@wuft.org.
Previous Just A Drill: First Responders Prepare For Plane Crash At Gainesville Airport
Next A Clown-less Halloween? Gainesville Target, Other Locations Remove Masks