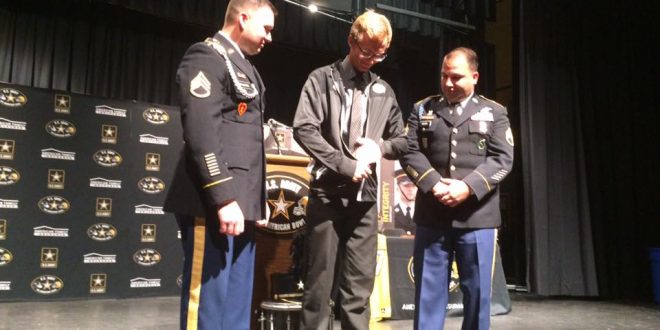 Buchholz High School senior Ben Harbaugh has been playing the trombone since he was 12 years old.

And now, the 17-year-old is preparing to take his talents to the U.S. Army All-American Bowl.

In a ceremony Monday morning, members of the U.S. Army and Ben’s fellow band students celebrated his acceptance into the 2017 U.S. Army All-American Marching Band, which will perform at halftime during the game.

“I’m actually really excited,” Ben said after the ceremony. “I get to take a week off from school. That’s probably not a good thing because I’ll be missing a lot, but I don’t care. I’m gonna be excited.”

Of the 1,200 musicians and color guard members from around the country who applied, only 125 were selected.

“I’m not aware that we’ve had an All-American marching band member at Buchholz,” said Shawn Barat, the Gainesville school’s band director. “It doesn’t happen very often, so this is kind of a big deal.”

Others who attended the ceremony shared in the excitement.

“I don’t know how to describe it. I’m just really happy for him,” Buchholz trombonist Rashaid Blocker said. “Friend is something I use for people I just hang out with. Ben’s more like family to me. … We hang out all the time, and we do everything together.”

Ben serves as a musical and leadership role model in the band program, Barat said.

“It’s a privilege to be able to work with someone like Ben,” the band director said. “His daily impact and his contributing to the success of this band program goes beyond anything that you can see every day.”

Army Sgt. 1st Class Jimmie Brown said during the ceremony that students selected for the bowl must “possess the strengths of a soldier and live the Army values: loyalty, duty, respect, selfless service, honor, integrity and personal courage.”

“Ben embodies the characteristics and values of an Army soldier, and we’re proud to have him on our team and to wear the All-American colors,” Brown told the roughly 100 people gathered at the school’s auditorium.

Ben said he wouldn’t have had the opportunity to march in the Army band had it not been for his parents.

“I actually liked playing sports and stuff, but my brother liked band,” he said. “I didn’t want to do band because I like sports … but my mom made me do it. I was kind of really sad, but it was fine in the end.”

“I don’t think it was me, actually,” she said. “My dad played the drums for the Army marching band back in the Korean War, and my husband, Kurt, Ben’s dad, is a musician. He plays drums and guitar.”

Karen Harbaugh said regardless of how Ben started playing, she never had to force him to practice.

“He loves practicing,” she said. “I can honestly say that just about every day, Ben plays his trombone or horn, and just for fun, he jumps on the piano or picks up a recorder. He’s always watching music videos and marching bands, and he writes his own music.

Ben said that love and the encouragement from past U.S. Army All-American Marching Band members drove him to apply in May.

He said the application process consisted of recording himself playing the baritone, completing a marching drill, and marching left to right in box. He also had to collect letters of recommendation and produce a video essay.

During rehearsal in mid-July with the Boston Crusaders Drum and Bugle Corps, a prestigious musical group for those 22 and younger, he was contacted about his acceptance.

“At that point, I was in the middle of practicing, so I couldn’t really focus that much,” he said. “But it was just really reassuring that I got in.”

Ben and clarinetist Cindy Ai, who attends Eastside High School in Gainesville, will fly to San Antonio to perform in the game on Jan. 17. Eastside is scheduled to have a similar ceremony for Cindy on Nov. 18 at 1:30 p.m.

Ben is set to graduate from Buchholz in June 2017. He’s looking to apply to the University of North Florida but is planning to go into nursing instead of music.

“But I definitely will join the band,” he said. “If there’s a marching band, I’m gonna get in there, and I’m gonna keep playing.

“I’ll still play for the rest of my life.”