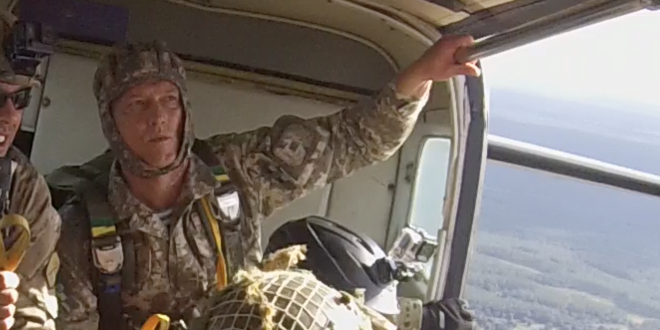 Friends and fellow parachutists are remembering a 49-year-old jumpmaster who died Friday in a Marion County jumping accident.

“Rest in peace, brother,” one commenter wrote on a Facebook post from the European Paratroopers Association set up as memorial to Dmytro Zinchenko. “Your wings will get you to [Elysian Fields], where I hope we will meet and fly together again.”

(In Greek mythology, Elysian Fields is “the paradise to which heroes on whom the gods conferred immortality were sent,” according to Encyclopaedia Britannica.)

Zinchenko, an airborne instructor and Ukrainian reserve paratrooper who served in the Soviet-Afghan War, passed away Friday evening after his reserve chute accidentally deployed while he was preparing to jump from a small plane that took off from Marion County Airport. This slammed him into the body of the plane and sent him out of it.

Zinchenko, who most recently lived in Italy, was a jumpmaster who had 147 registered military jumps in his career.

As of Monday afternoon, the Facebook post had more than 90 comments from family, friends and strangers expressing their grievances and respect for Zinchenko.

“My feelings go out to his family in this time of sadness,” Julius Fulgor wrote. “For me, [he] was a very close friend and true comrade. I will miss you, Brother.”

“No words could describe how great this man was,” Giorgio Graziano commented. “Just five days ago, all together, smiling, eating, jumping. Few days of real comradeness.”

Zinchenko was visiting the National Parachute Test Center at the airport in the city of Dunnellon to participate in “friendship jumps,” according to Robert Mathews, an ex-Marine and CEO of the test center. Such events feature jumpers from different countries jumping together and exchanging tokens from their respective countries.

Zinchenko had planned to share his Ukrainian wings with the eight other jumpers who were on the plane.

The accident happened in the sixth of 36 planned group jumps that were jumping from a Cessna Caravan plane in Marion County, Mathews said. There were several other foreign jumpmasters participating in the jumps.

“As the jumpmaster, it was his job to see that they were safely dispatched,” Mathews told WUFT News.

Zinchenko was kneeling in the door aiding other jumpers when his reserve parachute inadvertently deployed.

“There was a group of people there, and he was assisting [a] jumper out of the jump,” said Valerie Strong, a spokeswoman for the Marion County Sheriff’s Office. “He was on the side helping people jump” when the accident happened.

The reserve chute pulled him through the side of the airplane, causing “significant damage” to the plane, Mathews said.

Though it’s not known for sure, Zinchenko possibly died as his body slammed into the plane once the reserve chute deployed.

The plane was at an altitude of about 2,000 feet, which is standard for military-style jumps. When he was found on the ground, he was unresponsive.

“By all estimations, he was deceased as he went through the side of the airplane,” Mathews said of his body’s impact. “It was unfortunate, tragic. We’re in deep grief.”

Mathews estimated that he has overseen more than 30,000 parachute jumps since 1959, and he has never seen a fatality.

“We are absolutely distraught,” he said. “He was a highly qualified individual.”

Mariana is a reporter who can be contacted by calling 352-392-6397 or emailing news@wuft.org.
Previous Gainesville Officer Receives DOJ Award For Community Policing
Next Florida Votes 2016: Dixie County Commission District 1