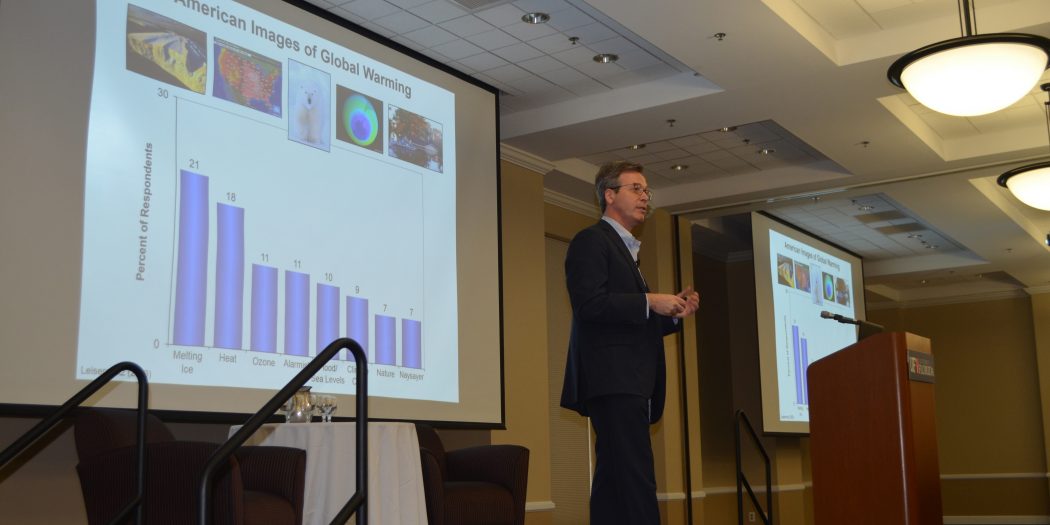 For the second year, the University of Florida hosted a free event to encourage dialogue about climate change. This year’s theme was ‘Higher Ground: Science, Storytelling and the Climb Toward Better Understanding of Climate Change.’

“Climate change is one of the most important stories of our time, yet politics and scientific uncertainty make it one of the toughest stories to tell,” said Cynthia Barnett, an environmental journalist in residence at the UF College of Journalism and Communications and one of the organizers for Wednesday’s event.

Banerjee kicked off the presentation with a look at our nation’s political climate in regards to climate change, specifically pointing to a 2012 tweet by Donald Trump.

“The United States is the only developed country where a major political party has made climate denial a touchstone of its ideology,” Banerjee said.

She said for years reporters have been writing stories about climate science in the hopes of making the issue accessible to readers. Despite the coverage, she said there exists a growing subset of Americans that adhere to the notion of “climate denial.”

Banerjee and her colleagues at Inside Climate News, a non-profit news organization devoted to climate change, energy, and the environment, focus on asking the question why. Why has “climate denial” become a norm? She calls for an increase in investigative reporting on the issue.

Leiserowitz continued the presentation with a focus on empirical data from his research at Yale University. Leiserowitz investigated the psychological, cultural, political and geographic factors that drive public environmental perception and behavior.

“We’ve done a far better job explaining the problem than we have the solutions,” Leiserowitz said.

This one-sided presentation of the issue has contributed to what Leiserowitz described as a “distancing” from the issue. He said many people now think of the idea of climate change as distant, perhaps ice caps melting in the Arctic, but almost never in terms of how it affects their daily lives.

He categorizes American public interest on climate change into six major groups: those who are alarmed, concerned, cautious, disengaged, doubtful, and finally, those who are dismissive. Despite the array of public opinion on the issue, Leiserowitz said going forward there are core ideas people need to understand about climate change.

He said journalists, scientists, and politicians need to focus on finding and presenting solutions and working together to unite people across the political spectrum.

“That is the art of politics, finding solutions that completely different people can come to support for their own reasons,” he said. “There’s a wonderful Christian phrase, ‘There are many roads to Damascus,’ well, likewise, there are many roads sometimes to these solutions.”

Danielle is a reporter for WUFT News and can be contacted by calling 352-392-6397 or emailing news@wuft.org.
Previous Oct. 13, 2016: Afternoon News in 90
Next Upcoming Roadway Construction May Affect Gainesville Residents And Businesses