Who will serve as Alachua County sheriff beginning in 2017? County voters in November can choose between incumbent Sadie Darnell, a Democrat, and challenger Jack Jacobs, a Republican. 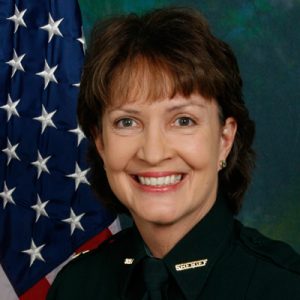 Sadie Darnell was born and raised in Gainesville and has lived in Alachua County for the past 38 years. She went to Santa Fe College and went on to earn her Master’s Degree in Educational Leadership from the University of Florida. She worked for the Gainesville Police Department for 30 years until she retired and was elected sheriff in 2006, 2008, and 2012.

Darnell said she decided to run for office again because she still loves the job and has a number of things that she would like to accomplish.

Darnell said she hopes to continue her work on training for crisis situations with citizens that have mental illnesses. She also wants to enforce programs to prevent domestic violence crimes, which she said are the most deadly for law enforcement. Finally, she hopes to intervene in the lives of youth to make sure they are able to be safe and thrive in the community.

“I’ve been in law enforcement for 38 years,” Darnell said. “It’s a calling to me, it’s not just a job. I care about this community.” 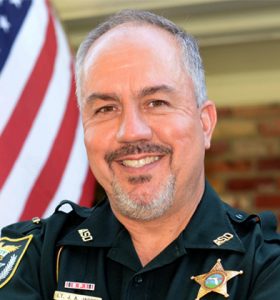 Jack Jacobs retired in May from the Alachua County Sheriff’s Office after serving for 31 years. He said he thought about running for sheriff after retirement because he felt his experience and training has given him the skills to service the community.

Jacobs was born in Ohio, but moved to Gainesville right after high school to attend the University of Florida in the early 1980s. He went into the police academy during college and was hired in 1985, working there until his retirement this year.

Jacobs said he wants to implement training programs to address the problems of bias and perspective. He hopes to lead a proactive police force and bridge the gap between the community and police, bringing respect back for both the citizens and patrol deputies.

Gun control and Stand Your Ground

Both candidates said that they support the Second Amendment.

Darnell said that she supports legal and safe gun ownership. She said that the Florida Sheriff’s Association, for which she has served as president, takes a large role in the legislative committee when gun control and stand your ground issues are raised.

Jacobs said he was endorsed by the National Rifle Association and is an advocate of people being able to defend themselves until law enforcement arrives.

“In a perfect world, we would be able to protect everyone all the time, 24/7, but that’s not the case,” Jacobs said.

He said that he supports responsible gun ownership and thinks it’s crucial for people to be able to defend themselves lawfully.

Excessive use of force

Jacobs said he knows every law enforcement officer’s goal is to go home safely to their family at night, but it is important for the sheriff to ensure that there is proper training within the agency.

“I don’t think right now any police agency is exempt from that,” Jacobs said. “Everybody needs to be up to speed on their training.”

Jacobs said he believes his experience as a Use of Force instructor will aid him as sheriff to implement training and assess these situations.

He said that roleplaying and force-on-force scenarios are things that the sheriff’s office does now, but that he feels needs to be more used.

Darnell said that the use of excessive force is not a problem until it happens.

“We do not have a trend or a large amount of issues that come up that are substantiated as being excessive force, but any time we get a complaint, referral or concern regarded as being excessive use of force, it is fully investigated at the criminal level,” Darnell said.

Darnell said she believes the current culture of the sheriff’s office is reflected by the great amount of accomplishments that the dedicated men and women have been able to perform.

“We are certified at the highest level at every level within the agency,” Darnell said. “It happens because people are making it happen.”

Darnell said that in any large organization you will have about 10 percent of employees who are disgruntled, but she said she does not waste a lot of time or energy on those 10 percent because most of those attitudes cannot be changed.

Jacobs said he believes an improvement in the culture is needed, especially in leadership.

He said the direction on the type of policing and current goals and objectives should be cohesive from the top down, not just within specific units.

Jacobs said police relations within the community is the biggest issue facing Alachua County in 2017.

Jacobs said implementing training programs for fair and impartial policing is important. He also believes that making a connection to the community is important so that officers and citizens can know what they need to do to help one another.

“It goes back to true community policing where you have officers out on foot, or making contact in cars or at traffic stops. Basically going into those neighborhoods and getting to know those neighbors and businesses,” Jacobs said.

He said it is crucial to be a proactive police force and go after problems in the community before they occur, but it is important for the community to understand that law enforcement is just trying to do their jobs, Jacobs said.

Darnell said that the sheriff’s office has had anti-bias policies in place for years that require supervisors to randomly review deputies’ calls and tapes.

“We have to recognize that there is implicit bias in all that we do, based on our experiences and circumstances,” Darnell said. “We always seek to make sure that we are having a good dialogue about it and that we have good outreach in the community.”

Samantha is a reporter for WUFT News and can be reached at news@wuft.org or 352-392-6397.
Previous Podcast: East And West Gainesville’s Healthcare Divide
Next Podcast: We’re The Damn Millenials