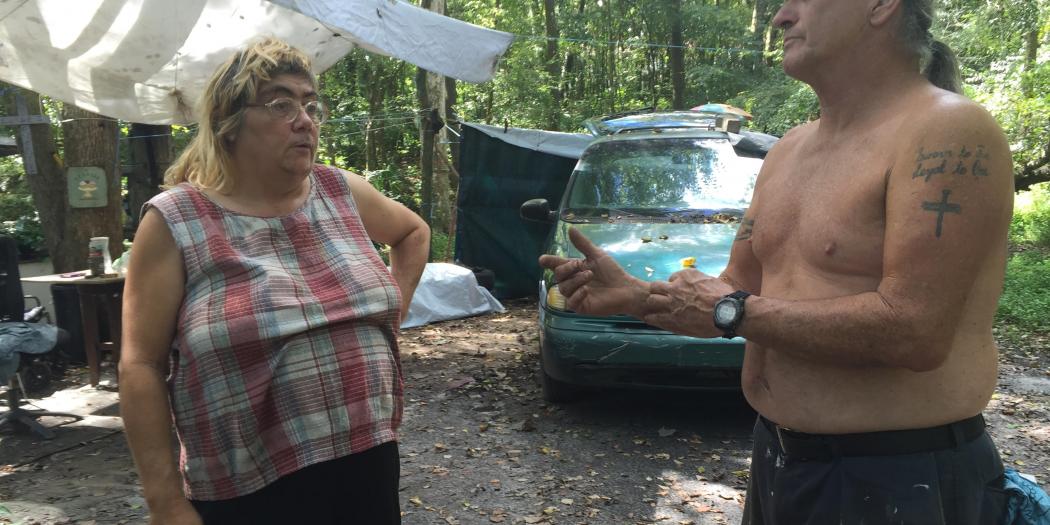 Rosalie Sherman (left) and Doug Ashcraft, who live together at the Sweetwater Branch homeless camp, discuss their plans for the future after receiving a notice to vacate the camp by Oct. 10. “This is our home,” Sherman said, crying. “This is the only home we knew." (Michaela Steakley/WUFT News)

Doug Ashcraft is being evicted from his campsite, but he said he isn’t angry about it.

“I’m grateful for the time,” the Gainesville resident said of the four-plus years he’s lived at the Sweetwater Branch homeless camp, where he stays in a tent with his girlfriend, Rosalie Sherman, and their four dogs. “In fact, I’m so grateful, I’m taking all this stuff down and cleaning it before I leave.”

Ashcraft and the other residents of the camp near the intersection of Southwest Williston Road and Southwest 16th Avenue received a notice on Sept. 26 to vacate, and they have until Oct. 10 to leave.

The reason for the notice remained unclear as of Tuesday, but Miriam Elliott suspects it might be because of a walk-through Alachua County officials conducted at the camp months ago.

Elliott, immediate past chair of the Alachua County Coalition for the Homeless and Hungry, said residents of the camp told her that Alachua County Codes Enforcement, Gainesville police, and either someone from the Florida Department of Health or the Environmental Protection Agency walked through the camp because of concerns about trash at the site.

“In the course of that walkthrough,” Elliot said, “they determined that there were health hazards in addition to the trash existing due to the fact that there were no toilet facilities on the property.”

Some of the concerns about waste were related to the proximity of Sweetwater Creek, which runs alongside the camp, she said.

This isn’t the first time a homeless camp in Gainesville has faced eviction. In 2014, those who lived at the “tent city” off the Hawthorne Trail near Fourth Street were also asked to leave.

While some of the residents of the Sweetwater Branch camp were frustrated by the situation and the short period of time they have to evacuate the camp, others were more accepting, Elliott said.

“One of the things I admire in my long career serving the homeless is how resilient, flexible and adaptable they are,” she said.

While Ashcraft seemed more upbeat, Sherman said she is sad about leaving the camp.

“This is our home,” she said, crying. “This is the only home we knew. Now you’re really snatching our home, but we can’t fight it because it’s not our land.”

Sherman and Ashcraft have started deconstructing their camp, starting with the tarps that served as a fence.

Ashcraft said he plans to wait until the last minute to take down the rest of his belongings, most of which he plans to burn and leave behind.

“I never dreamed I’d be out here this long,” he said.

Sherman said she feels more attached to the land than her boyfriend does.

“I felt like home in the woods,” she said. “I mean, that sounds crazy, but it was home to me.”

However, she said she has hope for the future.

“It don’t matter how bad it gets,” Ashcraft said. “Don’t never lose your joy and your faith, because if you lose them two, you ain’t got nothing to live for.”

Michaela Steakley is a reporter for WUFT News and can be reached at 352-392-6397 or msteakley94@ufl.edu.
Previous Homeless Concerned For Safety As Storm Approaches
Next Gainesville Residents Try To Stop Creepy Clowns On The Street