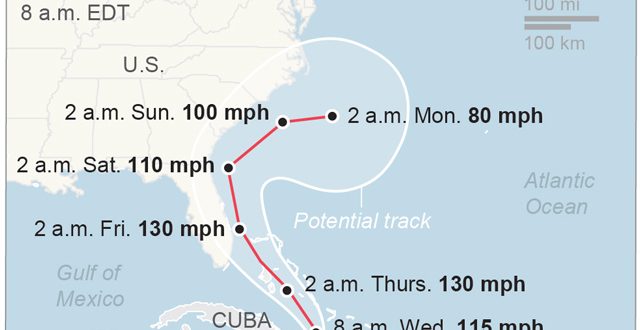 Matthew is a dangerous and life-threatening Category 3 storm with sustained winds of 120 mph, and it is expected to be very near Florida’s Atlantic coast by Thursday evening. At least 11 deaths in the Caribbean have been blamed on the storm.

The Hurricane Center said that while maximum winds had decreased slightly, the fluctuation in intensity was expected and some strengthening is forecast in coming days.

Haley said 315 were dispatched to two major coastal counties to help with evacuations. The National Guard and other law enforcement agents are mobilized, ready to ensure an orderly evacuation.

In Florida, a message on Walt Disney World’s website Wednesday said all of its theme parks and resorts are “currently operating under normal conditions” as officials continue to monitor the storm. They advised those who plan on visiting Disney to monitor news outlets for the latest weather information.

Officials at SeaWorld in Orlando announced on its website that officials “anticipate altered hours due to Hurricane Matthew.”

Georgia Gov. Nathan Deal is declaring a state of emergency in 13 coastal counties because of Hurricane Matthew.

Deal’s office issued a statement Tuesday saying he is ordering the state emergency management and homeland security offices to work with local agencies to protect residents and minimize risks.

The state of emergency begins Wednesday and includes the port city of Savannah and Brunswick to the south.

While the storm’s exact track isn’t yet known, Deal says the storm could get dangerously close to the state’s coast within 72 hours.

Some airlines are letting passengers change travel plans without penalty if their trip might be affected by Hurricane Matthew.

United Airlines said Tuesday that it will waive change fees and any difference in fare for customers scheduled to fly Wednesday through Friday to, from or through five airports in Florida.

Delta Air Lines is waiving change fees on trips through Wednesday in the Caribbean and through Thursday at eight Florida destinations, although differences in the fare would still apply.

American Airlines says it will waive change fees on trips scheduled through Thursday in several Caribbean nations including Cuba.

The fee to change a nonrefundable ticket on United, American and Delta is typically $200 for domestic flights and usually more for international trips.

South Carolina Gov. Nikki Haley says she plans to issue an evacuation order Wednesday ahead of Hurricane Matthew so that 1 million people can safely and comfortably leave the coast.

Haley said at a Tuesday news conference that she will finalize the order Wednesday morning, unless there is a major shift in the storm’s track. Haley says she expects the evacuation to begin at 3 p.m. EDT Wednesday.

State officials say lanes on major evacuation routes will be reversed. It would be the first major evacuation since Hurricane Floyd in 1999, when the governor at the time didn’t reverse the lanes and Interstate 26 became backed up for hours and traffic was at a standstill. A two-hour drive from Charleston to Columbia turned into 24-hour nightmare.

U.S. President Barack Obama will speak Wednesday at the Federal Emergency Management Agency about the federal response to Hurricane Matthew.

Obama had been scheduled to travel to Florida on Wednesday for campaign events and a health care event. But the White House says the trip is being postponed because of the hurricane.

Instead, Obama will travel to the agency’s Washington headquarters to meet with officials coordinating the response. FEMA Administrator Craig Fugate will brief Obama on the latest developments if scheduling allows.

White House spokesman Josh Earnest says Obama will be updated on the weather forecast and on operational aspects of preparing for the impacts of the severe weather.

The White House says that President Barack Obama has been updated on the path of Hurricane Matthew and its potential impact in the Caribbean and the United States.

Earnest also says relief supplies have been prepositioned in the region.

The White House also says that U.S. foreign disaster assistance teams have been deployed to Haiti, Jamaica and the Bahamas to ensure that relief efforts are coordinated if U.S. assistance is needed.

Earnest says relief supplies are being moved into Albany, Georgia and Fort Bragg, North Carolina, so they can be delivered to affected areas quickly after the storm has passed.

Scott said while visiting the Daytona Beach area that evacuation orders could be issued as early as Tuesday.

He says Florida could start to feel the hurricane’s impact in two or three days.

The governor says his biggest worry is that residents won’t take seriously the threat from Matthew if an evacuation order is issued, especially since so many new residents have never lived through a hurricane.

The U.S. National Hurricane Center has issued a hurricane watch for South Florida.

The center issued the watch from Deerfield Beach to the Volusia/Brevard county line.

A hurricane watch means that hurricane conditions are possible within the watch area.

A tropical storm watch also is in effect from the Seven Mile Bridge in the Florida Keys northward to south of Deerfield Beach, including Lake Okeechobee.

Hurricane Matthew roared into the southwestern coast of Haiti on Tuesday, threatening a largely rural corner of the impoverished country with devastating storm conditions as it headed north toward Cuba and the eastern coast of Florida.

The dangerous Category 4 storm made landfall around dawn on Haiti’s southern peninsula, where many people live along the coast in shacks of wood or simple concrete blocks that are ill-suited to the force of the system’s maximum sustained winds of 145 mph (230 kph).

Matthew was causing major damage though the extent was not immediately known, according to Marie Alta Jean-Baptiste, the director of the country’s Civil Protection Agency.

“It’s much too early to know how bad things are but we do know there are a lot of houses that have been destroyed or damaged in the south,” Jean-Baptiste told The Associated Press.

Haitian authorities had tried to evacuate people from the most vulnerable areas ahead of the storm but many had been reluctant to leave their property. Some sought shelter only after the worst was already upon them.

“Many people are now asking for help, but it’s too late because there is no way to go evacuate them,” said Fonie Pierre, director of Catholic Relief Services for the Les Cayes area, who was huddled in her office with about 20 people.

Matthew was expected to bring 15-25 inches of rain, and up to 40 inches (100 centimeters) in isolated places, along with up to 10 feet (3 meters) of storm surge and battering waves, said Dennis Feltgen, a meteorologist and spokesman for the U.S. National Hurricane Center in Miami.

“They are getting everything a major hurricane can throw at them,” Feltgen said.

The storm was moving along the Windward Passage between Haiti and Jamaica, where it was also dumping heavy rain that caused flooding in parts of the country. It was headed for southeastern Cuba and then into the Bahamas.

The hurricane center said it would likely issue a tropical storm watch or hurricane watch for the Florida Keys or the Florida peninsula and that it could create dangerous beach conditions along the East Coast later in the week.

As dawn broke, people in the south coast tourist town of Port Salut described howling winds and big waves slamming the beaches and washing over the coastal road.

“The winds are making so many bad noises. We’re just doing our best to stay calm,” said Jenniflore Desrosiers as she huddled with her family in her fragile cinderblock home, which had sprung numerous leaks from pelting rain.

Haiti’s civil protection office said a number of south coast towns partially flooded overnight. Landslides and downed trees on roadways were preventing movement in numerous areas. The few places that were on the electrical grid had apparently lost power and cellphone service was spotty.

Haitian officials spent Monday trying to persuade shantytown residents to take advantage of shelters being set up, but many refused.

“If we lose our things we are not going to get them back!” said Toussaint Laine, an unemployed man who lives with his family in a shack in Tabarre, a suburb of Port-au-Prince, the capital.

In an unregulated sprawl of shacks built on hillsides near the northern edge of the capital, some poor families did what they could to reinforce their tin-and-tarp home and hoped for the best.

“I know my house could easily blow away. All I can do is pray and then pray some more,” Ronlande Francois said by the tarp-walled shack where she lives with her unemployed husband and three children.

Haiti’s civil protection agency earlier reported one death, a fisherman who drowned in rough water churned up by the storm. That raised Matthew’s death toll to at least three. One man died in Colombia and a teen was killed in St. Vincent and the Grenadines as the storm moved through the Caribbean.

Cuba’s government declared a hurricane alert for six eastern provinces and workers removed traffic lights from poles in the city of Santiago to keep them from falling when the storm hit.

At one point a Category 5 storm, and the region’s strongest hurricane since Felix in 2007, Matthew was expected to make landfall in Cuba about 50 miles (80 kilometers) east of the U.S. Navy base at Guantanamo Bay, where authorities flew out about 700 spouses and children of service members.

The Associated Press is a wire service to which WUFT News subscribes.
Previous A Leaning Tower At GRU, And The Return of Power from GREC
Next Injured QB Del Rio Could Be Ready By LSU Game

The first strong front of the fall season is set to arrive in Florida this week, with widespread showers and thunderstorms marking its arrival.