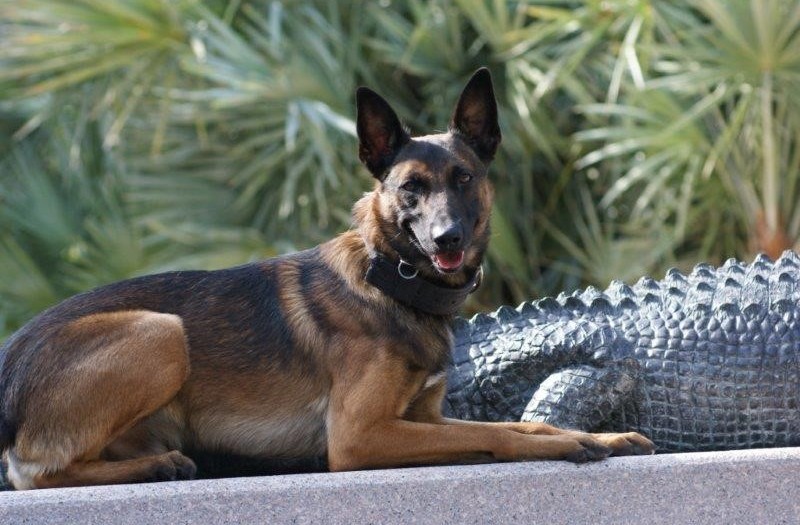 Deputy Willcox To Be Suspended For Death Of K9 Partner

Alachua County Sheriff’s Deputy Tommy Willcox will serve a six-day suspension from work without pay following an investigation into the heat-related death of his K9 partner, Robbie.

Robbie, a Belgian Malinois, was Willcox’s partner for six years before he died July 8, 2016. While off duty at home in Newberry, Willcox and Robbie responded to a call from the Gilchrist County Sheriff’s Office that Friday morning. Upon returning home later that afternoon, he inadvertently left Robbie in the car as he joined his family for an outing.

Margot DeConna, Director of Development for the Alachua County Humane Society, described how deadly the inside of a car can be for pets, particularly during the intense Florida summer.

“The inside of a car can be as much as 20 degrees hotter. On an 80-degree day the car can be 90 degrees. It can only take within 30 minutes for a car to reach 120 degrees and can overheat when even parked in shade with the windows cracked a few inches,” she said.  “Pets don’t sweat the same way we do. They can’t cool their body; that’s why dogs pant, because they don’t sweat. When they get overheated they can go into shock and it can lead to organ failure and death.”

Willcox was found in several violations of Alachua County Sheriff’s Office policy and procedures including performance of duty, neglect of duty and driving, according to a news release from the sheriff’s office.

In addition to serving his suspension, Willcox has been placed on disciplinary probation for three months and will no longer be allowed to serve on the Canine Unit. He received two days of suspension for each violation, which was the maximum number of days he could have received based on comparative disciplinary histories for similar offenses during Sheriff Sadie Darnell’s tenure.

Willcox is currently back at work after he was placed on administrative leave for an unrelated issue following the death of Robbie. Pending the outcome of the internal investigation, he was temporarily assigned to the sheriff’s office training bureau, for deputies, not K9s.

He will not begin his suspension until after his requested Loudermill hearing, to be held on Wednesday. Once that hearing has been completed, his supervisor will schedule his days off.  Typically, those days will be scheduled within the next 30 days, according to sheriff’s office spokesman, Art Forgey.  He will be reassigned somewhere in the department following the hearing and his suspension.

“Nothing can undo the tragedy of Robbie’s death. I am convinced there was no intent by Deputy Willcox to cause harm to Robbie. Before placing judgment, I encourage individuals to read the investigations to gain insight into how much Deputy Willcox loved Robbie and considered him a party of his family.  Deputy Willcox made a horrible mistake and continues to deal with great regret and despair every day.”

Darnell explained Willcox was suffering mental and physical exhaustion from being called to respond as part of their SWAT Team on his day off to assist the Gilchrist County Sheriff’s Office in arresting a barricaded murder suspect.

In his interview with the Office of Professional Standards, Willcox said he spent more time with Robbie than he did with his wife or kids. Robbie was his “best friend.”

The sheriff’s office is in the process of installing additional electronic safety features to all K9 Patrol Vehicles in order to prevent this from occurring in the future.

Carolina is a reporter for WUFT News. She can be reached at news@wuft.org or 352-392-6397.
Previous Matheson Museum Declines To Accept ‘Old Joe’ Confederate Statue
Next As Hawaiian Bees Go On Endangered List, Florida Struggles With Its Own