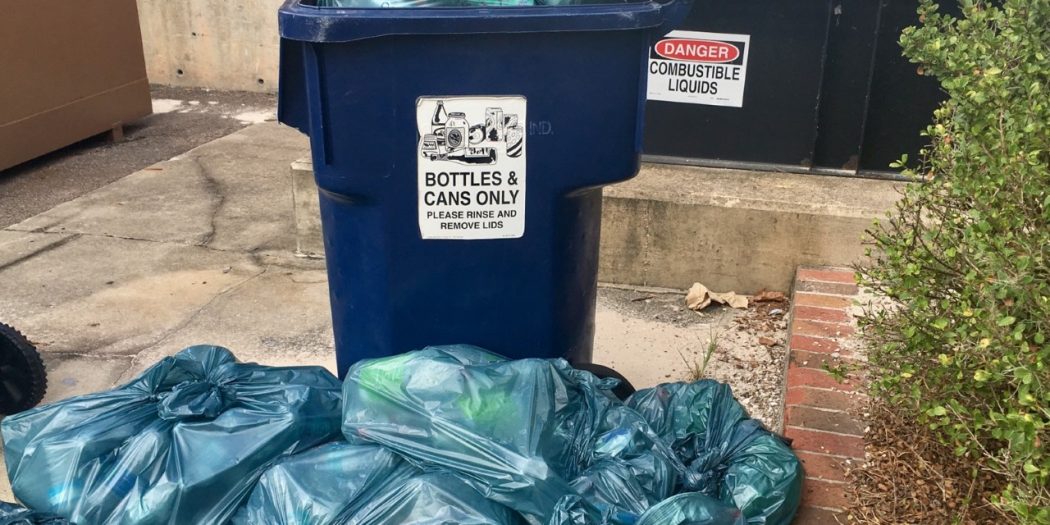 In order to discard their household waste, residents of Lafayette County have to travel anywhere from 10 to 12 miles to get to their nearest waste management facility.

Scott Sadler, Lafayette County public works director, said that the long drive may be driving down the county’s below-average recycling rate. Along with other factors, he believes that for the residents of one of the most rural counties in Florida, recycling just isn’t worth the trip.

“They already have to drive all that way to get rid of their trash. They’re not going to worry about separating their recyclables,” he said.

Sadler said the decreasing amount of money the county receives from state funding and grants for recycling also plays a role in the low percentage.

The total recycle rate percentage is calculated by dividing the total tonnage of recycling credits awarded to the county by the total municipal solid waste collected by the county.

Jeff Klugh, the recycling coordinator for Alachua County, said that the county’s efforts to promote recycling has led to its 61 percent total recycling rate which is the highest in North Central Florida.

Klugh said county school programs that encourage students to recycle and television ads about the benefits of recycling have been important parts of the county’s plan to promote recycling.

“Education has been a huge part to the success in Alachua County,” he said.

Other counties in the state are also making changes in hopes of improving their total recycling rate for 2016.

Dennis Rafferty, the recycling coordinator for Suwannee County, said that the majority of the county’s recycling credits come from tires from local race tracks that are recycled in Auburndale, which helps account for its 35 percent recycling rate.

However, the walk-in policy at the county’s 14 collection facilities has also caused an increase in theft of heavy metals, Rafferty said, which he feels has hindered attempts to achieve a higher recycling rate.

“These places are open 24/7,” Rafferty said. “People just walk in and take the scrap metal. That is going to change.”

Rafferty said Suwannee County plans to terminate its walk-in policy in order to prevent this from happening in the future, and in hopes of increasing its recycling percentage.

Suwannee County’s efforts to improve its percentage are part of a statewide effort to increase recycling rates in the state of Florida.

The Energy, Climate Change and Economic Security Act of 2008 established a statewide goal of achieving a 75 percent total recycling rate by 2020.

On January 4, 2010, former Florida Department of Environmental Protection (DEP) Secretary Michael Sole submitted a program that was put in place to achieve the desired 75 percent recycling rate, according to a report by the DEP.

The program has been successful so far – almost doubling the recycling rate from 28 to 54 percent since 2010, according to the 2015 DEP report. However, some people think that the goal of 75 percent is unobtainable.

Klugh said if there were an increase in organic recycling and the recycling of heavier objects like concrete, there would be a chance to reach the goal. However, he said he doesn’t see that happening as of now.

“Unless we change some things, we’re really starting to top out,” Klugh said.

Rafferty also isn’t convinced that it is possible for Florida to reach a 75 percent recycling rate.

“I guess it’s hard to predict, but right now it seems to be unrealistic,” he said.

Despite his doubts, Rafferty said Suwannee County won’t stop its efforts to reach the statewide goal.

“We’re going to continue to do whatever we can to keep recycling,” he said.

Daniel Smithson is a reporter for WUFT News and can be contacted by calling 850-516-6659 or emailing danielsmithson@ufl.edu.
@DanielTSmithson
Previous Student’s Tweets About Violence Not A Crime, Court Rules
Next Gainesville Buses Have More Routes, Fewer Riders