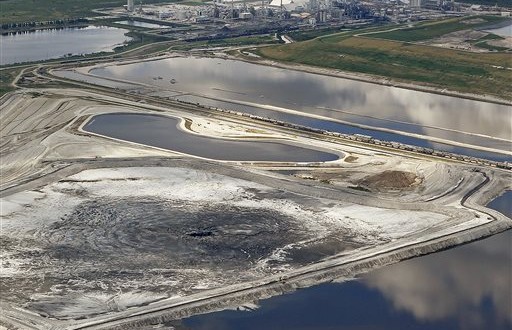 This aerial photo shows the massive sinkhole in Mulberry in Polk County that opened up underneath a gypsum stack at a Mosaic phosphate fertilizer plant in September. Florida has reached a deal with Mosaic that includes the company paying $40 million in remediation. (Jim Damaske/Tampa Bay Times via AP)

Florida has implemented a new rule that mandates that the public must be made aware of pollution incidents.

This comes after a sinkhole in Polk County released possibly contaminated water from a phosphate plant and a separate sewage leak in Pinellas County. Both occurred this month.

Gov. Rick Scott told Florida Department of Environmental Protection Secretary Jon Steverson to create an emergency rule that requires the department, the public and local governments be notified within 24 hours of a pollution incident by the responsible parties, according to a press release Monday from Scott.

And within 48 hours, the public must be notified of any potential public risks to health, safety and overall welfare.

“When we find laws, rules and regulations that aren’t common sense, it is incumbent on us to immediately make changes like we are doing today,” Scott said in the release.

The rule, which takes effect immediately, will last for a total of 90 days, the release says. But the DEP is considering making the rule permanent, and Scott is considering introducing similar legislation.

Such action would amend the previous law, which requires public notification only if the pollution moves off-site from where the incident originally occurred and threatens public health, according to the release.

Mary-Lou is a reporter for WUFT News. She can be reached at news@wuft.org or 352-392-6397.
@@Mary_Lou_W
Previous Clinton, Trump To Return To Fla. After Debate
Next Gators To Name Mississippi State AD Stricklin As Foley’s Replacement