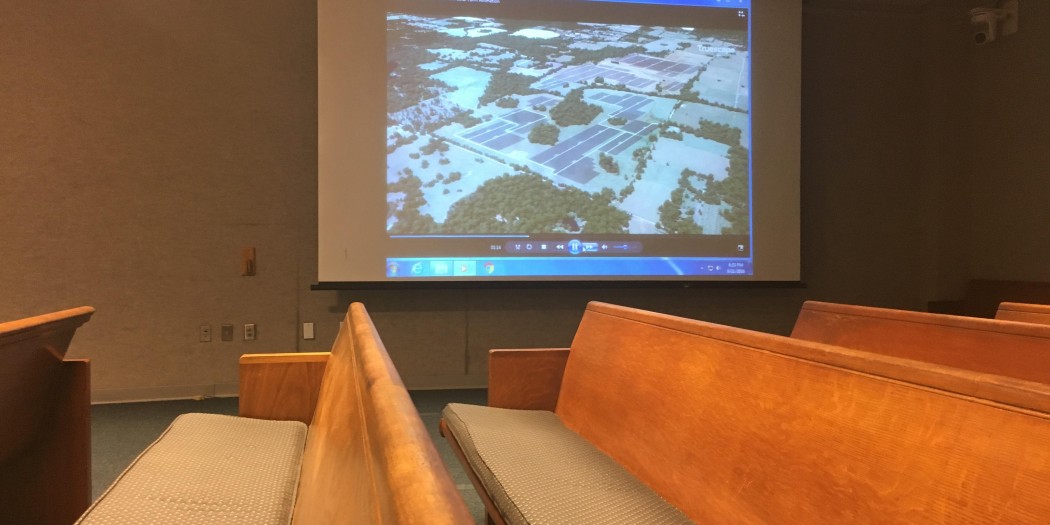 The 684-acre solar array was presented at the Alachua County Planning commission Wednesday in front of FPL employees, the board and the public. (WUFT News/Victoria Todd)

Florida Power and Light’s exception for a 413-acre solar energy facility in Alachua County will have to wait another month for a decision since the county’s planning commission continued the motion to Oct. 19.

FPL is requesting an exception for a total of 684 acres straddling Alachua and Putnam County, East of County Road 219A and North of County Road 1474, to be a photovoltaic solar facility.

The 300,000 solar panels would produce 74.5 megawatts of energy, enough to power 15,000 homes, according to FPL’s solar development manager Geoffrey West.  It would function as a public utility serving energy to its customers, which include Waldo and Hawthorne residents, and would create 200 construction jobs for a year, he said.

The flat plot was chosen for its little vegetation and close proximity to existing transmission lines. It was previously used to grow hay, and West insisted no trees would be chopped on Alachua County’s parcel. Rather, trees would be planted as a vegetation screen to lessen visibility from Bakers Acres Rd. in Putnam County.

The plot also holds wetlands, which senior planner Jerry Brewington said would be buffered and left undisturbed while the solar panels are monitored remotely.

Putnam County resident John Hendrix is not convinced wildlife won’t be left unperturbed and wrote a lengthy letter pledging the removal or relocation of the facility structure and fence along Price Rd.

“I hope that at a minimum the site plan can be adjusted to at least bring some accommodation for the potential future movement of wildlife between the Ordway research station and the Little Orange Creek Preserve,” Hendrix said. The entire purchased property size is 1,300 acres, and West said there’s still plenty of room to roam.

The meeting grew heated when FPL said they preferred a deferral of their project directly after Planning Commissioner Eric Drummond motioned to approve it with the Environmental Protection Department’s condition rather than their own.

The condition in question addresses solar farms and their effects on avian mortality. The Environmental Protection Department proposed FPL gather relevant data on whether there’s a link between solar panels and bird deaths, information that remains largely unexamined in Florida. The utility company would rather comply with the state reporting requirements they already use and not have costly, constant monitoring and additional local regulation.

Dr. Richard Kane, a practicing veterinarian who lives on N Caledonia Ranch, which neighbors the property, was at the meeting to discuss road concerns but also commented on the avian mortality condition, citing FLP’s request as a reasonable one.

“I totally agree with [FLP’s] proposal on condition two. It’s so hyper regulated by the state and feds already, to add county regulations to that, it makes it really hard to manage,” he said.

Another condition focuses on NE County Rd. 219A, and states FPL must repair the road to pre-construction conditions after the end of the project. Kane called the condition retroactive, he said the road was already dangerous to drive on, and thought this was a great opportunity for it to be fixed, but proactively.

Brewington said Putnam County would have its planning commission meeting in November for the 271 usable acres that rests on its side. If Putnam County were to disprove the motion, FPL has no ulterior plan yet, West said.

After the meeting, FPL spokesperson Alys Daly said the next 30 days would be spent refiguring the language and working with staff to reach an agreement.

Victoria is a reporter for WUFT News who may be reached at 352-392-6397 or by emailing vtodd@ufl.edu.
@@victoritodd
Previous Sept. 22, 2016: Morning News In 90
Next Grievances Prompt Ocala Police Chief To Request Paid Leave