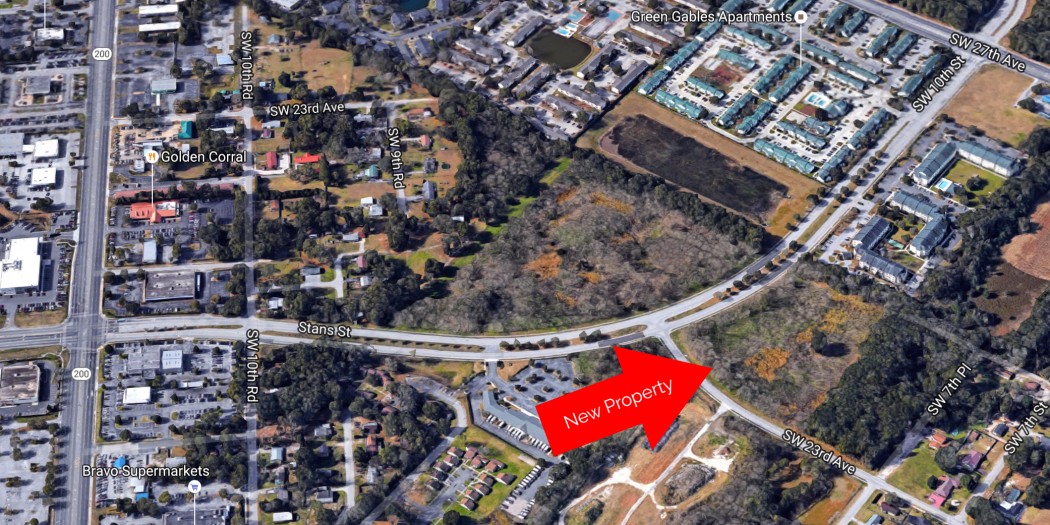 The property given to The Centers to expand their services by the City of Ocala. Photo by WUFT News/Danielle Veenstra)

The Centers, a mental health and substance abuse treatment center, plans to build a new children’s outpatient office on the land, located on the corner of SW 20th Court and SW 23rd Avenue.

According to the Marion County Property Appraiser, the land is worth about $125,000.

Before the Centers can build on the land, they have to meet a few requirements, according to the City of Ocala’s property donation agreement.

As part of the agreement, the Centers must test for environmental hazards. The land they received use to be a landfill and a pistol range.

According to Tye Chighizola, Ocala’s growth management director, the city mainly used the landfill in the ‘60s and ‘70s for construction debris.

The Florida Department of Environmental Protection reviewed the area in 1995 and again in 2012. They restricted the use of the groundwater, but have not been back since, Chighizola said.

The Centers will pay up to $5,000 to test the soil, groundwater and air for harmful toxins.

Ocala Council Pro Tempore President Brent Malever said there is no reason to worry about the land.

“We need to use that area for progress to help people,” he said.

Chighizola said, if The Centers find environmental issues on the property, they can cancel the agreement and the land will go back to the city.

The Centers must also raise a minimum of $3 million in five years.

“I’m sure things are tight for them,” Chighizola said. “But it’s a lot easier to raise money when there’s potential for a building.”

According to Meghan Shay, the chief mission advancement officer for the Centers, the non-profit has already raised $750,000 in private donations. Their single biggest donation was $200,000.

She said the next step is to reach out to businesses for donations and then to the public for more financial support.

“People are really stepping up to invest in this facility for our kids,” Shay said.

The new building will be devoted to children’s mental health services, group therapy and family counseling.

Their current business was built in the ‘70s for adults and crisis care. It lacks space for the 3,000 children they saw last year. And there are about 300 children on a waiting list, Shay explained.

“There’s such a high demand and a lack of availability,” she said.

Once the new 20,000-square-foot building opens, the Centers will be able to help 1,700 more children per year.

“We don’t want to put a child on a waiting list ever again,” Shay said.

Danielle is a reporter for WUFT News and can be contacted by calling 352-392-6397 or emailing news@wuft.org.
Previous Sept. 21, 2016: Morning News in 90
Next License Plate Frames Could Result in Traffic Citation, Fine