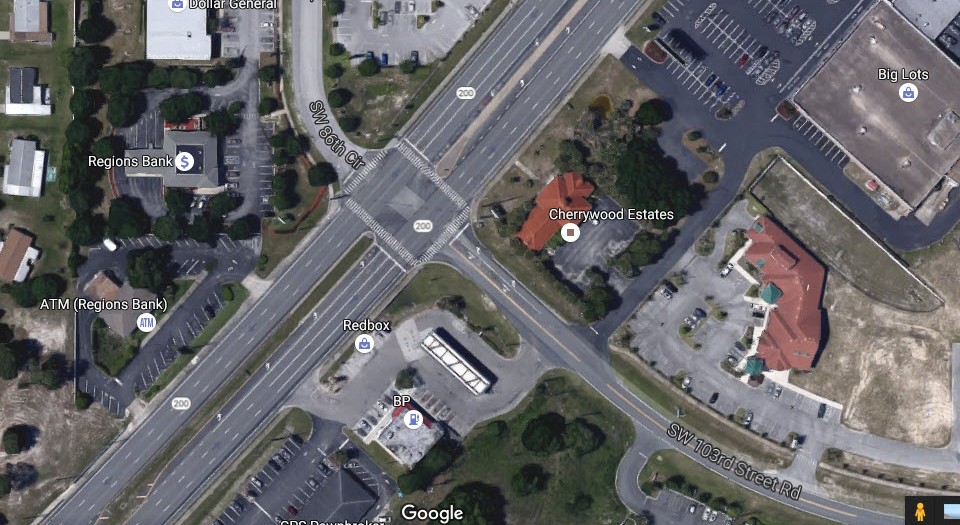 Elisabeth Mitchell can see a variety of animals from her backyard. On some days, she can see hawks soaring. On others, she can see gopher tortoises roaming. On rare occasions, she phones the neighboring farmer when his cows graze too close to surrounding homes.

Mitchell, a 74­-year-­old resident of Cherrywood Estates, knows the days she has of that view are numbered. She recently received a letter stating her house is one of 80 in a 700-­home retirement community affected by the rezoning of the pasture behind her home.

The 90+ acres of land, found at the southwest and southeast corners of Southwest 60th Avenue and Southwest 95th Street, has been named Freedom Crossing by Cherrywood residents. The name originated from plans that date back to 2008 for a commercial development baring the same name.

Coneva Properties, the owner of the land, has applied to rezone the area which will determine restrictions and regulations for building. Currently, the property is classified as A­1, or agricultural zoning. This allows permitted use for general agricultural use, including most farming activities, according to the Marion County land development code.

The fear for residents like Mitchell is not losing the view that is an inevitable outcome they have come to terms with, but rather the effects of living next to a densely populated multi­family housing complex.

Mitchell worries about her safety and the potential increase in crime as a result of the development.

“If we have housing apartments there certainly will be crime,” Mitchell said. “If they put streetlights up I’m going to have it blaring in my windows.”

David McCreight, another resident living within the 300 foot range of the development, said he worries about the effect it will have on the community. McCreight said residents felt comfortable leaving their garage doors open and going out for walks in the early morning and late evenings. He fears these plans will change the peaceful atmosphere of Cherrywood.

“It’s just not the right thing to do,” he said. “This is a very safe neighborhood. That’s why we all bought houses here. We don’t wanna see that change.”

Several other concerns came up as he and other Cherrywood residents brainstormed talking points before the Marion County Commissioners meeting on Tuesday. McCreight worried about the traffic and the possibility of the two residential areas connecting.

McCreight felt so passionate about the rezoning that he spent several days before the meeting collecting petition signatures. Ultimately, he was able to collect 60 signatures. Those 60 residents represented about 42 homes, about half of the homes directly affected by the new development.

That number is not including several snowbird residents who are most likely unaware of the changes. McCreight said the rest of the 700 homes in the community probably don’t have a clue about the changes, and that developers rely on that confusion.

John Rudnianyn, a real estate consultant for Coneva Properties and the agent listed on the application, tried to clear up the confusion during the meeting. He said residents were mentioning six­-story buildings in their statements, but that there would be no such thing.

Rudnianyn said the multi­family homes would be two to three stories max, and that there would be 300­-400 feet of single-­family home plots to buffer the two neighborhoods. Not to mention a street between Cherrywood and the future development.

Chris Rison, senior planner for Marion County Growth Services, presented the application during the meeting. He said that Cherrywood residents should have a sufficient buffer between the multi­family housing development.

“It would be significantly separated from the site. Is it far enough away? That’s person to person,” Rison said.

After both parties made their argument, the county commissioners decided to approve zoning if all of the housing was classified as single­-family housing. In other words, the multi­family housing zoning request was denied.

Once the decision was made, and passed 4 to 1, the 34 Cherrywood residents who came in support shuffled out of the meeting. In hushed tones and triumphant smiles they congratulated each other in the lobby.

Bonnie Clark, a Cherrywood resident of 15 years, was especially pleased with the verdict.

“It was very compatible,” she said. “It’s about the continued uniformity. We can live with that.”

Although they won their fight, Cherrywood residents are still on their guard as word of another upcoming development threatens the peace and tranquility of Cherrywood Estates. With pen and paper in hand, they are already preparing a new petition for the next meeting.

Michelle Tapia is a reporter for WUFT News and can be reached at 352-392-6397 or michellebtapia@ufl.edu.
Previous Alachua County Department Of Health Works To Improve Child Passenger Safety
Next Why The Box, Cox?