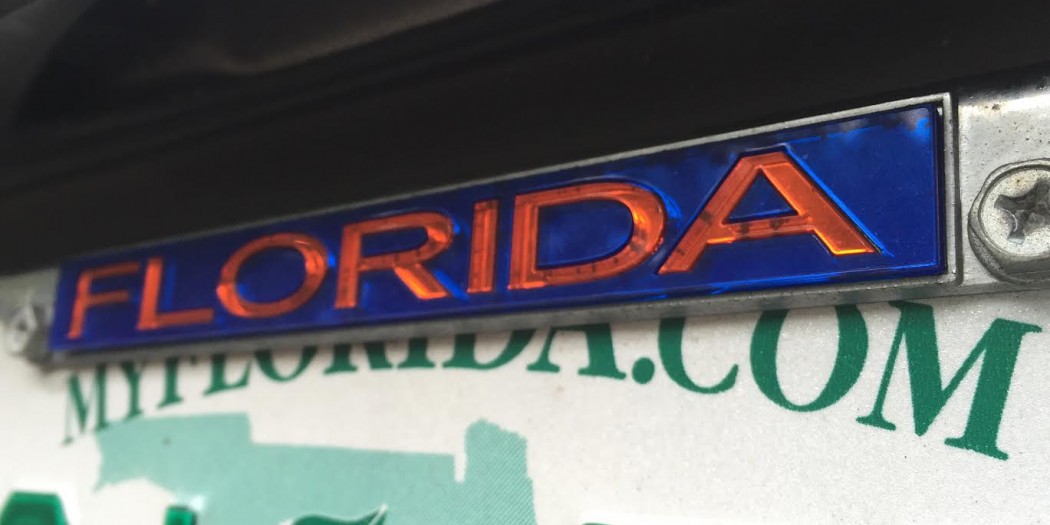 License plate frames covering any part of the face of a license plate—including MyFlorida.com—might be breaking a Florida law. Licence plates must be “clear and distinct,” according to Florida Traffic State Statute 316.605. (Photo by WUFT News/Michaela Steakley)

You might want to think twice before putting a license plate frame on your car.

On September 5, Lakeland woman Victoria Herrington was pulled over in her car and received a citation with a fee of $114, according to Polk County traffic records, because a frame around her license plate covered the words “MyFlorida.com.”

The citation comes from Florida Traffic State Statute 316.605(1) regarding the licensing of vehicles, which states that “all letters, numerals, printing, writing, the registration decal, and the alphanumeric designation shall be clear and distinct and free from defacement, mutilation, grease, and other obscuring matter, so that they will be plainly visible and legible at all times 100 feet from the rear or front.”

Lieutenant Patrick Riordan of the Florida Highway Patrol said that to his knowledge the statute has not been widely enforced in North Central Florida, but enforcement is up to the discretion of each individual officer.

“Traffic law is written and then it’s interpreted by agencies at large and then individually as officers,” Riordan said. He later added, “One size does not fit all as far as how different state statutes are always enforced because you do have individual officers out there trying to make discretionary calls.”

Sarah Bushnell, a manager at Gator Mania at the Oaks Mall in Gainesville said that the license plate frames the store sells do not come in different sizes and that she was unaware of the statute.

“That’s very surprising to me,” she said. “I would think that the company that makes them would be responsible for that.”

While she does not understand the reasoning behind “MyFlorida.com” needing to be visible, she said she understands that the statute is probably enforced for a reason.

The Supreme Court of Florida reviewed the language of the statute in English v. State on May 12, 2016 after Jermaine D. English was stopped by two Orlando police officers who noticed that a tag light and hanging wires on his truck obstructed the view of the plate. The traffic stop resulted in criminal charges against English, according to the Supreme Court of Florida document, and he claimed that the stop was invalid.

The court determined that the language in the statute is “clear and unambiguous” and that it does not suggest “matter external to the license plate may constitute a permissible obstruction under the statute,” therefore the tag light and wires constitute a violation.

Similarly, a license plate frame would be considered external to the plate itself, but, like the tag light in English’s case, it still cannot obstruct the license plate in a way that prevents the face of the plate from being “clear and distinct,” as the statute requires.

Riordan had some tips for drivers who are unsure of the restrictions regarding license plate visibility. He said that following the basics of the statute would generally keep drivers in the clear. These include clearing the face of the plate from all obstructions so it is visible from 100 feet away in the daylight and 50 feet at night, and refraining from using shaded plastic covers, even if it is for the protection of the plate.

Michaela Steakley is a reporter for WUFT News and can be reached at 352-392-6397 or msteakley94@ufl.edu.
Previous Ocala Gives Land To Mental Health Treatment Center
Next Florida Could Have 33 Million Residents By 2070