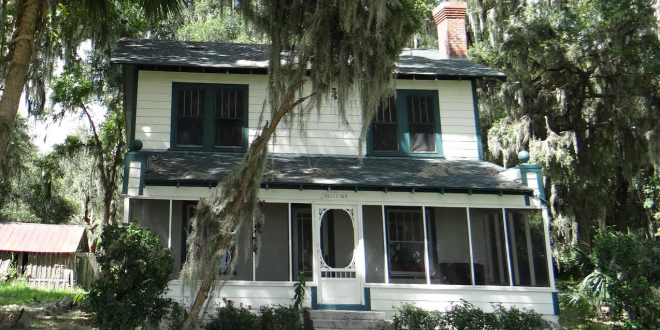 Marion County Parks and Recreation plans to have the Ocklawaha home famous for a 1935 shootout between a crime family and the FBI moved before the end of October. (Photo courtesy Jim Couillard)

The Marion County home that was the site of a shootout between a notorious crime family and the FBI in 1935 is set to be moved to the Carney Island Recreation and Conservation Area before the end of October.

From there, it’ll be turned into a museum.

Jim Couillard, director of Marion County Parks and Recreation, said the department is still meeting with contractors to set a date to move the house in the Ocklawaha community before the planned deadline of Oct. 31.

The lakefront home became famous after “Ma” Barker and her son Fred, who belonged to the Barker-Karpis gang in the 1930s, died during the shootout. They had been living in Ocklawaha under the false name “Blackburn.”

The family that owned the property most recently sold it in June. But the sale didn’t include the house, so the Marion County Board of County Commissioners voted Sept. 7 for the move to Carney Island, which is at Lake Weir southeast of Ocala.

“It’s a very significant house to Marion County, to the FBI and to everyone involved,” Couillard told WUFT News.

The commissioners approved the use of county contingency funds to pay for the relocation, which has an estimated cost of $270,000, Couillard said.

After the move, the county will raise money for the operation of the museum, which will feature a history of the home, he said.

The Florida Department of State’s Division of Historical Resources believes the house is probably worthy of receiving a historic designation for both the nationally known shootout and its architecture, Couillard said.

Diana Illingworth is a reporter for WUFT News. She be reached at 352-392-6397 or news@wuft.org
Previous Fla. Working To Reduce Pollution In Natural Areas
Next As Fla.’s 4,000 Bears Stir, Officials Funding Projects For Reducing Human Interactions

Several counties throughout North Florida have turned to speed tests to determine the areas of their region that most lack consistent internet.