When most people think of vending machines, their mind goes to snacks and drinks. But for the children and people in the Porters community, they think of books.

The vending machine is filled with a variety of books that everyone is welcome to get for free. The goal is to not only get the children but everyone in the community excited about reading, according to Diane Latson-Harden, recreation leader for the City of Gainesville.

The machine was installed in August at the community center and has already impacted the children and the community.

“We’ve opened it up, and we’ve gotten an overwhelming amount of interest in it. It builds interest with the kids in reading,” said Chauncy Walker, a recreation aid at the Porters Community Center. “Having a vending machine with books in it and the colors, it entices the kids to want to get a book out of it, open it up and read it. It has already been beneficial to the center and the community.”

The idea originally came from Kelly Jensen, a recreation aid, after she saw the same type of project being done in Washington D.C. Jensen brought the idea to Latson-Harden and they set to implement the idea in the City of Gainesville.

“It’s more of an educational technique for the kids to enhance their reading skills, their spelling and their enjoyment of reading,” Latson-Harden said. “It’s an enhancement for our children and their learning. We want the best for our kids here at our centers, in reading and in all aspects.”

Porters is the only recreation center in the city to have a book vending machine installed so far. The city’s goal is to have one in each of the other five recreation centers within a year or so, with Eastside Community Center being the likely next center to receive one, Latson-Harden said.

The city chose Porters as the first center because it is a smaller community. It gives the city time to work out the kinks while also being able to see the results of the project faster than at a bigger community center.

The project has cost next to nothing, with books being donated by different people and companies. Over 400 books were donated, according to Latson-Harden.

The vending machine was donated by Compass Group and Canteen Vending.

District Manager at Compass Group and Canteen Vending, Ray Martignetti, was approached about the idea and was immediately on board.

“It was a no-brainer, it was a wonderful thing they were doing,” Martignetti said.

The company donated the machine and configured it to dispense the books for free. It also hosted a book drive to collect books to donate. Compass Group and Canteen Vending has already committed to furnishing the city with additional machines as they need them to expand, according to Martignetti.

“My goal is to get one in each center and to see what difference it makes for children and the community. And to just see the joy of anyone getting a book out of the machine, and just the smile on their face,” Latson-Harden said. 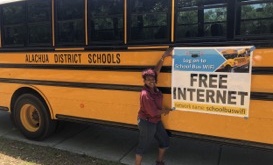